DG ISPR, Asif Ghafoor, has been on a spree of sharing images of protests across India; one of his strategies to lay bare the hideous extremist and fascist mindset of the BJP government that has not only risked the stability of India but also endangers the security of Pakistan. 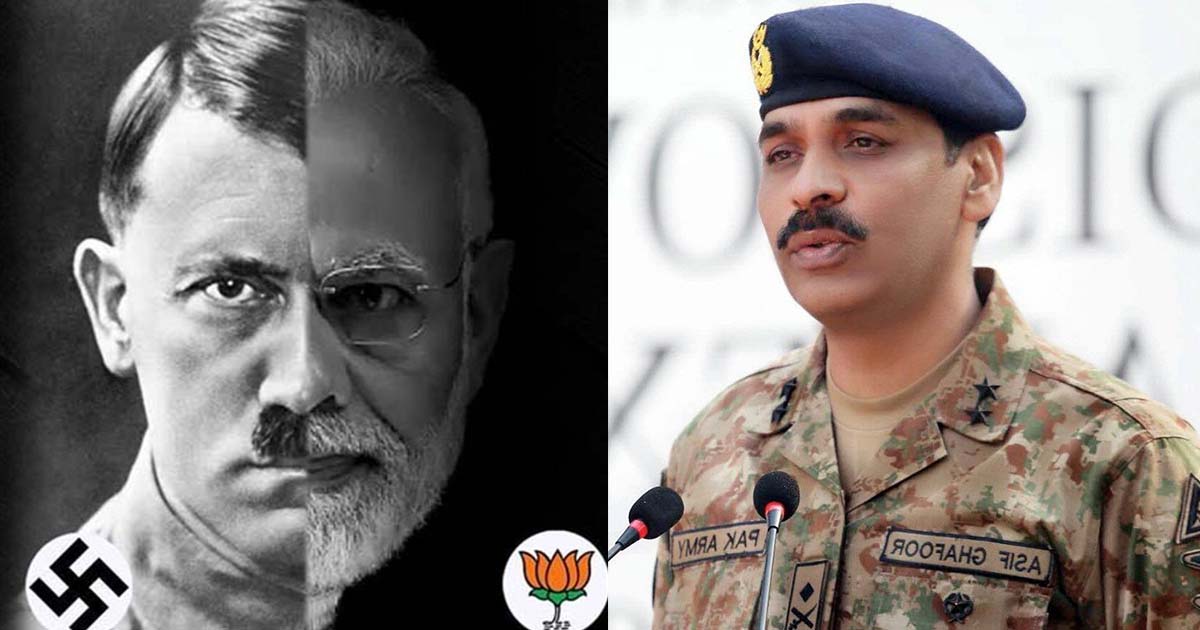 So…. from Indian Occupied Jammu & Kashmir to all across India its #PakistanZindabad.
It’s outcome of continuing siege of IOJ&K, atrocities and obsessed Hindutva. It’s too late now…#KashmirIsPakistan#BeginningOfEnd pic.twitter.com/jkphvnrAcH

He recently shared the short clip of an Indian security official who was describing an incident of a few youngsters aged between 18-22 chanting Pakistan Zindabad slogans during a protest in Meerut, India. The incident was sporadic since earlier, Pakistan Zindabad slogans had been raised several times in Jammu Kashmir and not in other states of India. Earlier, the videos of a security official threatening boys with severe consequences and asking them to go to Pakistan went viral on social media.

DG ISPR shared the second video of the police official admitting for admonishing boys to go to Pakistan if they hate India. He further added that they threatened boys for severe consequences for jeering the Indian police officials with Pakistan Zindabad slogans.

DG ISPR added that such incidents spiral out from the angst against the continuous siege in IOK by Indian forces and communication lockdown in other states to quell protests against CAB. He asserted that such an uproar and defiance of the people mark the end of the brutal Indian state.

From highlighting the persecution of Kashmiris and Indian Muslims, he is utilizing the social media trend to bring forth all that is bad with the BJP government.

If not this, then what else is,
Beginning of the end!#RSSTelangana pic.twitter.com/TLWfy6M3Wq

Earlier, Asif Ghafoor shared the video of a mammoth of protestors who swarmed the streets of India against the controversial CAA. In the captions of the video, he wrote that while jingoistic BJP has failed to quell the turmoil across India such protests are the prolongation of the protests by besieged Kashmiris in IOK.

In a tweet on December 24th, DG ISPR Asif Ghafoor shared the video of a BJP apologist who was seen doing a threatening speech, intimidating Muslims that it is no longer the India of Manmohan Singh or Gandhi but of Narendra Modi and if they wish they can wipe out Muslims from India within an hour.

Then, in one of his tweets, he shared the image from a German Tv that showed the poster of Hitler and Modi together. The Twitter post intended to highlight the fascist outlook of PM Narendra Modi to the international community.

Indian efforts to silent innocent Kashmiris in IOJ&K by keeping them under brutal siege coupled with communication blackout have failed. Their voices now resonate all across India through over 200 million Muslims & minorities.#KashmirIsPakistan#IndiansAgainstCAB#BeginningOfEnd pic.twitter.com/2FDERQJGmq

DG ISPR Asif Ghafoor has been at the forefront in busting the propaganda by India. On several occasions, he resorted to pre-emptive measures alerting the nation and global audience of the vindictive intentions of India to target Pakistan.

Not a news. It’s evident through what’s going on from inside Occupied Jammu & Kashmir to Assam and beyond. Entire world is aware of ongoing Hindutva obsession.

From addressing key press conferences to his social media messages, DG Ghafoor takes a sturdy approach to smash the vile propagandas from India and libelous targets on armed forces within the country.

DG ISPR’s profound comprehension enables him to tailor his speeches and assertions concerning the situation.

From mocking Bollywood for producing a movie on Abhinandan Varthaman, Indian Air Force Wing Commander, he has even slammed the intimidating statements by Indian armed forces on his Twitter account.

Youth is the power. Everyone has the right to live.
Beginning of the … pic.twitter.com/w3tJmitJuQ

ISPR has been relentlessly working towards building a narrative against India, highlighting its complicity in bolstering terrorism in the region.

ISPR’s role has been modified particularly after the mini aerial combat between IAF and PAF in February this year that Pakistan sealed with triumph and India’s abrogation of Article 370 and 35-A on Kashmir in August.

Recently, ISPR received appreciation by the cybersecurity chief of India, Lt Gen Rtd Rajesh Pant for its exceptional and proactive role in information warfare. This is certainly not the first time the nemesis has acknowledged the effectiveness of ISPR. Earlier, Indian General Rtd. Syed Ata Hasnain alerted Indian armed forces of its weak communication strategy against Pakistan in information warfare.

No Deal for Trade with India, Taj Mahal for Trump