The federal government has taken a substantial move to fight back drug abuse among youth in Pakistan. With the launch of the ‘Zindagi App’, PM Khan invited the public to collectively defeat the two ills: child and drug abuse in Pakistan. 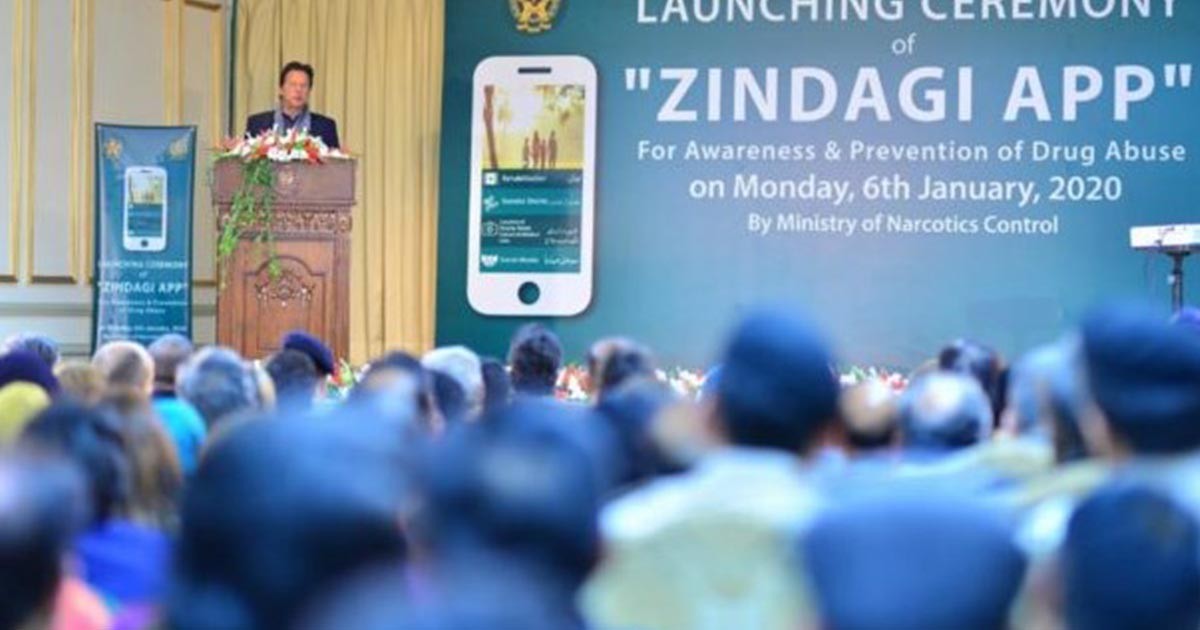 The Ministry of Narcotics Control has launched the ‘Zindagi’ application to fight off the epidemic of drug abuse among youth in Pakistan. Prime Minister Imran Khan graced the ceremony in Islamabad on 6th January and declared the predicament of growing drug addiction among youth a threat to the future of Pakistan in his speech.

The Zindagi application – a comprehensive guide on narcotics and drug abuse. The users can readily access information on prevention, ravages of drug abuse and guidelines on rehabilitation. Also, the app apprises users with the nearest drug rehabilitation centers.

He said unfortunately drugs have reached schools & yet we don’t fully understand or acknowledge this menace. While appraising the initiative, he said, through this app we will be creating awareness & educating our people

With a digital application, the government intends to utilize technology to repress the burgeoning crisis of drug abuse. The initiative is part of the PM Khan’s vision to fight the toughest social stigmas through technology.

PM Khan noted that people must be intimated with the perils and rising incidence of drug abuse in society and the potential threat to future generations. Parents, teachers, and even Ulemas in religious sanctuaries must take up the mission to educate the students on the dangers of drug addiction.

He expressed his remorse that drugs and narcotics have permeated even schools that expose children, the most vulnerable group in society, to narcotics.

PM Khan stressed the utility of the Zindagi application for parents who are often confused about how to deal with children with drug addiction.

He noted that smartphone technology has its boon and bane for society’s two pressing issues: drug abuse and child sexual abuse.

“In both of these matters, mobile phones have aggravated the situation. We have decided to combat both these issues on an emergency basis,” announced PM Khan.

Khan stressed that to deal with two menaces is not only the responsibility of Anti-Narcotics Force and Police, but the whole nation needs to unite to defeat these stigmas that endanger the future of children.

He also launched a book on awareness of drug abuse. He instructed that books on drug abuse must be included in the schools to educate students on the subject.

A United Nations report recorded that, nearly, 7.6 million people in Pakistan are drug addicts: 78% males and 22% females. The number of drug addicts increasing at the rate of 40,000 people annually in the country, making Pakistan the most drug-affected country.

Hats off to IK, this is the first PM who cares so much of common people of Pakistan.

The government’s initiative invited praise from social media users on Twitter. The launch of the Zindagi Application is hailed the government concrete move to address the stigma of drug abuse in Pakistan.

Shaan lashes out at ‘Arth’ detractors as movie flops

Why Coronavirus is a grave security challenge for Pakistan