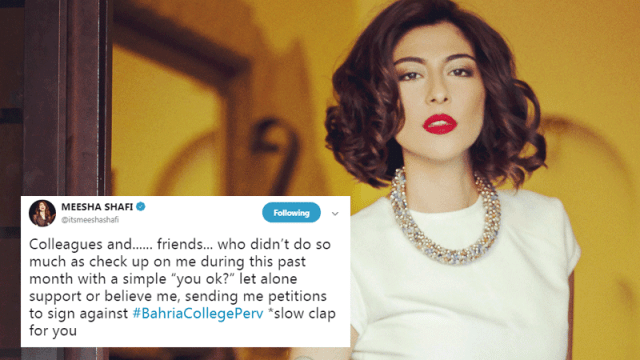 Prominent members of Pakistan’s fashion and entertainment industry have signed a petition that calls for constructive steps to deal with the cases of sexual harassment in the industry. The petitioners have pledged to support Meesha Shafi and all others victims of sexual harassment.

After storming Hollywood, the campaign against sexual harassment first resounded in Pakistan when Meesha Shafi made a startling accusation on pop icon Ali Zafar for sexually harassing her. On April 19, she broke the internet after tweeting, “I have subjected, on more than one occasion, to sexual harassment of a physical nature at the hands of a colleague from my industry: Ali Zafar”

However, Meesha Shafi is struggling to draw a tangible support from her peers in the industry as many have vocalized their support for Ali Zafar while others have opted for silence on the matter. Shafi is also facing a defamation suit from Ali Zafar, who has also fined her for Rs.100 million.

With this in mind, the petition has urged to ‘re-evaluate the current approach towards what we consider ‘evidence’ of such incidents” as our law has failed to protect the victim and in fact “aided the accused and silence the voice of the victim/survivor.’ The group of 100 petitioners believes that the laws are inept to decisively deal with the cases of harassment.  There is a need to provide an encouraging environment to victims who are fearful to speak.

Once they come forth with their stories, the pressure will bring in the laws that can tackle harassment. Renowned names from the fashion industry including Khadija Rahman, Khadija Shah, Rehan Bashir, and the transgender model, Kami Sid along with Pakistani writers like Bina Shah and Mahwash Ajaz have signed the petition.

Bina Shah signed the petition and said ‘it was a strongly-worded statement about sexual harassment and what happens to those victims who speak out against it.’ She added, “They need support and solidarity and by signing, I felt I was able to give that. I liked its specificity to the arts and institutes that teach the arts and other cultural practices. I’ve been seeing various blogs come out in the media saying that the #MeToo movement isn’t relevant to Pakistan, or that it will fail because it has no context, and this petition takes a firm stance against that defeatist, sexist attitude as well.”

Khadija Rahman stated that, “This is the sort of petition that everyone should sign. We cannot allow women who are harassed to be shamed like this so that others become afraid of speaking out. It’s very regressive and I signed it on behalf of all the many women I know who have been sexually exploited at some point or the other in their lives. What a woman wears or what lifestyle she follows is completely irrelevant to this issue. Even women wearing veils get harassed.”

“The fact that many of the people who are shaming Meesha are women is particularly shocking because I know that most of them have personally suffered harassment or have friends who have endured it. How can they doubt another woman for speaking out?” she said.

Further to this, designer Rehan Bashir said he is a big supporter of equal rights for women. “I am a big supporter of equal rights and women’s rights in Pakistan as well as on a global level,” said Rehan Bashir. He said that the culture of expecting women to shut up whether she is an empowered woman like Meesha Shafi or any other woman belonging to lower strata must be changed.

Bashir said he knows many women around him who have been harassed but are silent due to fear of public indignation. He added, “I know so many other women who have been harassed but they refuse to speak out about it because they don’t want to be publicly maligned. This culture of silence is disturbing and the reason why I, and many others, chose to sign this petition is that we felt that we could no longer stay compliant in the unnecessary shaming of a woman just because she spoke out.

Read more: Meesha Shafi gets support from UN women In ‘Me Too’ campaign

It’s not about taking one person or the other’s side, it’s about standing up against a wrong that is common in our society. This victim shaming has to stop and it’s about time the men think twice before they behave in an inappropriate, unwelcome way with a woman.” The opponents of the petition have pointed out that campaign of sexual harassment is particularly irrelevant in Meesha Shafi and Ali Zafar case. They believe the case must not be treated like a typical case of harassment – which is usually the consequence of an abuse of power – since both of the people involved are equally empowered and claimed to be friends at a point.