Pakistan has offered security to Qatar as the later is going to host the FIFA World Cup in 2022. President Dr. Arif Alvi made the offer while meeting the commander in-chief of Qatar. Will Qatar accept the offer? 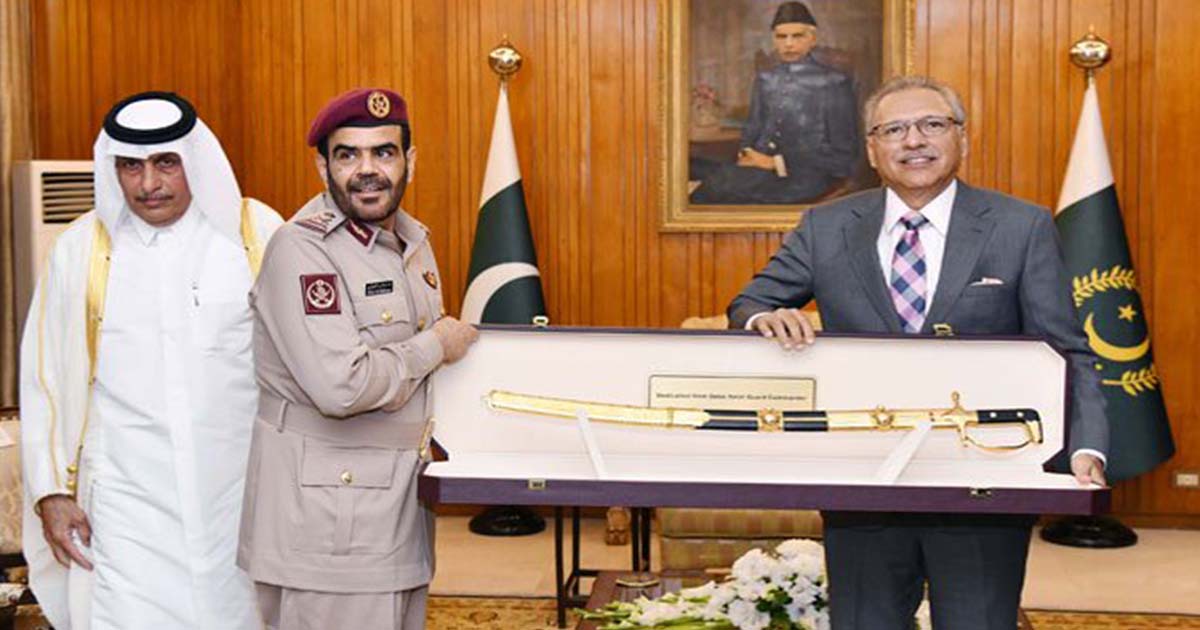 President Arif Alvi offered Qatar of providing security for the next FIFA World Cup scheduled to be held in the Gulf country in 2022, stressing that the country had vast experience in that domain. The President urged the state of Qatar to enhance economic ties and defense relations with Pakistan.

The FIFA Club World Cup is an international men’s association football competition organized by the Federation International de Football Association (FIFA), the sport’s global governing body. It attracts people from across the world to watch the tournament which helps the host country to present its soft image before the world.

According to details, while talking to Commander of the Qatar Emiri Guard, Maj-Gen Hazzaa Bin Khalil Bin Mansour Al-Shahwani, who along with a delegation called on him in Islamabad, Dr. Alvi said a lot of scope existed between the two countries to include defense export and joint production ventures.

President Arif Alvi offered Qatar of providing security for the next FIFA World Cup being held in the #Gulf country in 2022, stressing that the country had vast experience in that domain. pic.twitter.com/NO5ojVtcGG

The president underscored that having vast experience in the domain of security and the professionalism of its armed forces, “Pakistan can provide Qatar security for Football World Cup 2022,” according to Radio Pakistan.

Alvi urged Qatar to support Pakistan in its endeavors to highlight Indian human rights violations in occupied Kashmir before the world. He stressed the need for the international community to persuade India to resolve the Kashmir dispute in accordance with UN Security Council resolutions. “The fascist Indian regime is flagrantly violating the human rights of Kashmiris by revoking the special status of occupied Kashmir and by suspending their civil liberties. The Indian government has adopted a hostile attitude towards all its minorities,” the report quoted Alvi as saying.

The Qatari commander called on Army Chief General Qamar Bajwa at the GHQ in Rawalpindi. Matters of mutual and professional interest and regional security situation were discussed in the meeting.

Emir of Qatar, Sheikh Tamim bin Hamad Al Thani, was in Pakistan for a brief one-day visit in the third week of June 2019. Emir, and his delegation, arrived in the evening of Friday 22, he was personally received, at Noor Khan airbase, (known to residents of Islamabad as the old airport) by Imran Khan, Pakistan’s premier, who personally drove him to Prime Minister’s house in Islamabad where a one on one meeting took place between the Emir and the Prime Minister of Pakistan.

On invitation of PM Imran Khan, HH Sheikh Tamim bin Hamad Al Thani, Emir of the State of Qatar, arrived in Islamabad today on a two-day State Visit to Pakistan. He is accompanied by a high-powered delegation comprising key Ministers & Senior Officials.#PakistanWelcomesQatariEmir pic.twitter.com/0p7GhNujyC

During the visit, Qatar announced keeping $3 billion in the State Bank of Pakistan to support the country’s balance of payments. Three memoranda of understanding (MoU) were signed on Saturday, between Qatar and Pakistan, in trade and investment, tourism and business events, and exchange of financial intelligence and then Emir left in the early afternoon of June 23.

Upon their arrival, the delegation was received by Qatar’s Minister of State for Foreign Affairs Soltan bin Saad al-Muraikhi at the airport. Khan met the Qatari Prime Minister but he also met Emir, Sheikh Tamim bin Hammad and amongst other issues export of skilled labor to Qatar was discussed which shows the priority Islamabad attached to the issue – and which makes it so important to understand the economic impact of FIFA World Cup 2022 on the region.

In December 2018, Qatar had already opened a visa facilitation center in Islamabad for swift processing of visas of members of the Pakistan workforce wishing to work in Qatar.

Doha has also promised 100,000 jobs for Pakistani workers, and the government is in talks with the Qatari government to adjust skilled members of the labor force returning from Saudi Arabia. Observers and policy experts on Gulf economies (like Author, Mehran Kamrava, ‘Qatar: Small State, Big Politics’) believe that workers from India and Pakistan suit employers and contractors because they are not part of the political currents of the region – unlike the workers from Egypt, Yemen or Morocco.

APP - 22 September 2021
The signing of agreements was part of the PM's comprehensive Civil Service Reforms Agenda, under which the government initiated a new performance management system that brought the entire federal government together.

Martin Kobler says will return to Pakistan as a tourist

Iran nuclear deal: How to save it?