A Palestinian teenager was shot dead by Israeli troops on Wednesday in the West Bank city of Hebron, the first Palestinian killed in protests against US President Donald Trump's Middle East peace plan. 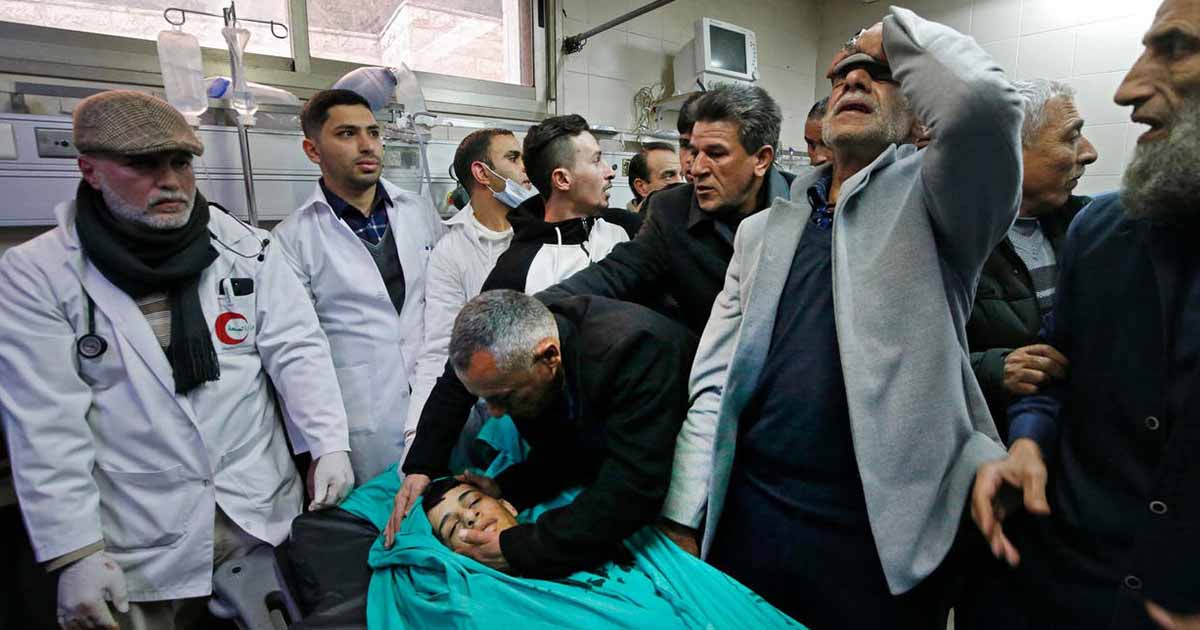 A Palestinian teenager was shot dead by Israeli troops on Wednesday in the West Bank city of Hebron, the first Palestinian killed in protests against US President Donald Trump’s Middle East peace plan.

The Israel army said troops responded to a “violent” rioter armed with a Molotov cocktail.

Hebron, a traditional hotspot in the occupied West Bank, has seen angry demonstrations against Trump’s controversial peace proposal, which has been rejected by the Palestinians as blatantly pro-Israel.

The Palestinian health ministry said 17-year-old Mohammed al-Haddad was shot dead. He was “killed by a bullet that penetrated his heart in clashes with occupation (forces) in the Bab al-Zawya area of Hebron”, it said in a statement.

A Palestinian teenager was shot dead by Israeli troops on Wednesday in the West Bank city of Hebron, the first Palestinian killed in protests against US President Donald Trump's Middle East peace plan.https://t.co/lN9PfouuUC

Witnesses said about 15 demonstrators had been throwing stones at Israeli troops.

Images from the Palestinian official news agency WAFA showed the body of a young male demonstrator being carried away by fellow protesters towards a vehicle and then being placed in an ambulance.

Haddad was later pronounced dead at a Hebron hospital.

“During a violent riot which was instigated a short while ago in the city of Hebron, (Israeli) troops identified a Palestinian who hurled a Molotov cocktail at them,” Israel’s army said in a statement.

“The troops responded with fire in order to remove the threat,” it added.

“Over the past few days, violent riots have been instigated in the city of Hebron adjacent to the Jewish community with dozens of Palestinian participants hurling rocks and Molotov cocktails at troops and setting tires on fire,” it said.

Trump’s peace proposals, which he unveiled in Washington last month alongside Israeli Prime Minister Benjamin Netanyahu with no Palestinian representatives present, have sparked anger among Palestinians.

The plan gives Israel the green light to annex Jewish settlements and another key territory in the West Bank, including within Hebron, where a few hundred Jewish settlers live in the centre of the Palestinian city of around 200,000.

The Trump plan also calls for Jerusalem to be entrenched as Israel’s “undivided capital.”

Under the plan, a prospective Palestinian state could only be established under strict conditions, with its capital located in Abu Dis, a rundown neighbourhood on the outskirts of Israeli-annexed east Jerusalem.

Palestinian president Mahmud Abbas is heading to the United Nations next week to push for a Security Council resolution condemning the Trump initiative.

Any such resolution will almost certainly be vetoed by the US.

The Trump proposal has also been rejected by the Arab League and the Organisation of Islamic Cooperation, and bitterly denounced in Gaza, which is controlled by the Palestinian Islamist group Hamas.

Since the plan was announced, rockets, mortar shells and explosive balloons have been launched almost daily from Gaza into southern Israel, provoking retaliation.

In a further punitive move, Israel has restricted Gaza fishing activity, a frequently used sanction against the coastal enclave.

Palestinian President condemns US as biased