Forced conversions to Islam: Ill fate for Hindus in Pakistan

Forceful conversion are now an axiomatic fact occurring in our country on a large scale, especially in Sindh province which accommodates most of the Hindu population in Pakistan. Premier Imran Khan, who envisions transforming Pakistan into a state of Madina, must take notice of the injustice and atrocities executed against non-Muslim minorities in the Islamic republic of Pakistan and constitute a special body with the mandate to look into this matter gravely and suggest measures to arrest this shameful practice of forced conversion which is bringing notoriety not only to our beloved country but also to our religion, Islam. 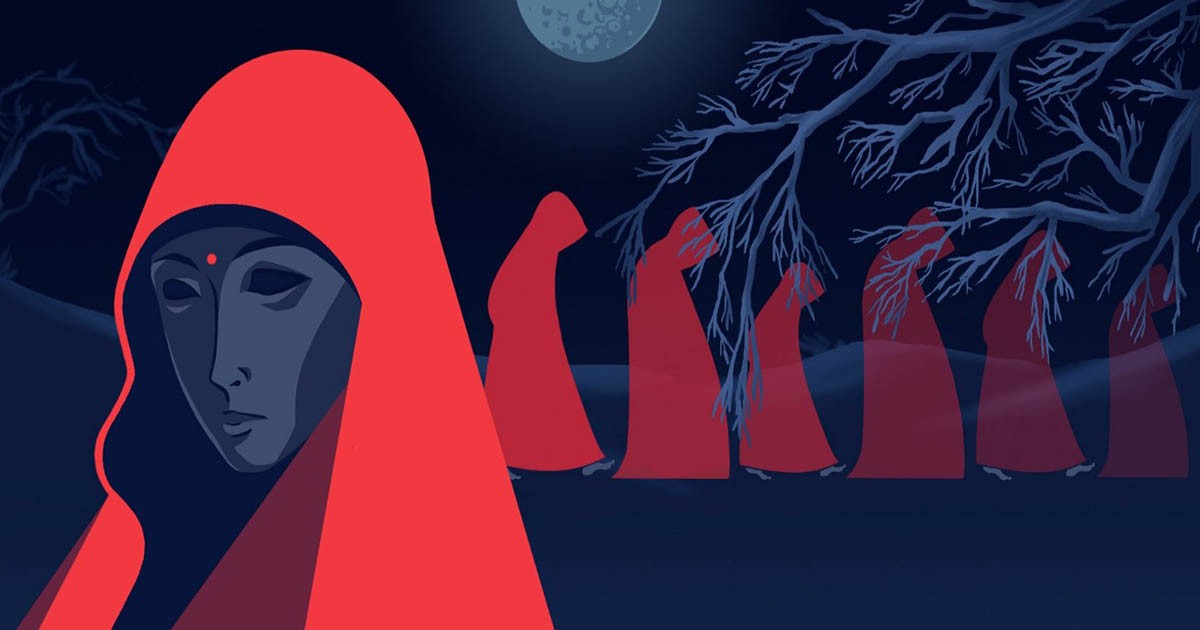 The building of civil court Jacobabad Sindh reverberated with slogans of “ALLAH O AKBAR” when a newly wedded couple comprising of bride named Mehak kumari re-named as Alizah after conversion to Islam, reached to get their statement recorded before magistrate. Sarcastically, the whole scene gave the impression as if my Muslim brothers had conquered an impregnable forte.

For a moment, I was struck dumb, delving into meditation over what was there to celebrate as a Muslim since it was a matter between two souls who culminated their love-affair into marriage and since it was impossible for a Hindu girl to consummate his love without being Muslim, she out of such compulsion, had to embrace Islam.

According to the Pakistan Hindu Council, more than 8 million Hindus currently live in different parts of Pakistan, making up 4% of the country’s population of 197 million

Factually speaking, the whole episode of such conversion by a Hindu girl to Islam from beginning to end lacked the very narrative as advanced by my brothers in faith that the girl, having been impressed by the true faith (Islam), decided to embrace it and marry a Muslim boy. Hence, dragging religion into this love story by either side for sure, would be unfair and unjust. It is nothing but exploitation of religion for personal gains. The Hindu community, therefore, should not attribute the act of an individual Muslim to whole Islam and subject the religion of nearly 1.5 billion Muslims to unwarranted stricture.

On the other hand, the Hindu parents of the girl went into uncontrollable emotions when their daughter, whom they mothered for a long period of sixteen years, recorded that she fears insecurity from her parents and hence prayed the court for protection from her parents. It was really a heart-wrenching moment for everyone present in the court. The more shocking aspect of the story was that the parents were subjected to humiliation and ignominy in the name of that religion which holds parents in high esteem and equates hurting parents with an unpardonable sin.

Additionally, the parents of the girl apportioned allegation of abduction by a Muslim boy and appraised the court that their daughter was forcibly converted to Islam and then married. However, the matter is sub judice; let the court conclude by unearthing the truth of the matter.

As far as the matter of forceful conversion is concerned, it is now an axiomatic fact that it is happening in our country on a large scale, exclusively in Sindh province which accommodates a lot of Hindu population. According to the Pakistan Hindu Council, more than 8 million Hindus currently live in different parts of Pakistan, making up 4% of the country’s population of 197 million. A majority of them reside in Sindh where they constitute 6.6 % of the population, mostly concentrated in urban areas of the lower Indus valley.

The famous seminaries of Sindh Bharchoondi sharif and Amrot sharif support such forceful conversions. These seminaries patronize and encourage such forced conversions to Islam by providing the abductor not only with shelter and security but also with finance to lead his future life comfortably. Encouraged by such humongous support by these religious fanatics, our Muslim youth is now resorting to this inhuman practice of abduction and forced proselytism.

Rinkle Kumari was 16 years old when she was abducted, allegedly forcibly converted, and married to her kidnapper.  Twice she cried and pleaded to go back home to her parents. Once before the civil court, and then, before the Supreme Court when it took up a pending petition on forced conversions initiated by the Pakistan Hindu Council

Dr. Mehdi Hasan, Chairperson of Human Rights Commission of Pakistan (HRCP), while highlighting this fact remarked “Many madrassas in interior Sindh are actively involved in undertaking forced marriages. They are given patronage by political parties and influential figures in the province which further renders the minorities helpless.” He said minorities did not feel secure in a country where no legislation exists to protect the rights and dignities of marginalized communities. “It is the responsibility of the government, state, and the parliamentarians to make stringent laws to discourage the rising trend of forced conversion and unsolicited marriages. The matter becomes more atrocious when the children below the age of 18 years are forced to marry in violation of laws,” he added.

According to this year’s HRCP report, at least 1,000 girls are forcibly converted to Islam annually, the majority of them being Hindus. The lack of exact data on conversion cases owes to the fact that a vast majority of the instances aren’t reported. Moreover, The Human Rights Commission of Pakistan believes that more than 20 Hindu girls are kidnapped every month.

However, the parents of the victim remain deprived of getting justice in our country for justice is the privilege reserved for the wealthy and powerful. The case of Rinkle Kumari should still be fresh in our minds. Rinkle Kumari was 16 years old when she was abducted, allegedly forcibly converted, and married to her kidnapper. Twice she cried and pleaded to go back home to her parents. Once before the civil court, and then, before the Supreme Court when it took up a pending petition on forced conversions initiated by the Pakistan Hindu Council. However, despite this, when the Supreme Court reassembled after a lengthy adjournment to hear the case, Kumari had somehow changed her statement and then accepted that she had changed her religion and married of her own free will. No proceedings ever initiated to learn that what happened to change her mind, but we can all guess, with a high degree of certainty, that her kidnappers coerced her to capitulate to their demands.

To put an end to this unjustified and atrocious practice of forced proselytism, in 2016, an effort was made with a bill being introduced in the Sindh Assembly. The bill was, undoubtedly, a welcome first step. For example, it provided for judges and the police receiving sensitization training on this sensitive issue, and that women be placed in a shelter, or in the custody of their parents during court proceedings in which the conversion and subsequent marriage was under challenge (normally, the woman is asked to remain with her husband during the entire proceedings).

Perhaps, the most significant part of the bill was that it prohibited someone from changing their religion until they were 18 years of age. Despite the bill being passed by the Sindh Assembly, the governor of the province, on the alleged urgings of Mr. Zardari, refused to sign it. The opposition to the bill was rooted in the proposed age restriction. Opponents said that one could convert to the majority faith no matter what their age was.

Inter alia, The Hindu Marriage Act was also passed in 2017, which in addition to providing regulation of Hindu marriages was also designed to deal with the issues of forced marriages and conversions. However, its implementation has not seen the light of day so far.

Forced proselytism is neither condoned by our religion and nor by the constitution of our country. Islam repudiates this practice in categorical terms. It says “let there should be no compulsion in religion” (2:26) and in another Surah which specifically deals with the religious freedom called “Al-kafirun” it says “say you, O infidels! I worship not that you worship and nor you worship what I worship. And I shall not worship what you worshipped, and nor you shall worship what I worship. For you, your religion, and for me my religion.” The Holy Prophet was also a staunch advocate of the rights of non-Muslim minorities. In one of his sayings he (SAW) said: “whoever hurts a” ZIMMIE” (a person belonging to non-Muslim minority), hurts me and whoever hurts me, hurts Allah (Al-tibrani).”

Further, Article 20 of the constitution of Pakistan also guarantees religious freedom to every citizen of Pakistan. Besides, the founding father of our country M.A Jinnah also upheld the principles of religious freedom. He once remarked: “You are free; you are free to go to your temples, you are free to go to your mosques or to any other place or worship in this State of Pakistan. You may belong to any religion or caste or creed — that has nothing to do with the business of the State”

To encapsulate, Premier Imran Khan who envisions transforming Pakistan into a state of Madina must take notice of this injustice and atrocity being done to non-Muslim minorities in the Islamic Republic of Pakistan and constitute a special body with the mandate to look into this matter gravely and suggest measures to arrest this shameful practice of forced conversion which is bringing notoriety not only to our beloved country but also to our religion, Islam.

To add, this act of some handful Muslims of our country severely impinges on our national integration and cohesion for it fosters antipathy between the two communities (Hindu and Muslims) living together peacefully for years in our country. Hope, people at the helm would understand the sensitivity of the issue and devise an effective strategy to cope with this shameful practice of forced conversion otherwise the dream of transforming Pakistan, as envisioned by PM Khan into a state of Madina, would never be materialized.

Free and fair elections: Can democracy in Pakistan be resurrected?