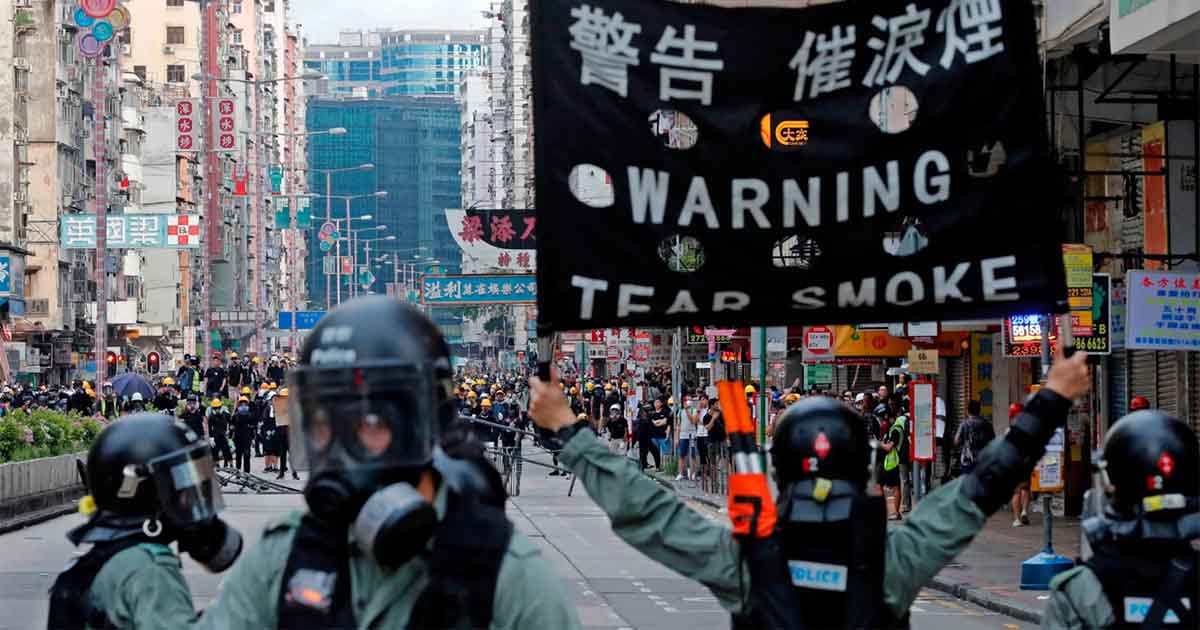 Hong Kong police said Saturday they have arrested three pro-democracy lawmakers over a brawl in parliament, deepening the city’s crisis a day after the death of a student sent tensions soaring.

The international finance hub has been upended by five months of huge and increasingly violent pro-democracy protests but Beijing has refused to give in to most of the movement’s demands.

With the city bracing for a 24th consecutive weekend of rallies, police brought charges against three key pro-democracy lawmakers while four other lawmakers said they had been ordered to attend a police station later Saturday to be booked. They face up to a year in jail if convicted.

In one incident, an officer fired a live warning shot as his unit faced off with protesters throwing projectiles.

The charges relate to chaotic scenes that broke out within a legislative committee in May as pro-democracy lawmakers tried to stop a controversial bill being discussed that would allow extraditions to authoritarian mainland China.

At the time, city leader Carrie Lam was fast-tracking the bill through the legislature, a move that went on to ignite record-breaking street protests in which millions marched.

“The protests that have been going on for five months are yet to finish but the government is already launching massive arrests of pro-democracy legislators in collaboration with the police,” the lawmakers said in a joint statement.

One of the lawmakers said he would refuse to turn himself in. “If you are accusing me of violating laws in the Legislative Council, come here and arrest me. I will be right here waiting,” Lam Cheuk-ting told reporters at a joint press conference.

Hong Kong’s legislature is quasi-democratic, with half the seats popularly elected and the rest chosen by largely pro-Beijing committees, ensuring the chamber remains stacked with government loyalists. Opposition to the government comes in the form of a small band of pro-democracy lawmakers who win their seats in local elections.

The lack of fully free elections — and especially the fact that the city’s leader is appointed by a pro-Beijing committee — has fuelled years of protests that have culminated in the latest unrest.

At the time, city leader Carrie Lam was fast-tracking the bill through the legislature, a move that went on to ignite record-breaking street protests in which millions marched.

The tinderbox atmosphere intensified on Friday after 22-year-old student Alex Chow died from a fall during recent clashes with police. Although the precise chain of events leading to his fall are unclear and disputed, protesters have made alleged police brutality one of their movement’s rallying cries and have seized on the death.

In one incident, an officer fired a live warning shot as his unit faced off with protesters throwing projectiles.

The city is holding district council elections on 24 November with the pro-Beijing camp bracing for heavy defeats. Since this summer’s pro-democracy protests kicked off, voter registration has soared and the pro-democracy camp is fielding candidates in every constituency for the first time.

But there are also concerns the elections could be called off given the spiralling violence. On Wednesday, one of the city’s most stridently pro-Beijing politicians was wounded in a knife attack by a man who pretended to be a supporter.

Protesters have made alleged police brutality one of their movement’s rallying cries and have seized on the death.

That assault came three days after a Mandarin-speaking man shouting pro-Beijing slogans knifed at least three pro-democracy protesters and bit off the ear of a local district councillor. Pro-democracy lawmakers called for protesters not to give the government an excuse to cancel the elections because of the violence.

“The district council election is a de facto referendum, in which all Hong Kong people can respond to the social problems, the unjust governance and the police brutality triggered by the extradition bill,” lawmaker Tanya Chan said on Saturday.

But further unrest seems likely given that the protest movement is largely organised online by activists who favour confrontations with the police who are themselves responding with increasingly hardcore tactics as each month passes.

Police have repeatedly denied any allegations of wrongdoing in relation to Chow’s death. Rallies and prayer vigils are expected on Saturday and Sunday evening and there have been calls for a general strike on Monday.

Previous articleThings to Consider before Replacing your Old Boiler
Next articleLebanon: Protests Force PM’s Resignation and a New Cabinet

24 June 2021
Previous articleThings to Consider before Replacing your Old Boiler
Next articleLebanon: Protests Force PM’s Resignation and a New Cabinet

Why is MQM-P going to organize protest against the Sindh government?