Amid China tightening the screws on their homeland, many Hong Kongers are looking to get citizenship of other countries and flee the unstable territory. Canada, Britain and Taiwan have offered sanctuary to disturbed Hong Kongers. It remains to be seen what becomes of the territory that they vacate. 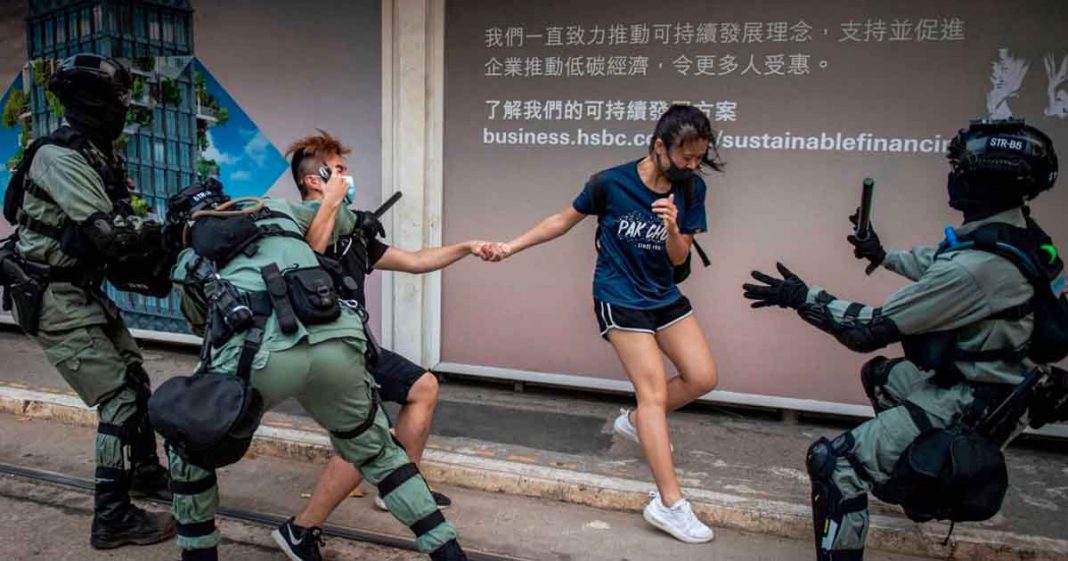 Hong Kong protester Crystal has yet to tell her parents she has fled overseas to seek asylum in Canada, one of a growing number of residents choosing self-exile as Beijing tightens control on the politically restive territory.

The 21-year-old student spent months on the front lines of the pro-democracy protests, which first exploded with huge marches last June and descended into increasingly violent battles with riot police as each month went by.

A year on, she is waiting to hear if she will be granted refugee status on the other side of the world.

“My friends and family don’t know about my situation,” she told AFP, asking for her full name and location to be withheld — like all applicants interviewed for this piece.

“They all thought I went to study abroad.”

Hundreds more have relocated to democratic Taiwan, which under President Tsai Ing-wen has said it will try to accommodate Hong Kongers seeking to escape with freedoms sliding at home.

The current trickle could become an exodus after Beijing announced plans to impose a sweeping national security law on Hong Kong in response to the protests. China says an anti-subversion law is needed to tackle “terrorism” and “separatism”.

Opponents fear it will bring mainland-style political oppression to a business hub supposedly guaranteed freedoms and autonomy for 50 years after its 1997 handover to China by Britain.

Prime Minister Boris Johnson, meanwhile, said London would not “walk away” from Hong Kongers worried by Beijing’s control over the international business hub.

Johnson wrote in a column for The Times newspaper and the South China Morning Post that he would offer millions of Hong Kongers visas and a possible route to UK citizenship if China persists with its national security law.

In his column, Johnson wrote that if China proceeds to justify the “fears” of Hong Kongers, “then Britain could not in good conscience shrug our shoulders and walk away; instead we will honour our obligations and provide an alternative.”

About 350,000 people in Hong Kong currently hold British National (Overseas) passports, which allow visa-free access to Britain for up to six months.

Another 2.5 million people would be eligible to apply for one.

Johnson said Britain could allow BN(O) holders to come for a renewable period of 12 months “and be given further immigration rights, including the right to work, which could place them on a route to citizenship”.

Britain says it views the proposed law as a breach of the 1984 agreement with Beijing ahead of the handover guaranteeing Hong Kong’s freedoms and a level of autonomy — a deal that formed the bedrock of its rise as a world class finance centre.

“Britain does not seek to prevent China’s rise,” Johnson wrote. “It is precisely because we welcome China as a leading member of the world community that we expect it to abide by international agreements.”

Britain has said it will extend residency rights for nearly 3 million Hong Kongers eligible for British National (Overseas) passports, including a possible pathway to citizenship.

The documents are only available to those born before the former colony’s 1997 handover. Which means younger residents — the vanguard of last year’s protests — must risk asylum instead.

The concept of a Hong Kong asylum seeker is somewhat untested — for decades the city was a place people fled to rather than from. But there is one precedent.

HONG KONG: Protester Crystal has yet to tell her parents she has fled overseas to seek asylum in Canada, one of a growing number of residents choosing self-exile as Beijing tightens control. #BangkokPost #World #asylum https://t.co/Fk7Z3SEBl5— Bangkok Post (@BangkokPostNews) June 5, 2020

Last year, Germany granted sanctuary to two independence activists wanted for their involvement in a violent protest in 2016.

It was the first time a western government decided Hong Kong dissidents were fleeing persecution and the move infuriated Beijing.

Canada has emerged as a favourite destination, aided by a network of activists who have helped people escape Beijing ever since the 1989 Tiananmen crackdown.

“Canada is always a country that welcomes refugees,” said Martin, a member of the New Hong Kong Cultural Club which is currently helping 29 applicants.

“We believe there will be more Hong Kongers seeking asylum in Canada because the Hong Kong situation is falling into chaos.”

Richard Kurland, a veteran Canadian immigration lawyer, said asylum claims would be decided on a case by case basis.

“An ‘over the top’ reaction by either Beijing or the local Hong Kong proxies would strengthen the case for bona fide refugee claims in Canada,” he told AFP.

Asked whether plans for the new security law might constitute such a reaction, he replied: “It will all turn on the details of the new law, and how it is implemented.”

Canada-China ties to be strained if asylum granted

Canada’s asylum cases are decided by an independent tribunal, not the government.

But refugee claims could further strain already frosty ties with Beijing after Canada acted on a US arrest warrant for Meng Wanzhou, a top executive at Chinese tech giant Huawei.

Bonnie Glaser, an expert on China with the Centre for Strategic and International Studies, said cooperation between western nations would make it harder for Beijing to respond.

“If one country acts by itself, it is possible that Beijing will try to impose punishment to deter other countries from doing the same: killing the chicken to scare the monkey,” she said, using a popular Chinese idiom.

Those fleeing abroad face an uncertain future in an unfamiliar land.

Ah Gor, a graphic designer in his early thirties, arrived in Canada after he was charged with rioting, an offence that carries up to 10 years jail.

“Hong Kongers are unable to fully exploit their potential because we are forcibly fused together with the totalitarian Chinese state,” he told AFP, saying he now supports independence, a red line for Beijing.

As someone who studied overseas, language has not been an issue.

But he has struggled with the Canadian winter: “Never in Hong Kong had I experienced temperatures that left my skin in pain.”

Taiwan offers potential sanctuary closer to home, although it comes with caveats. The island has no refugee law so most Hong Kongers must seek business and student visas.

Beijing also views the self-ruled island as its own territory, vowing to one day seize it, by force if necessary.

Last week, President Tsai created a task force to look into how it can better assist Hong Kongers wanting to flee, a move that angered Beijing.

Xiao Hua, a 35-year-old registered nurse, worked as a medic during the early stage of the 2019 protests, has spent the last few months in Taiwan and is considering a full-time move.

“I feel Taiwan is a place where we can still voice our opinions freely,” she told AFP inside a restaurant in Taipei that finds employment for Hong Kongers.

“It will be unbearable, to leave my family, my friends in Hong Kong. But freedom is a very important thing to me.”

Why de-escalation with India is in China’s interest?

The battle for Idlib: A potential Catch-22 for China – James Dorsey

How does Trump aim to contain China?