Indian Media Obsession With Modi & Lies Regarding His State Visits

India media feels it is their utmost duty to praise Prime Minister Narendra Modi on every state visit he takes no matter what he achieves on that tour. Recent Saudi visit is marred with the same things. Pomp & show seems to be Modi's way to go. 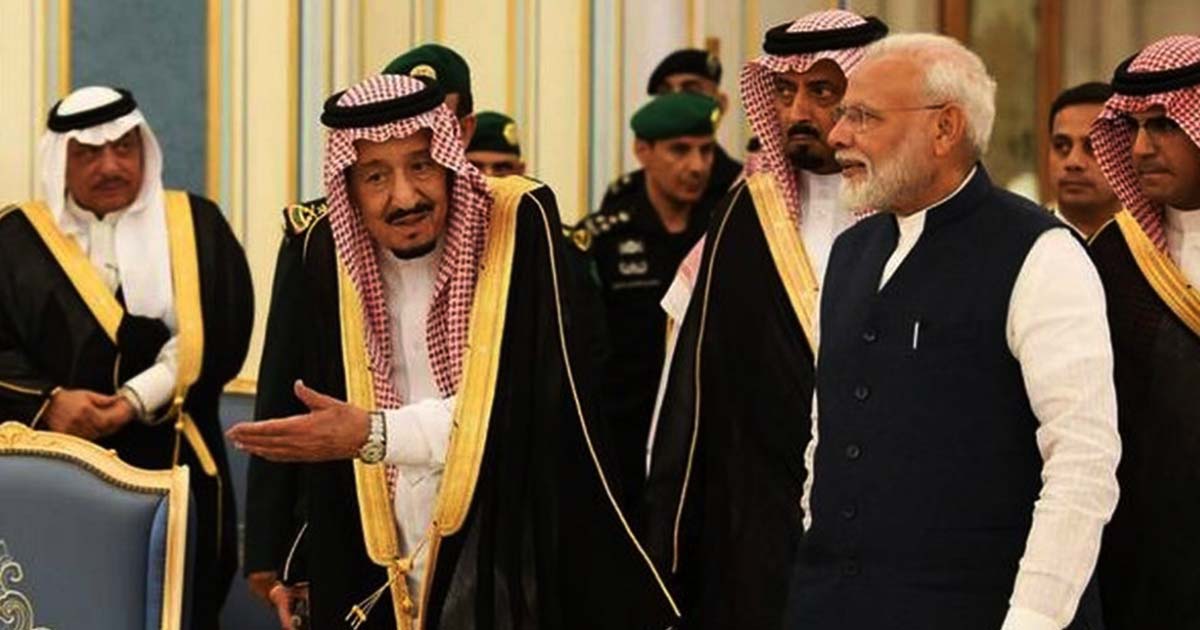 Indian analysts somehow feel they are obliged to praise Prime Minister Narendra Modi whenever he undertakes a visit abroad, no matter the actual outcome of the event. The recent visit to Saudi Arabia was no exception, as analysts fell over each other to write panegyrics.

The fact of the matter is that over the past decade and a half — ever since then Prime Minister Manmohan Singh hosted late King Abdullah in January 2006 on a state visit as the chief guest at the Republic Day ceremonies — India and Saudi Arabia have been like the lovers in the English poet John Keats’ poem Ode on a Grecian Urn: Bold Lover, never, never canst thou kiss, /Though winning near the goal yet, do not grieve; / She cannot fade, though thou hast not thy bliss, / Forever wilt thou love, and she be fair!

The passion is self-evident, but consummation remains elusive. The hype given to Modi’s visit to Saudi Arabia by Indian analysts creates a sense of deja vu.

Gabbard regretted that the US is “hiding the truth” about the Saudi hand in the 9/11 attacks. By holding the Saudi hand, India debunks its own struggle against terrorism

In reality, Modi accepted a Saudi invitation to address an international investment conference in Riyadh and seized the opportunity to give one more push to energize the India-Saudi economic ties.

In February, the Saudi Crown Prince Mohammed bin Salman promised during his visit to Delhi that during the coming two-year period Saudi Arabia would invest $100 billion in the Indian economy. We are nearing half-time.

Nothing is heard anymore about the $44 billion gigantic refinery and petrochemical project originally planned to be set up in Ratnagiri, in which Saudi Aramco was supposedly investing.

Again, Reliance Industries chairman Mukesh Ambani forecast in August that Saudi Aramco would take a 20% stake in his company worth $15 billion. To be sure, one prime objective of PM’s visit to Saudi Arabia was to nudge Saudi Aramco.

In the final analysis, the India-Saudi relationship boils down to two key templates — the 4-million strong Indian expatriate community-based in Saudi Arabia and their remittances which provide hefty budgetary support to the Indian economy and, secondly, India’s huge need to import oil. Of course, these two templates alone make the relationship strategic.

Successive Indian governments have borne this in mind. Remember the Delhi Declaration issued during King Abdullah’s visit to India in 2006? Or, the Riyadh Declaration: A New Era of Strategic Partnership issued during Manmohan Singh’s official visit to Saudi Arabia in 2010? No Indian PM paid such focused attention to the strategic partnership with Saudi Arabia as Manmohan Singh did. King Abdullah was invited to India twice as the chief guest at the Republic Day celebrations.

In substantive terms, Modi government has not brought any additionality into the India-Saudi relationship. The joint statement issued after Modi’s visit last week is largely repeating what similar documents have said in the past.

The Saudis are in the driving seat in navigating the relations with India; they set its compass and calibrate its pace. Perhaps, Modi’s contribution lies in sequestering the relationship from his government’s anti-Muslim policies. But then, the credit also goes to the Saudi regime, which excels in doublespeak on issues of religion and politics.

The Saudis may not feel enthused about India’s investment climate today, and their priority in the near term will be to tackle their own economic malaise

Indeed, green money’s attraction makes Saudi Arabia the Modi government’s cherished partner. If Saudi Aramco can be cajoled into investing $15 billion in Reliance or if the moribund Ratnagiri project takes off, why not?

But excessive hype obfuscates ground realities, which in turn engenders wrong notions. In their eagerness to laud Modi, Indian analysts have arrived at an astonishing conclusion that Riyadh has taken a ‘positive approach’ on the Kashmir issue and has ‘cautioned Pakistan against escalating the crisis’.

Such sweeping judgments, lacking empirical evidence, cannot do good. We simply do not know what has transpired between the Saudi and Pakistani leaderships regarding Kashmir. Evidently, Pakistan does not appear to be unduly perturbed by Modi’s trips to Saudi Arabia.

Equally, India and Saudi Arabia claim to be on the same page as regards international terrorism. But this runs against the international community’s perception of Saudi Arabia. This is what US Congresswoman and Democratic presidential contender Tulsi Gabbard told Fox News on Monday regarding Saudi Arabia’s active promotion of terrorism:

“They’re undermining our national security interests … they are the number one exporter of this Wahhabi extremist ideology. They’re a fertile recruiting ground for terrorists, like al Qaeda and ISIS around the world. They’re directly providing arms and assistance to al Qaeda, in places like Yemen, and in Syria.”

Gabbard regretted that the US is “hiding the truth” about the Saudi hand in the 9/11 attacks. By holding the Saudi hand, India debunks its own struggle against terrorism.

The bottom line is that Saudi Arabia does not sell oil at concessional terms to India. What we expect is assured Saudi supplies. Saudi Arabia is conscious of the medium and long term potential of the Indian market for its oil exports. The challenge today is to transform the buyer-seller relationship to a deeper engagement through investments, industrial collaboration, and other downstream activities. We are for all practical purposes still at ground zero.

No sooner than Modi returned to Delhi, Riyadh formally started its long-anticipated initial public offering of the State-run Saudi Aramco. The firm has no current plans for a foreign share listing. The Saudi expectation is that the sell-off will help the crown prince’s plans to boost economic growth and tackle unemployment which is over 10 percent.

Pricing for the Aramco stock will begin on November 17, a final price will be set on December 4, and trading will commence on December 11. Meanwhile, the plain truth is that Reliance may have to keep its fingers crossed and ‘Ratnagiri’ seems all but moribund.

The Saudis may not feel enthused about India’s investment climate today, and their priority in the near term will be to tackle their own economic malaise.

Terror financing and terrorism: Hafiz Saeed and 12 others booked