In the time of a catastrophe, all the people of a country, irrespective of religion, should unite and work in close coordination in order to defeat the calamity. In the case of coronavirus in Pakistan, the people belonging to religions other than Islam have beautifully realized this reality and are on the frontline in the battle against the coronavirus. This killer disease cannot be defeated alone and collective efforts are required to get rid of this. 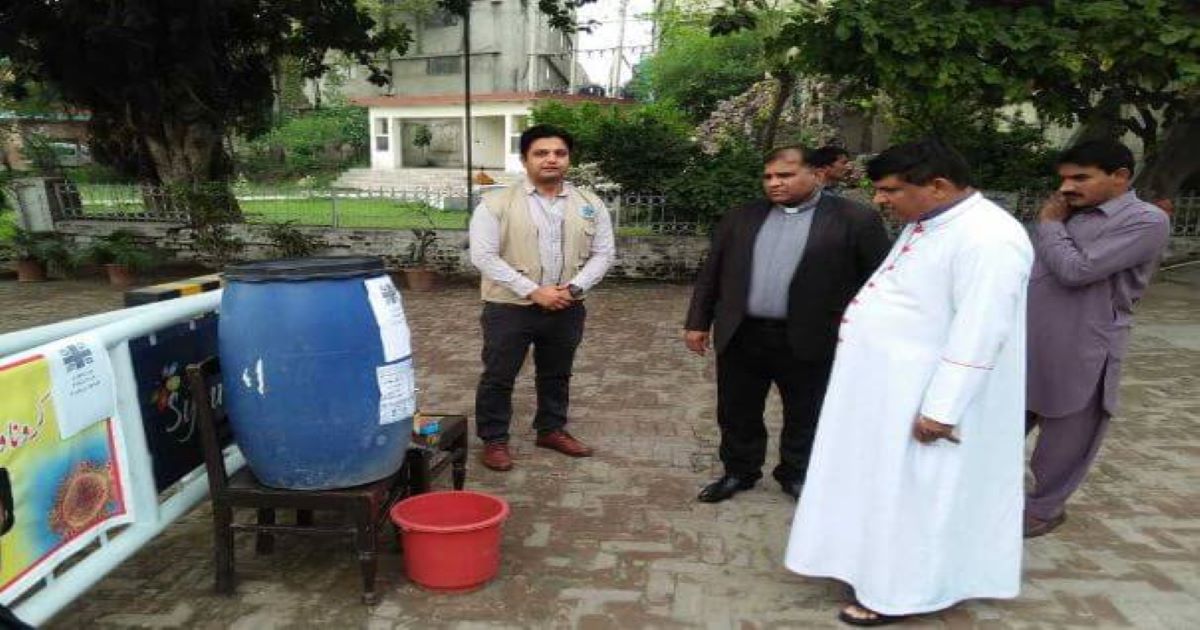 Wearing gloves, and face masks, a group of 15 minority volunteers huddle at a distance with each other, beside a stash of groceries in a large room in the eastern district of Karachi, Pakistan’s commercial capital.

Among them is Sunil Harsi, one of the many Hindu volunteers who have joined hands with different relief agencies to provide rations, and sanitation products to low-income masses amid a raging coronavirus outbreak that has put this South Asian nuclear state under a crippling lockdown.

A grinding economic slowdown, a direct result of the global COVID-19 outbreak, has particularly hit nearly 25% of the over 200 million population of Pakistan, which lives below the poverty line.

The country has reported a total of 58 deaths as the number of coronavirus cases has surpassed 4,070 as of Wednesday.

Harsi, 32, a city councilor for Jamaat-e-Islami, the country’s mainstream religious party, has actively been taking part in relief efforts carried out by the party’s charity wing Al-Khidmat Foundation in Karachi’s eastern district for over a month.

Sunil Harsi, a Hindu volunteer, to @anadoluagency: 'I come here every day at noon to attend this meeting to chalk out the plan for the day. One day we collect and pack relief goods donated by philanthropists and distribute them on the next day'https://t.co/JnzYPJ0tVQ— RiyazulKhaliq (@riyazulkhaliq) April 8, 2020

“I come here every day at noon to attend this meeting to chalk out the plan for the day. One day we collect and pack relief goods donated by philanthropists and distribute them on the next day,” Harsi told Anadolu Agency.

He and his colleagues have been assigned to operate in two slums areas in Gulshan-e-Iqbal town, a middle-income bracket locality.

For distribution of relief goods, they mostly use motorbikes or small vehicles to drive through the narrow streets of the slums.

“We do not gather people on the streets to distribute rations in order to observe social distancing. We deliver rations at the doorsteps,” Harsi said, adding “I was born and raised in this area. Who’s needy and who’s not, I know very well”.

Adnan Sadiq, a young Christian volunteer, who too is part of the group, counts his involvement in the operation as a pride.

“I am proud to be part of this [relief campaign]. In this way, I am contributing something to the society, and my own community as well,” Sadiq, 22, who joined the relief activities two weeks ago, told Anadolu Agency.

He gave credit to his Muslim friends for bringing him in.

“I feel myself proud as I am not the one seeking help but I am helping others. It’s all because of my Muslim friends whose selfless efforts for the needy masses inspired me to join them,” he said.

Around a dozen Christian and Hindu volunteers from his area, he said, were working with different charities.

Seema Maheshwari, a human rights activist who too has been engaged in rations distribution among needy people in different parts of Karachi, thanked the Muslim community for assisting her efforts.

“I started my efforts in collaboration with my family and some friends with limited resources. But soon, my Muslim friends and philanthropists joined hands with us,” Maheshwari, a Hindu by religion, told Anadolu Agency.

“I am really thankful to my Muslim brothers and sisters who have trusted my efforts, and provided us rations, and other essential goods for the poor masses,” she went on to say, adding several other Muslim philanthropists have assured her of their support.

So far, Maheshwari has distributed rations among 250 families in different parts of the city.

“We are distributing rations among needy Hindus, Christians, and even Muslims. It’s not about religion, race or community. It’s all about humanity,” she maintained.

The country’s tiny Sikh community is also contributing its share to provide relief to the low-income people, who have been badly hit by the economic meltdown, a direct result of the coronavirus outbreak.

Pakistan Sikh Gurdwara Parbandhak Committee, an organization that deals with religious affairs of the Sikh community in Pakistan, has already allotted portions at scores of gurdwaras — worship places — as isolation cells for suspected coronavirus patients.

In addition, according to Charanjeet Singh, a community leader, rations and cooked food were being distributed among needy people irrespective of their religious affiliation, in the gurdwaras in Karachi, Peshawar, Nanakana Sahib — the birthplace of of Baba Guru Nanak, the founder of their religion — and other districts.

Read more: Why we Pakistanis are proud of things that are not true?!

Haris and Sadiq also act as a link between their foundation and the respective communities.

“I have also been appointed in-charge of rations distribution [by Al-Khidmat Foundation] among needy Hindus as I know my community more than anyone else,” Harsi said.

“I have personally handed over rations to around 150 Hindu families at their doorsteps in my locality,” he added.

Similarly, Sadiq has been assigned to collect the data and deliver rations to the needy Christian families in his area of operation.

Hindus and Christians make up 4% and 3% of the total population of Muslim-majority Pakistan, respectively, whereas, the number of Sikhs in Pakistan is estimated between 30,000-40,000.

How to Structure an Essay: A Guide for Beginners

Titanic is eroding away, and will soon be unrecognizable