Is Mehmood Khan’s nomination as CM a first sign of Imran’s compromise? 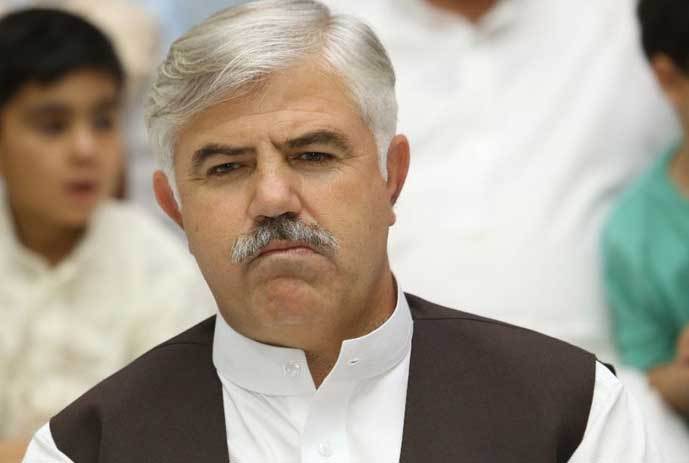 Swat’s Mehmood Khan has a diverse ministerial portfolio, having served as  Provincial Minister for agriculture [from 2013 to 2015], sports, culture, and tourism and as the Minister for home and tribal affairs in Khattak’s cabinet. He held the position of Union Council Nazim Kheri prior to his election as MP on PTI ticket in 2013 General Elections.

Imran’s decision to allow a CM to prove himself in the next 6-months may push the nominated CM to eclipse the efforts of PTI’s last era in KP, to consolidate party’s grip on the province based on performance

Mehmood is credited for doing wonders for the party in the region, as the PTI President of Malakand Division. In July 25th elections, he secured 25,630 votes against the ANP’s Ayub Khan’s 11,399 votes from PK-09 in Swat.

In 2014, Mehmood Khan faced charges of misusing the discretionary funds, however, was later cleared of the alleged corruption. During the investigation, he had confessed that he had mistakenly transferred Rs1.8 million from his discretionary fund as Minister to his personal account. He blamed the lack of understanding of the system for this fiasco.

Read more: Has PTI achieved its political goals in KPK?

The CM post of KP has remained under the spotlight after PTI’s landslide victory in KP. PTI managed to obtain a majority in the KP with 65 seats out of the 99 General Assembly seats. After PTI’s impressive victory in KP, a number of candidates emerged for the position of CM including former CM KP, Pervez Khattak, former Education Minister, Atif Khan and former Speaker KP assembly, Asad Qaiser.

However, Imran had indicated that he would opt for a candidate of clean repute purely based on merit. Despite, Imran’s clear-cut stance on the matter, Pervez Khattak believed that he would continue as CM in the upcoming PTI tenure. But, Imran had some other ideas, and there was a lot of speculation that hard-working Atif Khan would be announced as the next CM.

Mehmood Khan was not the part of any grouping within PTI ranks in the province, which favored him as a neutral candidate

Media pundits and commentators emphasized Pervez Khattak’s anguish over Imran’s decision to give a chance to some other leader. Former CM put the rumors of the forward block to rest and showed his absolute trust in the decision of Party Chief.

Khan was looking for a young man to lead the province, following his announcement in Punjab during the meeting of the newly-elected PTI members of the Punjab Assembly, which lead most to believe, that much-lauded, Atif Khan will be his ultimate choice.

Read more: njured Pervez Khattak fights from his sick bed to clear his…

Since Imran wanted a guy with not a single corruption-related charge against him, the decision to install Mehmood seems to be a compromised one. Because it is apparent that Imran decided in favor of Mehmood in the face of strong opposition of Khattak-who did not favor Atif Khan as CM. Besides, Mehmood Khan was not the part of any grouping within PTI ranks in the province, which favored him as a neutral candidate.

Nevertheless, Khan has shown the first sign of weakness by overlooking his favorite and much-lauded Atif Khan for Mehmood Khan, under pressure from Khattak and his group in KP. GVS spoke to sources in Swat, who spoke highly of him and said he was a nice gentleman and an ideal choice for the position. Mehmood is a relatively experienced politician, as he held a portfolio of Ministries in PTI’s last tenure.

He is also considered close to Pervez Khattak and PTI’s emphatic win in KP was a testimony to Khattak’s work in the province. Since, Mehmood played a part in PTI’s outstanding performance in Malakand Division, and rose from grassroots to make a name for himself, he deserves a chance to lead the province.

But, it puts a big question mark on Khan’s decision-making credential and shows that Khan can be exploited under pressure. This development makes the decision to nominate CM Punjab even more interesting. Prior to Mehmood’s decision, Khan was taking steps in the right direction. Will Khan be threatened in Punjab, and how he deals with the IMF and immediate issues in foreign policy, will come under intense scrutiny. And, it will reveal a lot about Khan’s ability to take on challenges.

Imran’s decision to allow a CM to prove himself in the next 6-months may push the nominated CM to eclipse the efforts of PTI’s last era in KP, to consolidate party’s grip on the province based on performance. If he does not take the chance, Atif Khan will be a favorite to take over as he will remain in the business, if he continues his good work as education minister or any other portfolio.