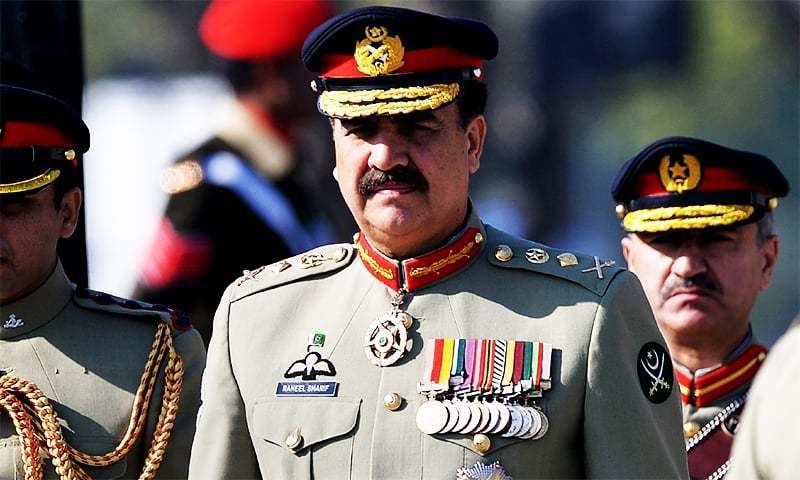 Past three months speculation has been rife in the media about General Reheel Sharif going to Saudi Arabia as head of the Islamic ‘NATO’. Is he going or is he not, has been in the air. Yesterday, the Defense Minister, Khawaja Asif, confirmed that the government has given approval for him to lead the coalition to a written request from the Saudi government.

Khawaja Asif, himself, first gave the news on January 6 that the Saudi Arabian government had offered Gen (retd) Raheel Sharif to lead the 39 nation Islamic coalition of forces that had been set up in April 2015. However, at the time he was not clear whether, Gen Raheel Sharif as Pakistan’s ex-army chief, had applied for the required No Objection Certificate to take any such job.

Is this job being taken by Raheel Sharif as an individual or is it under the aegis of the government of Pakistan?

The minister termed it only a matter of time before the former army chief leaves for Saudi Arabia to ‘put a structure’ in place for the alliance. “There isn’t any structure [of the alliance] as yet and General Raheel will adopt a framework after arriving in the country.” However, he said the former COAS had also asked the government for permission, Asif replied, “[It was not needed after] the two countries have had an agreement.”

Read More: Pakistan has approved Gen. Raheel’s new job: Are we digging a hole for ourselves?

This announcement has already received a strong condemnation reaction from other major political parties, PPP and the PTI. PTI spokesperson, Fawad Chaudhury, said they would be raising it in Parliament. He tweeted,

He said that three PTI parliamentarians, Shah Mahmood Qureshi, Shireen Mazari, and Shafqat Mehmood would be working on a strategy to dissuade the government from such a move and would present parliament with a calling attention notice to start a discussion on the issue.

Pakistan cannot afford to enter into any intra-Muslim states’ power games, esp those with sectarian overtones.

She said the government was undermining parliament’s resolution on Yemen by allowing Gen (retd) Raheel to head the Saudi alliance. “Parliament doesn’t want Pakistan getting even remotely involved in any conflict that has or could have sectarian undertones,” she added.

There is no question of the strong ties – business, political and personal ties – that the PML-N government leaders have with Saudi Arabia, they spent ten years in the kingdom, after the 1999 Coup by Pervaiz Musharraf. But in addition, two years back, when petrol prices were over $120 and Pakistan was in financial problems, in February 2014, Saudi Arabia “gifted” Pakistan 1.5 billion dollars to help with developmental projects in various sectors. The recent decision taken by Pakistan government does raise questions, whether the time has come to payback for that “unconditional gift”.

Now we know the reason fr the “gift” of 1.5 billion $ given by Saudi Arabia…time fr repayment by fighting their war on victimized Yemen..

The PML-N government is keen to improve the strained relations with the kingdom, after the strong public snub the parliament gave to their request to send Pakistani forces to help them in Yemen. Strong words were uttered at the time by their UAE allies as well against Pakistan. In April 2015, UAE’s Minister of State for Foreign Affairs Dr Anwar Mohammed Gargash said, Pakistan of having to pay a “heavy price” for taking on what he called an “ambiguous stand”. Furthermore, last year after the URI attack on India, the UAE made an unprecedented statement in which it issued a statement saying “UAE’s solidarity with India and support to all actions it may take to confront and eradicate terrorism.”

The subsequent last two years have seen relations wane between the middle eastern countries and Pakistan. Last year, Indian PM Modi received an exuberant welcome in the UAE where he signed deals worth billions of dollars. This year the UAE forces were present on India’s Republic Day celebrations and the Burj Khalifa was lighted in Indian flag colors on the 26th of January to commemorate the day. Stressed relations with Pakistan are also being reflected in tense diaspora relations; with Pakistani laborers being sent back to Pakistan and increasingly deported on trivial issues.

Support for the decision has come from conservative quarters who have welcomed Pakistan playing a stronger role in the middle east and in Islamic nations. Ansar Abbassi, the reknowned writer for the News International tweeted,

Gen (R) Raheel Sharif’s joining Islamic military alliance as its chief is in the interest of Pakistan as well as the Islamic world.

Zaid Hamid, Pakistan’s defense analyst condemned the stance taken by PTI and has tweeted that this is a bigger game changer for Pakistan than CPEC. He maybe right, but maybe a game change taking the country in a different direction.

He also expressed fears that India would join in the Islamic coalition if we did not take leadership and went onto say that India was expanding its footprint in the region.

Every country, including India is spreading its military footprint in the region except Pak. #RaheelSharif leading MPKF is OUR opportunity..

For Pakistan, the issue is twofold. First, it does not wish to be seen taking sides against any country in middle eastern conflicts – especially those where it may be seen to involve a Shia-Sunni dimension. Iran is its important neighbor and Saudi Arabia is a friendly ally. For Pakistan, both of these countries are important.

To belie concerns by the political parties it is important that the government shares what the Saudi’s have informed them with.

Second, Pakistan cannot afford to exacerbate any sectarian issues internally and as a result, tries to balance such relationships delicately. The Pakistani government did join the 34 Islamic nation military alliance, in 2015, however, this received opprobrium from the parliament.

In April 2015, after a week-long substantial discussion in the parliament, a resolution had unanimously passed that urged the government to stay neutral in the military campaign against Yemen.

It has been reported that Sartaj Aziz, Advisor to PM on Foreign Affairs, went in February to Iran to discuss the Pakistani government’s decision on allowing General Raheel Sharif to lead the Islamic coalition. So far there is no indication that Iran views this alliance in any terms except to be viewed as a vehicle to ‘kill Yemenis’.

Concerns over General Raheel Sharif accepting this post remain as Pakistanis are unconvinced that the alliance will be used only to fight terrorism concerns and not be used to further sectarian causes supported by Saudi Arabia in Yemen or Syria.

Pakistan cannot afford to exacerbate any sectarian issues internally and as a result tries to balance such relationships delicately.

To belie concerns by the political parties it is important that the government shares what the Saudi’s have informed them with. The reasons which have given them enough reassurances that this will be a broad-based coalition which includes Shia majority countries or at least will not be used against them.

Furthermore, is this job being taken by Raheel Sharif as an individual – in which case why has he not applied for the NOC – or is it under the aegis of the government of Pakistan, as it currently appears from the defense minister’s statement?

Gen Raheel Sharif, being given assurances by anyone that he will be given a free hand to do what he likes, means very little, when the bucks that will pay for the alliances expenses come from Saudi Arabia.

Previous articleIndia & Pakistan: Narratives of the ‘Evil Neighbor’ a threat to peace
Next articleWould Einstein be considered ‘Einstein’ today?

25 September 2021
Previous articleIndia & Pakistan: Narratives of the ‘Evil Neighbor’ a threat to peace
Next articleWould Einstein be considered ‘Einstein’ today?

US not interested in creation of Palestinian state, seeks economic reforms

Can the depreciating rupee rescue the government in the next polls?