Syrian forces have launched one of the key offensive against rebels. But the offensive has displaced atleast 300,000 people - another humanitarian crisis in Syria. 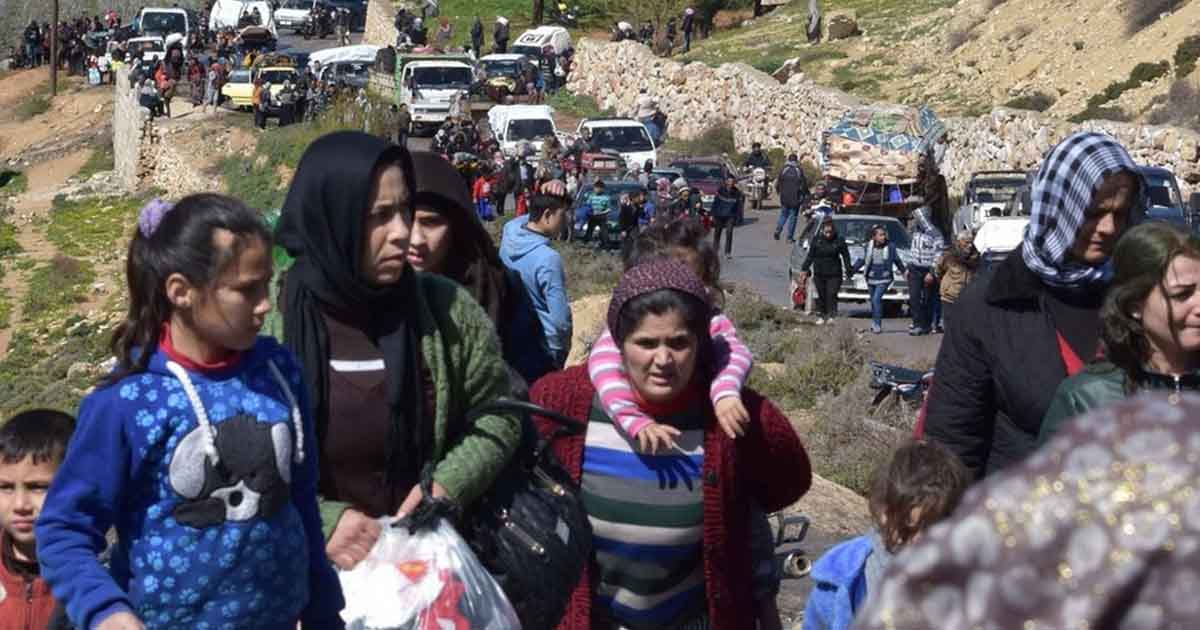 Around 900,000 people have been forced from their homes and shelters in less than three months, leaving huge numbers to sleep rough in the bitter cold.

The United Nations said that half a million among them were children, some of whom have died of exposure in snow-covered camps.

It warned that the crisis could worsen unless a ceasefire is reached. “Over the past four days alone, some 43,000 newly displaced people have fled western Aleppo where fighting has been particularly fierce,” UN spokesman David Swanson told AFP.

#HumanRights_06
Russian-Syrian operations in Idlib have reached a defining moment — control of the M5 highway while Turkey threatens a severe offense. It aims to expand its offensive unless the Syrian forces retreat. Erdogan also signals that airstrikes…https://t.co/lWufsA0i9m

A staggering 300,000 people have been displaced since the beginning of February alone, he said. The wave of displacement is the biggest in nearly nine years of civil war, which has forced half of Syria’s population to flee their homes.

“The violence in northwest Syria is indiscriminate. Health facilities, schools, residential areas, mosques and markets have been hit,” the UN head of humanitarian affairs and emergency relief, Mark Lowcock, said on Monday.

“The biggest humanitarian horror story of the 21st Century will only be avoided if Security Council members, and those with influence, overcome individual interests and put a collective stake in humanity first,” Lowcock added.

Russia, the main foreign broker in Syria, has repeatedly vetoed Security Council resolutions on the conflict. “The only option is a ceasefire,” Lowcock said.

More than 400 civilians have been killed since mid-December, according to the Syrian Observatory for Human Rights, with violence on Tuesday leaving at least another two dead.

Save The Children said seven children, including a baby only seven months old, have died in freezing temperatures and dire conditions in the camps.

“Those families who could take some of their belongings as they fled from their homes are reportedly burning whatever they could find, including pieces of furniture and whatever can be spared to stay warm for a short while,” it said.

Regime and Russian forces have repeatedly been accused of targeting hospitals and clinics.

The head of the World Health Organization said Tuesday that out of nearly 550 such facilities in northwest Syria, only about half were operational.

“Hundreds have been killed since the offensive began, while eyewitness reports suggest the regime and its allies have indiscriminately targeted schools, health facilities and mosques in a “scorched earth” advance …”. ⁦@ishaantharoor⁩ #Syria https://t.co/YTxkxl7DHe

“We repeat: health facilities and health workers are not a legitimate target,” Tedros Adhanom Ghebreyesus told journalists in Geneva.

The UN High Commissioner for Human Rights Michelle Bachelet called for humanitarian corridors to be set up for fleeing civilians.

But there has been no sign of any let-up in the violence. Syrian troops and allied forces backed by Russia have stepped up their offensive against jihadists and their rebel allies in Idlib and the neighbouring province of Aleppo.

They have reconquered swathes of Idlib as well as key areas that have secured the strategic M5 highway connecting the country’s four largest cities as well as the entire surroundings of Aleppo city for the first time since 2012.

According to Observatory, government forces made new gains in western Aleppo province on Tuesday and are pushing towards the Sheikh Barakat mountain.

Read more: M5 – A Vital Route Secured, Is it time for Peace in Syria?

That would give them a vantage point over swathes of Idlib and Aleppo provinces, including sprawling camps housing tens of thousands of displaced people.

“The battle for the liberation of the provinces of Aleppo and Idlib continues, regardless of all the hot air coming out of the north,” Assad said, referring to Turkey.

Turkey and Russia were again locked in talks in Moscow on Tuesday after an earlier round of discussions in Ankara last week failed to produce an agreement on a solution to the worsening violence.

“For the moment, no satisfying result has obtained from the negotiations,” Ibrahim Kalin, spokesman for Erdogan, told reporters in Ankara.

Turkey, which already hosts more Syrian refugees than any other country — more than 3.5 million people — is unwilling to open its borders to a new wave.

Previous articleWho has the jurisdiction to decide on Justice Qazi Faez Isa’s misconduct?
Next articleIs Israeli PM Netanyahu Going to Be Convicted?

25 September 2021
Previous articleWho has the jurisdiction to decide on Justice Qazi Faez Isa’s misconduct?
Next articleIs Israeli PM Netanyahu Going to Be Convicted?

Smoking: a rundown on lighting up