After New Delhi decided to take down the Kashmiri flag, which was supposed to be removed on 31st October when the bifurcation legally comes into effect, the Naga separatists are now demanding their own separate flag and constitution. 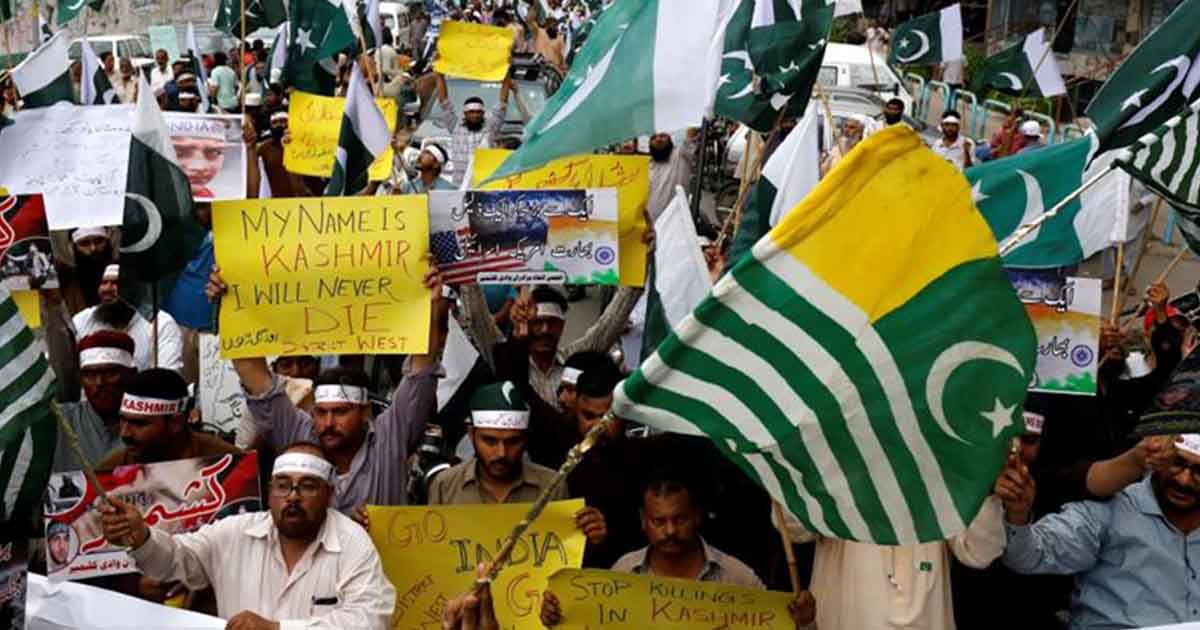 A day after New Delhi decided to take down the flag symbolic of occupied Jammu and Kashmir’s special constitutional status from the Secretariat building in Srinagar, Indian media reports on Sunday stated that the Naga separatists holding peace dialogue with the Modi administration are now demanding a separate flag and a separate statute book.

The Hindu reported that a month after the abolishment of Article 370 from the Indian Constitution, which prohibited Indians from buying property in occupied Kashmir amongst other privileges, a Naga separatist group has, for the first time, demanded a “separate flag and constitution”, and deemed it necessary for an “honorable solution” to the Naga peace process that is ongoing for the past 22 years.

“The Isak-Muivah faction of the National Socialist Council of Nagaland (NSCN-IM) has in a letter to Prime Minister Narendra Modi said any solution to the Naga political issue would be far from honourable if the core issues such as Naga flag and Constitution are yet to be agreed upon between the group and the Centre,” reported the Hindu.

Congress leader Rahul Gandhi, who was accompanied by leaders from 8 Indian opposition parties and media personnel, was denied entry into Srinagar and forced to return to New Delhi.

The National Socialist Council of Nagaland-Isak-Muivah (NSCN-IM), in a letter penned to the Indian Prime Minister Narendra Modi, stated, “This is in reference to the core issues like Naga flag and Constitution, which are yet to be agreed upon between the two parties. Without these two core issues solved, any solution would be far from honourable because Naga pride and identity is deeply entrenched here.”

In Indian-occupied Kashmir, the Modi administration has taken down the flag symbolic of the special constitutional status of the disputed valley. Indian media reported that the flag was originally supposed to be removed on 31st October, when the law bifurcating Ladakh and Jammu & Kashmir into two union territories would legally come into effect.

A report by The Hindu read, “The J&K administration stopped hoisting of the region’s separate flag, the white plough on red background, in summer capital Srinagar’s Civil Secretariat on Sunday, evoking emotional reactions from the onlookers, local parties and local officers.”

Sources reveal that both flags, the Indian and the Kashmiri flag, were lowered at sunset on Saturday, however, on Sunday morning, the staff at the Srinagar Secretariat only raised India’s tricolor flag. This move has come after 20 days of the abolishment of Kashmir’s special constitutional status, marking an end to the symbolism of the separate identity that was adopted by the first Constituent Assembly of Jammu & Kashmir in 1953.

Speaking to The Hindu, a vendor based near the Secretariat in occupied Srinagar described the removal of the Kashmiri flag as “an open provocation”. He went on to say, “Hundreds of locals since 1947 offered sacrifices, in lives and material, to see the flag high and flying. Betrayal after betrayal saw the last remnant of J&K’s special status down, never to rise again. It is heart-wrenching.”

The people of Pakistan and their leaders in particular, and the Muslim Ummah in general, must come forward at this crucial juncture to help the besieged people of Kashmir.

Tweeting from his account, Rahul Gandhi shared is ordeal, “It’s been 20 days since the people of Jammu & Kashmir had their freedom & civil liberties curtailed. Leaders of the Opposition & the Press got a taste of the draconian administration & brute force unleashed on the people of J&K when we tried to visit Srinagar yesterday.”

It's been 20 days since the people of Jammu & Kashmir had their freedom & civil liberties curtailed. Leaders of the Opposition & the Press got a taste of the draconian administration & brute force unleashed on the people of J&K when we tried to visit Srinagar yesterday. pic.twitter.com/PLwakJM5W5

AFP reported that in the first official statement released by a faction of the Hurriyat Conference since the Modi administration scraped of Kashmir’s special status, the Hurriyat leadership has urged the Kashmiris to resist Indian aggression and this move to dismantle Kashmir’s identity.

Speaking to Kashmir Media Service, Syed Ali Gillani, Chairman of the All Parties Hurriyat Conference, has challenged India that even if the entire Indian army is deployed in Kashmir, the people will still not abandon their freedom struggle.

Gillani said, “India should know that even if they bring their entire armed forces into occupied Jammu and Kashmir, even then the people of Jammu and Kashmir will not abandon struggle for their rights and liberation.”

The senior Hurriyat leader continued, “We must fight the enemy in unison. History is a witness to the fact that big military powers have repeatedly perished in front of the force of peoples’ unity and truth. Courage, patience, and discipline are those weapons of a defenseless people which can defeat the enemy with howsoever enormous an arsenal.”

In a letter dispatched the publication, Syed Ali Gillani has directed Kashmiris to resist Indian tyranny by organizing peaceful protests and demonstrations, and remaining “absolutely disciplined not give the enemy, who is armed and ready to kill, any excuse whatsoever to hurt our lives and property.” Gillani urged Kashmiris living outside the occupied Himalayan region to act as “ambassadors of Kashmiri people all over the world.”

He said, “They should use their knowledge of Kashmir’s history and their own lived experiences to highlight the oppression and brutalities of the Indian State. They should also connect with other marginalized and struggling nationalities in other parts of the world and forge solidarities of resistance.”

He continued, “Today, if you once again get ensconced in so-called pragmatism and fail to act decisively, then neither history will forgive you nor will your coming generations. You must continue to heighten your political and diplomatic initiatives to the highest level and respond to the deceit of the Indian occupation with full strength and determination.”

Hold meeting in Srinagar if ‘all is well’: Qureshi challenges Modi