List of Cheapest Cars: Cars Available Under 2 Lac in Pakistan

With the advent of new modern and expensive cars in Pakistan, older cheaper ones faded away to the background. But not everybody can afford a new shiny ride. This list includes the options if you don't want to spend too much on buying a ride.

The slump in Pakistan’s auto industry has made it difficult for auto companies to function at their fullest. Even a $600 Million investment by a Chinese company, Timesaco, to improve the transport sector could not breathe life back into Pakistan’s dying industry. Higher taxes coupled with ever-rising Dollar rates resulted in the lowest ever car sales number in Pakistan which tempted many automakers to move their business of Pakistan.

And the cycle continued!

Pakistan consists of 82 million middle-class families, a number projected to grow to 122 million by 2025 who cannot afford to buy a new model coming out every other day. But the need for transport is ever-increasing and with it the necessities. This graph would probably better explain the sale ratio of small-engine cars in Pakistan. 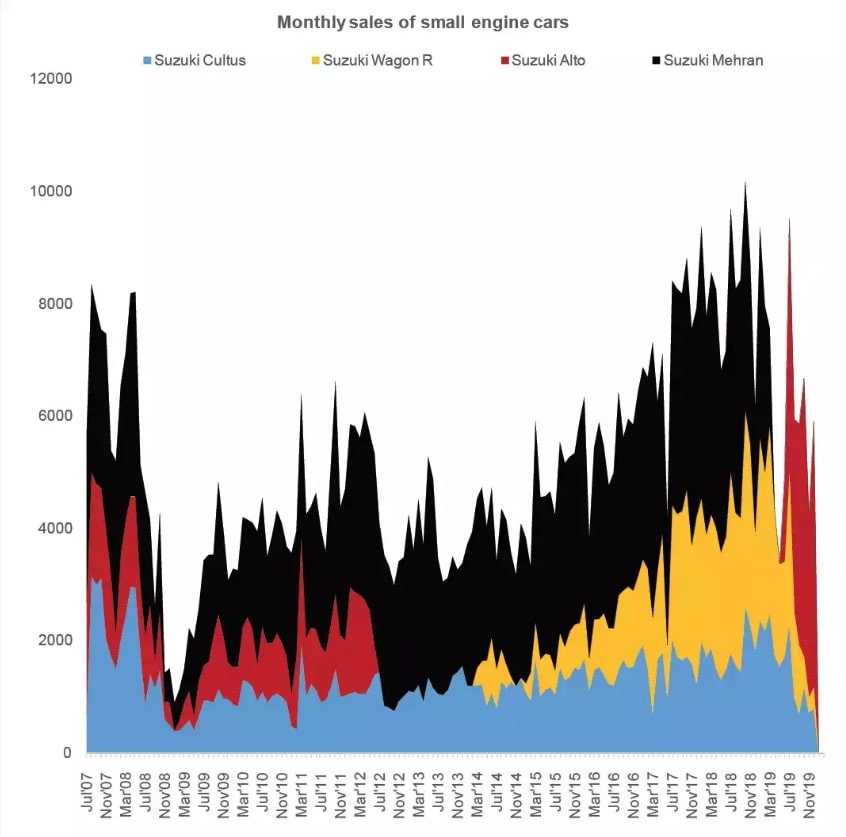 Here, comes in the cheaper models of cars that you can buy for under 2 lac. They might not tempt you but then, if you are reading this, you probably were not looking to buy a Lamborghini anyways.

The manufacturing of Suzuki FX was discontinued several years ago due to the advent of Suzuki Mehran, but it is still much active in the resale market. It offers the 800 cc engine the same to one that later came in Suzuki Mehran. The car produces an 8-10 kmpl mileage with a petrol engine.

Along with the low price, it is reliable to use and its compact size ensures that you can easily move in the city. It does not possess fancy features like power steering and power windows. However, due to the cheap Suzuki FX price in Pakistan, it is one of the bare-minimum cars you can purchase within Rs 2 lakhs from the market.

Suzuki FX is among the most used car in Pakistan due to the availability of cheap spare parts. This is considered a great economical “Family Car”.

If you love a car with a big trunk and spacious interior, look no further than Suzuki Khyber, the best choice in this price range. The car is also regarded as the elder sibling of Suzuki Mehran. It has a larger engine and offers more space and legroom to the rear passengers. In addition, it has a 1000cc petrol engine and offers a manual transmission. Due to the low Suzuki Khyber price in Pakistan, you can easily purchase the late 1990s or the earlier model within Rs 2 lakhs.

It is noted that Suzuki Khyber was the popular hatchback in the years of its manufacturing. However, its resale market is still present due to the low maintenance and operational costs. Spare parts can be easily found from the market.

Suzuki Mehran, a name known to every soul in Pakistan. The most famous, most used car in Pakistan. Unfortunately, a few months back, the company stopped its production and introduced Suzuki Alto 2019 as its variant. However, due to the budget-friendly Suzuki Mehran price in Pakistan, the car’s popularity did not fade away. It has low maintenance costs spare parts can be easily purchased from the large network of 3S dealerships in Pakistan.

In under Rs 2 lakhs, you can simply buy its late 1990s or earlier model. It is noted that Suzuki Mehran possesses the 800cc petrol engine and offers great fuel economy. However, the disadvantage is the non-availability of airbags, power windows, power steering, and power mirrors.

An older version of Suzuki Mehran will cost you around 2 lac Rupees.

News Desk - 20 October 2021
Zameen.com has broadened its horizons with the laying of the foundation stone of the Edge Mall in Faisalabad. Faisalabad’s property market is essential to the country’s real estate industry.

Alarm for US: North Korea tests NEW type of missile

3 dead in protests against ‘desecration’ of Quran in Bangladesh

Tesla under scrutiny amid safety concerns over assisted driving features