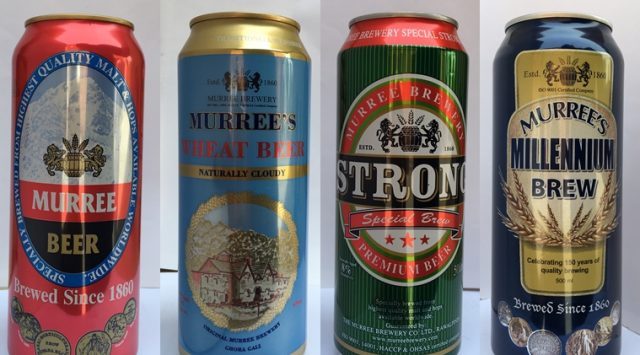 Water is life as the old saying goes. And Man has brought flavor to life in many ways and has not hesitated to bring such changes in the water he drinks himself. History is abundant in the varieties of juices and beverages different civilizations have created over the past. The beverage industry (also known as the drink industry) produces drinks, in particular, ready to drink products.

Drink production can vary greatly depending on the product being made. Pakistan too is not behind in this industry. While it has an abundance of overseas beverage companies operating in its territory, it also has many local beverage companies. Perhaps no other is more famous than Murree Brewery itself.

Murree Brewery Company Limited (MUREB) was established in 1860 and incorporated a year later and is based in Rawalpindi. This has made it the oldest firm in Pakistan. The British – who had established the brewery to meet the beer requirements of British personnel (mainly army). Later on, they sold its majority shares to the renowned Bhandara family. Now, the third generation is running the firm, and the brewery is listed on the PSX.

It manufactures and sells alcoholic and non-alcoholic products in Pakistan. The Company has taken many steps of modernization. In 1990 new beer canning and new bottle filling facility from Holstein and Kappert (Germany) was installed. Two units of alcohol rectification columns for producing another neutral grade of potable alcohol from Molasses were procured from France and Italy.

Read more: Murree Brewery plays its part in solving the water crisis in…

The company has three divisions, liquor, glass, and Tops division that make juices, etc, amongst which liquor is the most profit making division. Tops Food and Beverages, a division of the Company, was established in 1969. It processes fruits and markets fruit juices and allied food products. Tops Food Rawalpindi unit is producing Tetra Pak juices and is well equipped with state of the art Tetra Brick Aseptic machines. Tops Hattar plant is producing juice, drinks, Jams, Vinegar, Ketchup, squashes. Both plants are Halal, ISO9001, HACCP and ISO 22000 certified from world’s renowned certification bodies.

Murree Glass, the glass container division of the company, established in 1974, manufactures glass containers of all types for the company and other food and beverage producers. It has recently begun operation of new Furnace complete with 03 Feeders. The new project consisting state of the art machinery / refractory imported from EU countries has increased manifold the Division’s productivity and profitability making optimum use of most modern Italian Electronic I.S. Machines. It is also located in Hattar (KPK)”.
Murree Sparkletts (2011): Water Division.

Darakhshan is a Project of Association for Special Persons. It was established in 1961 in Rawalpindi for providing skills training to special persons of the society in multiple fields of life.

Tops Food and Beverages division was established in 1969. Two manufacturing units are located in Rawalpindi and Hattar (KPK) respectively. A Tetra Pak packaging facility was added in 2001. The Hattar plant was installed in 1992.

Murree brewery has not stopped at the above two. Recently, a new state of the art beverage plant was inaugurated on 11th January at 11 am in the historic Murree Brewery Company. The inauguration was done by Deputy Chairman Senate, Saleem Mandviwalla. He stated on the occasion of the inauguration that Murree Brewery has been a model of success for over a century, and their continued growth has been a contributing factor to the development of the nation’s economy and economic wellbeing.

The Chief Executive Officer of Group Isphanyar Bhandara, prominent industrialists, dignitaries and senior officials of Murree Brewery were present on the occasion.
Saleem Mandviwalla appreciated the spirit of Isphanyar Bhandara for huge investment and also acknowledged the contribution of Murree Brewery Group in the industrial sector which had provided business and job opportunities. He said it was the need of the hour that they should promote economic and trade activities to overcome poverty and backwardness.

Murree Brewery, however, has not stopped at mere production it also has played a part in working for the national cause. Murree Brewery was running an excellent school which was snatched away from us as a part of Bhutto’s policy of nationalization. But even now, we assist that school in repair and maintenance. Bhandara Foundation, based in Lahore is actively involved in various charitable activities may be described as a philanthropic arm of Murree Brewery. Many prominent people like Justice ® Nasira Iqbal are associated with Bhandara Foundation which regularly assists various charities and hospitals and other humanitarian organizations.

In the end, Murree Brewery can rightly be called a historical asset for the nation. A company, that predates the country, has been enriching the lives of the common people and providing livelihood opportunities for many.

Darakhshan is a Project of Association for Special Persons. It was established in 1961 in Rawalpindi for providing skills training to special persons of the society in multiple fields of life. Murree Brewery is helping Darakhshan by providing free building, electricity, security and other essential necessities to keep serving these special people. So far hundreds of students have successfully learned and are now generating income to upgrade their lives.

A get together lunch was held at the residence of Chief Executive Murree Brewery Company, Mr. Isphanyar Bhandara on the first of December. The purpose of this lunch was to bring together the various religious minorities of Pakistan and to promote harmony and close ties amongst them. The ceremony was attended by many dignitaries and representatives of every minority group of Pakistan who thanked Mr. Isphanyar Bhandara for taking this initiative as it is the need of the hour to promote interfaith harmony in Pakistan during these difficult times.

Mr. Isphanyar Bhandara also thanked everyone who attended the ceremony for showing their support for this event and he hoped that get together like this would help to cement stronger ties amongst communities across Pakistan.

In the end, Murree Brewery can rightly be called a historical asset for the nation. A company, that predates the country, has been enriching the lives of the common people and providing livelihood opportunities for many. It can also be used to promote a soft image of Pakistan and help set up a niche market segment abroad.

OGRA ordinance to be amended by govt