There is a growing perception among legal experts that the LHC in its detailed ordered attempted to correct the Supreme Court. Can a high court pass an order to correct the apex court? 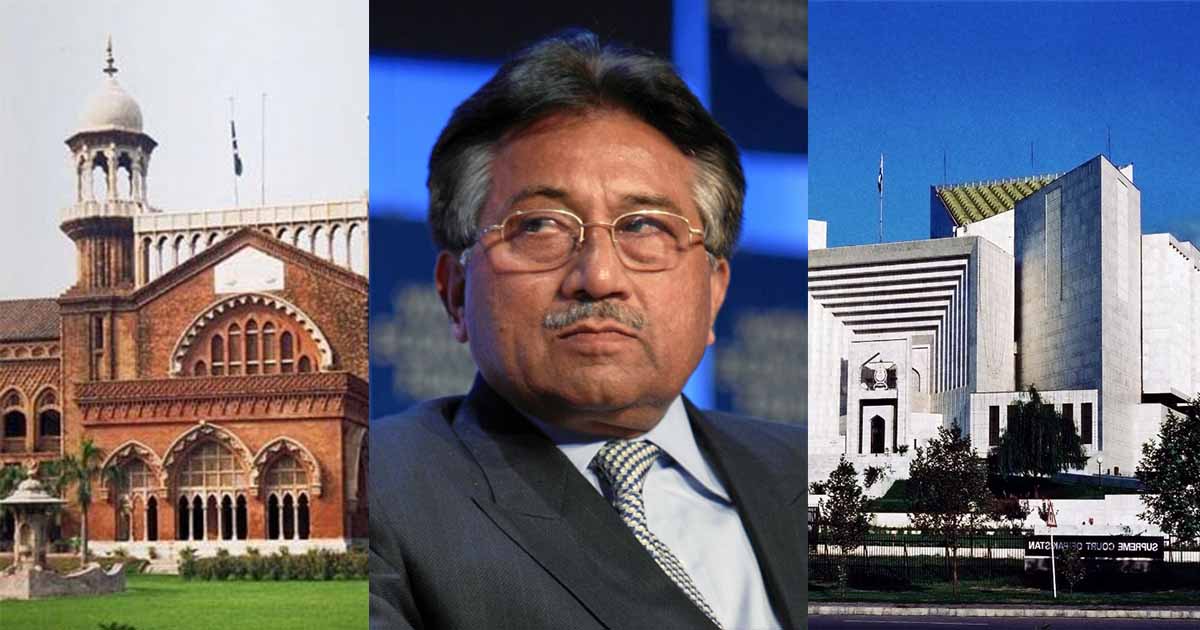 The Lahore High Court (LHC) on Monday issued a detailed verdict in Pervez Musharraf’s treason case. The former military dictator had asked the court to turn down the verdict of a Special Court. The court in its detailed judgement has outlined the reasons behind its earlier short order which declared the formation of the Special Court illegal.

Through a short order on January 13, the bench comprising Justice Syed Mazahar Ali Akbar Naqvi, Justice Muhammad Ameer Bhatti and Justice Chaudhry Masood Jahangir had set aside all proceedings starting from filing of complaint, formation of a special court, trial in absentia and conclusion of the trial.

A full bench of the high court made the observation in its detailed judgement on a petition filed by former military ruler retired Gen Pervez Musharraf challenging his conviction by a special court for high treason.https://t.co/e7hcDWnYSi— Dawn.com (@dawn_com) January 28, 2020

The 36-page detailed verdict was authored by the head of a three-member bench Justice Syed Mazahar Ali Akbar Naqvi.

2. Musharraf was tried for suspending the constitution, which wasnt an offence in 2007. This amounts to retrospective punishment

False. SC has held holding constitution in abeyance is subverting the constitution, and subversion has been a part of Art 6 (high treason) since 1973 pic.twitter.com/7ZBLK9Molh— Reema Omer (@reema_omer) December 18, 2019

The court observed that approval was not sought from federal cabinet in terms of Article 90(1) of the Constitution before filing the compliant against Musharraf.

The bench expunged clause 9 of the Criminal Law Special Court (Amendment) Act 1976 as in insistence with Article 8 which says “Laws inconsistent with or in derogation of fundamental rights will be void”.

The SC went on to state that since General Musharraf is an absconder, he “has lost the right to audience…and has lost the right to have an advocate appointed to defend him unless and until the accused surrenders before the court.” Thus, the SC directed the special court to proceed with the trial in General Musharraf’s absence if he failed to appear before the next date of the hearing i.e. May 2, 2019.

Read more: Not only Verdict but Special Court is Unconstitutional: LHC stuns in Musharraf case

The legal community is divided on the LHC’s detailed verdict. Some lawyers believe that the LHC did not have constitutional authority to hear this case or pass an order which categorically contradicts with the earlier decisions of the Supreme Court.

LHC decision in Musharraf’s treason case may be unsurprising, but “reasoning” is truly laughable:

Shameful, to say the least

A legal expert told GVS that “if an unreasonable verdict has been penned down by the Supreme Court then any high court in this country is not entitled to correct it”. He further noted “the apex court can correct itself but any subordinate court does not have jurisdiction to pass any order contrary to what the SC has outlined”.

In the instant case, the apex court formed a Special Court on the request of then-Prime Minister Nawaz Sharif. Analysts believe that if the attempt was illegal or politically motivated then why did the court pass instructions to form a Special court?

Judge Waqar Seth wrote in the judgement, “we direct the law enforcement agencies to strive their level best to apprehend the fugitive/convict and to ensure that the punishment is inflicted as per law and if found dead, his corpse be dragged to the D-Chowk, Islamabad, Pakistan and be hanged for 03 days”. The government claimed to file a reference against the same judge who is not mentally fit. Later on, the government changed its mind.

Prime Minister Imran Khan said that the special court’s detailed verdict in the former military ruler’s high treason case is an attempt to create “anarchy” and “unrest” in the country, as the federal government decided to move the Supreme Judicial Council (SJC) against the judge who authored the decision.

“I was not given right to self-defence”

Former president General (retd) Pervez Musharraf termed the special court’s verdict dubious, saying that no precedent can be found for such a decision where neither the accused nor his lawyer were given the fundamental right to defend the case.

Pervez Musharraf said that he was targeted by officials who hold high positions. He went on to say that the case was heard because of some personal outrage while those judges who benefitted in his tenure are misusing their position against him. “The choice of events according to their intentions shows what these people want,” he asserted, adding that he is grateful to the army and the public for remembering his services.

“Due process was not followed”

The Pakistan Army said that the “due legal process” was not followed in the high treason case against its former chief Pervez Musharraf.  In a statement, the military’s media wing said that the army received the decision of the special court handing Musharraf a death sentence under Article 6 of the Constitution “with lot of pain and anguish”. “An ex-Army Chief, Chairman Joint Chief of Staff Committee and President of Pakistan, who has served the country for over 40 years, fought wars for the defense of the country can surely never be a traitor,” the ISPR statement said.

It is to be seen whether the Supreme Court turns down the LHC’s decision or not. But this case is likely to raise serious question about the jurisdiction of the high courts in Pakistan.

Zafar Hijzai in hospital instead of Jail: How the powerful don’t face the music