December 16 marks the fifth anniversary of the brutal and barbaric APS massacre, which claimed the lives of over 140 students and teachers. The parents of the martyrs will carry out a rally and an official event to be held at the APS Peshawar. 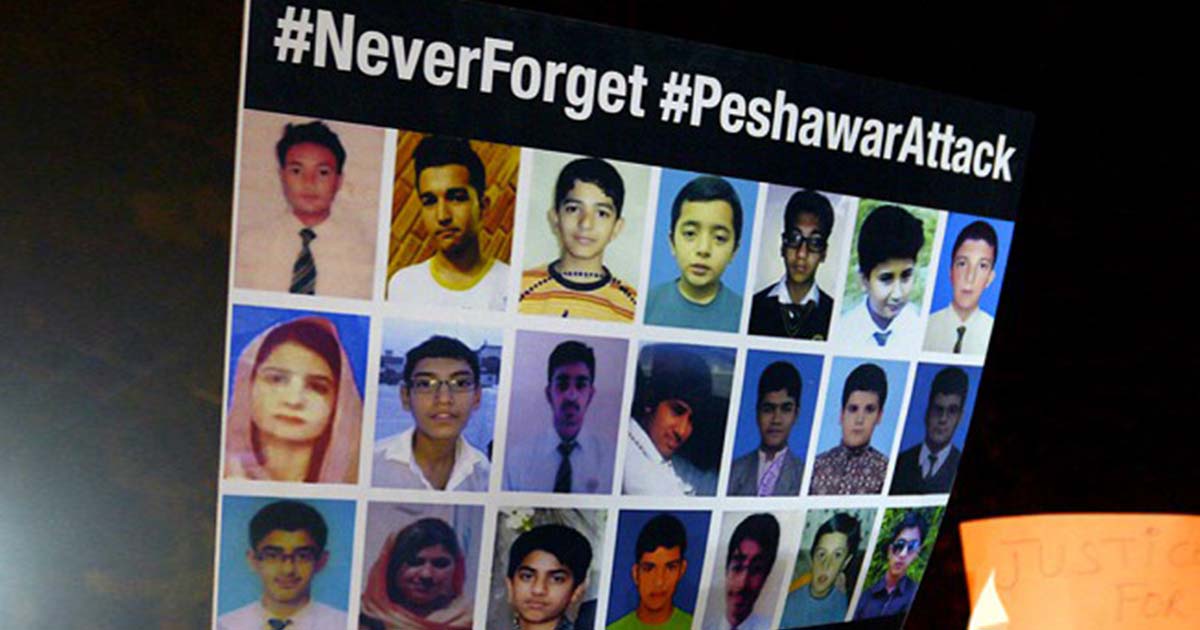 December 16 is a day of mourning for the people of Pakistan, as it commemorates the anniversary of the bloodiest, most barbaric massacre the country witnessed during its war against terrorism.

Even though the province of Khyber Pakhtunkhwa and the city of Peshawar was no stranger to bloodshed, violence, and terrorism, but the events of December 16, 2014, rocked not only the country but the entire world with the sheer barbarity of the attackers.

On December 16, 2014, a group of heavily armed militants walked into the Army Public School (APS) in Peshawar, and mercilessly rammed barrages of bullets into teachers, students and any who dared cross their path. That morning, more than 140 innocents were martyred, of which children formed a clear majority.

The event has been described as a methodical slaughter, and within hours of the attack, the mourns and cries emerging from Peshawar pierced through the skies as devastated parents and mothers took the bodies of their children to the streets, demanding justice. Small coffins being carried off to mosques with wails of family members penetrating the skies became a common occurrence in the city of Flowers.

Pakistan has made numerous costs and sacrifices in its war against terrorism, but the APS attack was a blow that the country has still not recovered from. The loss of those children and teachers is not only felt by their family members, but also by the rest of the countrymen who saw the barbaric events unfold from their television screens.

In honor of the APS anniversary, join GVS in remembering the beautiful angels that we lost to the scourge of terrorism five years ago.

The barbaric attack, carried out by militants of the Tehreek-e-Taliban Pakistan (TTP), claimed 141 lives, including students and teachers. The victims included children of all ages, and with each student, died a million dreams and visions for the future. Names not Numbers, a Facebook page run by prominent academician Sadia Malik has kept a meticulous record of the lives and stories of the APS martyrs.

One of the martyred students was 18-year old Aiman Khan, who was enrolled in the second year of pre-engineering at the Army Public School. Aiman was a car enthusiast and harbored a passion for collecting spare parts and putting them together. He had planned to complete his aeronautical engineering degree, Aiman had plans to join the Pakistan Air Force.

Young Aiman was engaged to his cousin Asma, and the two were set to tie the knot in 2015. His mother had lovingly curated his wardrobe, planning on creating a blue or black sherwani for her son. But the nightmare that ensued on December 16, 2014, left young Aiman riddled with bullets. At the time of the attack, Aiman was in the computer lab, and upon hearing the gunshots, he ran out.

Seeing the terrorists firing indiscriminately at his friends and teachers, he grabbed one of them from behind and his body was riddled with bullets. Aiman met his creator after being hit with six bullets. His family honored his memory by setting up the Aiman Khan Shaheed APS Welfare Society, dedicated to education, child labor, poverty, and women development.

Six-year-old Khaula’s first day at the Army Public School Toddler Academy turned out to be her last day in the world. She was the youngest female student to have lost her life in the barbaric massacre. A student of Grade 1, Khaula was the daughter of APS English teacher Mr. Altaf Hussain, and her other siblings were also enrolled in the same school.

Khaula was a sensitive and bright child who adored reading storybooks and coloring with her favorite color, red. A dedicated student, Khaula was very excited for her first day at school and even skipped her morning breakfast in the anticipation for the day to start. Clad in her black midi and turtleneck, she arrived at the Admin Block for her form submission when the firing began. Leaving her in the Computer Lab with other teachers, her father ran down to the auditorium, towards the terrorists who were firing indiscriminately and barring all exit and entry points.

Soon, the attackers headed towards the Computer Lab, and Khaula was shot dead with a bullet in the head. Her father, who was shot twice in the torso, kept calling out his daughter’s name, but the little one had perished alongside many others. Her father continues to teach at the same school.

15-year old Bilal Ali was a fun-loving teenager who is remembered by his friends for his ability to style up his hair in neat spikes, and flaunting the latest aviators with the pocket money his father would give him. Aside from his love for fashion, Bilal was a dedicated student and a consistent claimant of the 1st position in his class. A caring sibling, loving grandchild and doted son, Bilal aspired to become an officer in the Pakistan Army.

When the terrorists attacked the Auditorium, Bilal was fatally shot in the head, and he quickly succumbed to the injury. His brother, Shahkar, found him lying dead on the floor of the auditorium after making his way through the countless dead bodies of little children that lined up the auditorium.

16-year old Hassan‘s parents still talk to his pictures and sleep with his old photographs tucked close to their hearts. Hassan’s mother misses preparing his favorite fish and vegetables, while his father has shunned all colors, wearing only black clothes since his death. His three parrots have outlived him, reminding his family of the caring and devoted soul that Hassan once used to tend to these birds.

Hassan was targeted by the terrorists as he was on his way towards the auditorium. The 16-year old was shot in the back, and later, an assailant hit his heart with the butt of his gun, rupturing Hassan’s heart. Injured and bruised, Hassan managed to escape to the staff room, where he passed away due to excessive bleeding and low blood pressure, while his father waited outside the school gate, pleading the guards to let him in.

Each story from the barbaric APS massacre drowns us with grief and sorrow. Today, Pakistan commemorates the tragedy with a vow to collectively fight against the scourge of terrorism, and aid the armed forces in their campaigns to eradicate this menace.

Parents of the martyrs have organized several events and candlelight vigils to commemorate the death anniversaries of their children. The main official program is to be held on the APS campus later today (Monday) and it will be attended by the parents, senior military officers and officials from the Khyber Pakhtunkhwa government.