No Aid: US sets requirements for Syrian reconstruction 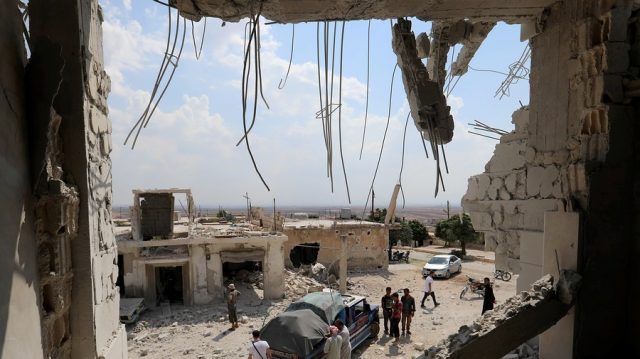 The United States said Wednesday it will refuse any post-war reconstruction assistance to Syria if Iran is present, expanding the rationale for US involvement in the conflict. Secretary of State Mike Pompeo, speaking to a pro-Israel group, vowed an aggressive push to counter Iran across the Middle East and said that Syria was a decisive battleground.

“The onus for expelling Iran from the country falls on the Syrian government, which bears responsibility for its presence there,” Pompeo told the Jewish Institute for National Security of America. “If Syria doesn’t ensure the total withdrawal of Iranian-backed troops, it will not receive one single dollar from the United States for reconstruction,” Pompeo said.

Israeli Prime Minister Benjamin Netanyahu has similarly warned that he will never accept an Iranian presence in Syria.

Pompeo’s speech effectively broadens the official explanation for why the United States is involved in Syria’s civil war, which a monitoring group says has killed close to 365,000 people since 2011. Former President Barack Obama authorized military action with the goal of rooting out the Islamic State group, or ISIS, the extremist force that has boasted of a slew of grisly attacks both in Syria and the West.

The United States has about 2,000 troops in Syria, primarily to train and advise forces other than ISIS that is waging an increasingly precarious fight to topple President Bashar al-Assad. Pompeo acknowledged that Assad was stronger thanks to the Iranian and Russian help and said that, with ISIS “beaten into a shadow of its former self,” new priorities had emerged.

“Defeating ISIS, which was once our primary focus, continues to be a priority. But it will now be joined by two other mutually reinforcing objectives,” Pompeo said. “These include a peaceful political resolution to the Syrian conflict and the removal of all Iranian and Iranian-backed forces from Syria.”

The US funding threats are unlikely to make an immediate impact in Syria. Trump, a vocal critic of foreign aid as he promotes an “America First” policy, in August pulled the United States out of Syria’s near-term reconstruction, suspending $230 million after Gulf Arab allies made their own pledges.

Pompeo also did not demand a withdrawal by Russia, which maintains its only permanent military base outside the former Soviet Union in Syria, a Cold War ally.

But Pompeo’s speech marks a new sign that the United States is not leaving Syria anytime soon after Trump, a onetime critic of foreign interventions, earlier this year mused aloud about withdrawing troops. Trump’s national security adviser John Bolton, a longtime hawk on Iran, told reporters last month that US troops would stay “as long as Iranian troops are outside Iranian borders.”

Iran, ruled by Shiite Muslim clerics, has deployed both troops and its Lebanese ally Hezbollah to prop up Assad, a secular leader who belongs to the Alawite sect and is facing down hardline Sunni Muslim forces. “Iran has seen instability in Syria as a golden opportunity to tip the regional balance of power in its favor,” Pompeo said.

He warned that Iran, a sworn foe of Israel, would open a new front against the Jewish state if it remained in Syria. Israeli Prime Minister Benjamin Netanyahu has similarly warned that he will never accept an Iranian presence in Syria.

Trump has withdrawn from an international agreement negotiated under Obama through which Iran slashed its sensitive nuclear work in exchange for sanctions relief. Pompeo boasted that Trump has imposed on Iran “some of the harshest sanctions in history.” The Trump administration has closely allied itself with both Israel and Saudi Arabia, the Sunni kingdom which sees Iran as its chief rival in the region.

Pompeo in his speech did not air any criticism of Saudi Arabia, which has been accused by Turkish government sources of killing a prominent Saudi journalist last week inside its Istanbul consulate. Pompeo also did not demand a withdrawal by Russia, which maintains its only permanent military base outside the former Soviet Union in Syria, a Cold War ally.

Can Hindu temple be built with taxpayer’s money in Pakistan: Hamza Ali Abbasi