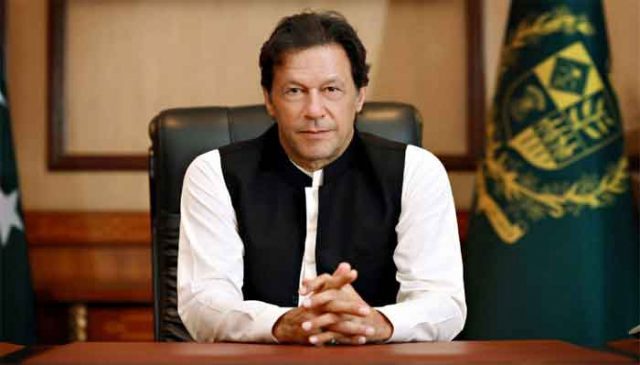 Prime Minister of Pakistan Imran Khan– who has been making headlines since India, Pakistan’s arch-rival, violated its airspace– has now been nominated by peace-loving people from across the world for the Nobel Peace Prize. After PM Khan’s bold decision to return captured Indian piolet, Wing Commander Abhinandan Varthman, as a gesture of peace, to his nation, the netizens started demanding the said award for him.

Social media users managed to make #NobelPeacePrizeForImranKhan the top trend in Pakistan yesterday and also started a petition to nominate Khan to win the prize.

PM Khan is known for his welfare works; the construction of a cancer hospital, Shaukat Khanam Hospital in Lahore and an international standard university, NAMAL in Mianwali to facilitate the poor people.

It is important to mention here that each year, one person or organization is awarded the Nobel Peace Prize for “the most or the best work for fraternity between nations, for the abolition or reduction of standing armies and for the holding and promotion of peace congresses.” The Nobel Peace Prize is an international prize awarded annually by the Norwegian Nobel Committee according to the rules set forth in the will of Alfred Nobel. Alfred Nobel was a Swedish Chemist who is known for inventing dynamite.

The campaign started by Rameez Asif on the global petitioning platform change.org aimed to gain 50,000 signatures. However, the petition achieved its target so quickly that he soon had to change its goal to 150,000 signs. But PM Khan’s fans achieved the target in hours. Mr. Asif then changed its goal to 200, 000. Currently, over 151, 000 have signed it.

Andleeb Abbas who is a prominent leader of Pakistan Tehreek-e-Insaf (PTI) and currently Pakistan’s Federal Parliamentary Secretary for foreign affairs quoted American theologian and author James Freeman Clarke. Using her handle, @AndleebAbbas, she tweeted: “‘A politician thinks of the next election, a statesman thinks of the next generation’… James Freeman Clarke … #NobelPeacePrizeForImranKhan”

Another person said “Mr Prime Minister I am so proud of you releasing the Indian pilot. It’s show you are extra ordinary leader and you deserve for Nobel prize for peace.”

Mr Prime Minister I am so proud of you releasing the Indian pilot. It's show you are extra ordinary leader and you deserve for Nobel prize for peace. https://t.co/1kf126Nw5r

Even some Indians also supported the trend in Pakistan and demanded peace prize for Pakistan’s statesman. Zohad, an Indian citizen, shared an image with an Indian youngster thanking Khan and wrote: “A picture worth a thousand words. #NobelPeacePrizeForImranKhan”

Jeremy McLellan, an American comedian, said: “Can we take Obama’s Nobel Peace Prize away and give it to Imran Khan?”

Can we take Obama’s Nobel Peace Prize away and give it to Imran Khan?

If Modi is so powerful, then why is kulbhushan Jadhav in Pakistani jail for 3 years? Stop this nonsense.
#NobelPeacePrizeForImranKhan#GoBackModi

The Man of Steel and a Symbol of Peace and Humanity #NobelPeacePrizeForImranKhan pic.twitter.com/rXQpI69es3

#GoBackModi trends internationally Such UAE, PAkistan, and India…Presenting Modi's Failure? Where as #NobelPeacePrizeForImranKhan shows popularity of peace…That shows every body love to peace in world pic.twitter.com/5pNT33h861

PM Khan is known for his welfare works; the construction of a cancer hospital, Shaukat Khanam Hospital in Lahore and an international standard university, NAMAL in Mianwali to facilitate the poor people. PM Khan recently won the hearts of people when he ordered to immediately provide shelters to homeless persons in all mega cities of the country. And now setting, like a statesman, PM Khan as a good-will gesture returned the Indian pilot to make sure that regional peace can sustain by avoiding getting into unnecessary war.

While commenting on the development an observer said: “this is something which can only be done by Imran Khan.” For many poor Pakistanis, he is the only hope to eliminate corruption, reduce poverty, and ensure better governance in the country.

Was Pakistan a bulwark against both Soviet & Hindu Imperialism?

Pakistan’s envoy: India to use UNSC membership to obfuscate terrorism

UAE and Saudi Arabia want to acquire nuclear weapons, and the US is livid