A complete research into the Pakistan & Indian Air Force's assets and their might in sea. The article includes a complete list of manpower and weaponry both the air forces hold.

Air Force is the leg of the Armed Forces of the country that is responsible primarily for conducting aerial warfare. These aerial warfare are distinct from other two forces i.e. Army & Navy. Typically, air force is responsible for gaining control of country’s airspace and protecting it from any kind of land or aerial penetration.

An air force’s job description also is to provide support to ground and naval forces of country often in the form of aerial reconnaissance and close air support. Air force is often indulged in strategic and tactical bombing missions or tailored surgical strikes behind enemy lines.

In February 2019, Pakistani and Indian air forces crossed paths with latter losing planes and former capturing an Indian pilot. Several claims were made of air superiority as have been for past many years. 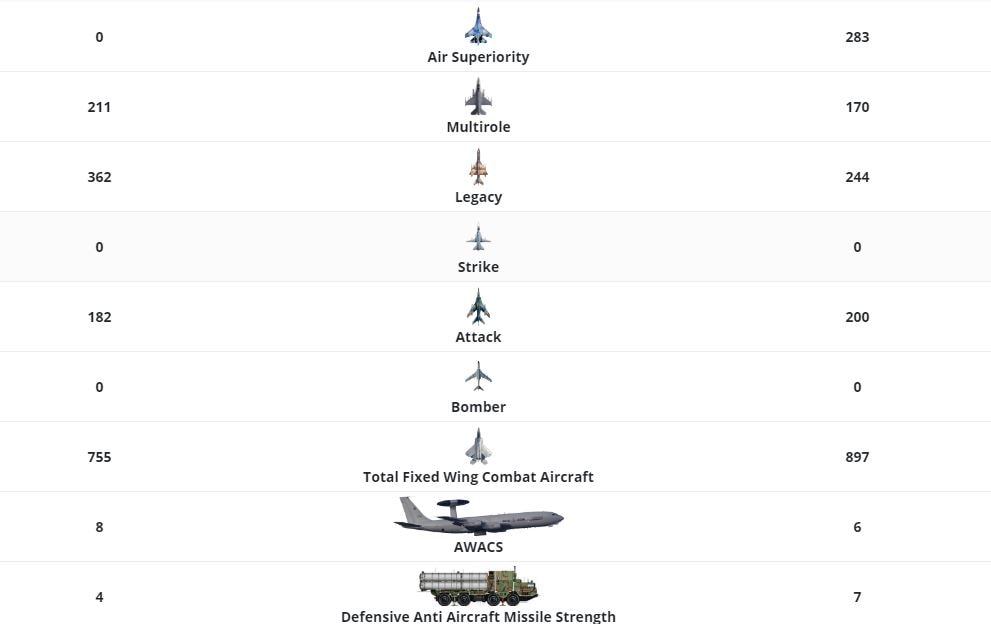 But on what basis were these claims made? Man-power? Weaponry? Let’s delve into complete research about the manpower and the range of weapons both the air forces hold. What planes do they fly? What helicopters hover over their air spaces?

All the figures in the article have been taken from “Military Watch”.

Keep in mind that this is just a comparison of the assets both the navies hold, we are not endorsing a conflict OR by any mean making assumptions about war.

This comparison is restricted only to the Air forces i.e. Pakistan Air Force & Indian Air Force.

Aerial weapons are of a different breed than land and Sea. Here is a complete list of weaponry that both countries possess.

These are specialized heavy platforms with airframes built for and dedicated to air to air combat. These are high end & costly fighter jets only ever produced by Russia, the United States and China.

These fighter jets are non specialized lighter platforms with lower acquisition and operational costs. They are capable of fulfilling air to ground and air to air roles.

Legacy fighter jets are older jet fighters preceding the Fourth Generation. Many of these platforms have been extensively modernized and can be formidable in combat.

Heavy fighters specialized in an air to ground role, while retaining limited air to air combat capabilities. Capable of carrying bombs and missiles which are used to strike targets from high altitudes.

These jets are “Light or Medium” weight fighters designed to operate from low altitudes against enemy ground forces. They are very often well armored, and making heavy use of weapons such as short range anti-tank missiles and rotary cannons. Attack jets rarely possess air to air combat capabilities.

These are the largest, heaviest and longest ranged combat aircraft in service. Traditionally bombers were designed to deliver nuclear and conventional payloads too far off enemy targets – often on other continents, modern bombers have often been equipped with long range cruise missiles to reduce vulnerability to enemy air defenses.

One of the three traditional pillars of a nuclear delivery forces, in service today only in the United States, China, Russia and North Korea.

A fixed-wing aircraft is heavier than air, propelled by a screw propeller or a high-velocity jet, and supported by the dynamic reaction of the air against its wings.

Pakistan currently does not own any 4th Generation Carrier Based Multirole.

They are further divided into 3 ranges.

Pakistan scored 4 out of 10 in its anti-aircraft missile system capability.

India scored 7 out of 10 in its anti-aircraft missile system capability.

US tanks will be ‘destroyed’ in Ukraine – ambassador