Pakistan: No option but to hit back at India & its Afghan proxy 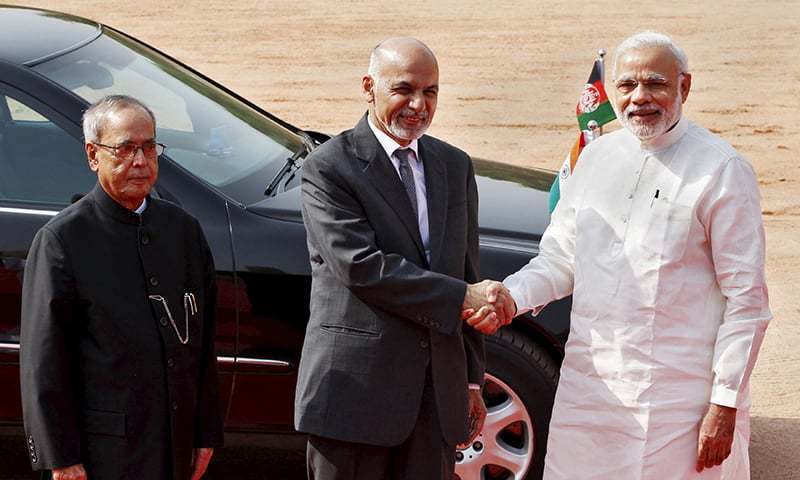 Rule one on the page of the book of war is: do not march on Moscow. This was said by Field Marshal Montgomery (House of Lords, May 1962). However, he didn’t talk about rule two, which is: ‘never make war with Afghans’. But what if the Afghans themselves want to make war? And if they draw the sword should we return ours to the scabbard? And if now we have an insult to avenge should we become avengers and not the professional soldiers that we are?

What is Afghanistan up to and how should Pakistan respond to an Afghanistan which is getting more and more Indianized in its speech and act?

If India was not playing the role of a spoiler would we ever have an Afghanistan that would duck and dodge the Pakistani offers of dialogue and instead respond by carrying out unprovoked firing at Pakistani troops guarding a census team (5th May 2017)? This latest Afghan firing incident demonstrates that the Afghan guns have also started speaking the Indian language of murdering the innocent civilians that live across the border divide. If their guns now speak Indian language what about the mindset and mentality of the Afghan generals and their military officers that get training exposures in the Indian military academies and training schools?

Read more: Will Pakistanis & Afghans be able to see through the Indian great game?

Days before this unnecessary firing incident in Killi Luqman and Killi Jahangir villages of border District of Chaman (in which 10 innocent people were killed and over 40 injured) Pakistan had made some serious efforts to warm up the Pak-Afghan relations. First a high-level military delegation led by CGS Lt Gen Bilal Akbar visited Kabul and later the DG ISI Lt Gen Naveed Mukhtar also visited the country. These were high profile visits considering the unquestionable role that Pakistan military and its intelligence agency are likely to play in determining what shape and course our future relations with Afghanistan should take? Yet the Afghan President who was invited to visit Pakistan refused to visit and now this firing incident. What is Afghanistan up to and how should Pakistan respond to an Afghanistan which is getting more and more Indianized in its speech and act?

Does India want to squeeze Pakistan by propelling Afghanistan?

One cowardly retaliatory action that the Indians have already carried out is the abduction of Retired Lieutenant Colonel Habib of Pakistan army. Picked up from Nepal airport and driven to India, the abduction looks like a response act to the arrest of Indian spy Kulbhushan Jhadav.

The Indian guided Afghan motive is clear unless green-signaled by India, ‘rapprochement must always stay away and beyond Pakistan’s reach’. The now not so veiled Indian-Afghan dual policy of building pressure on Pakistan calls for creating a “sandwich effect” in which no major wars of conquests but limited and small scale proxies and military actions (like the recent one in Chamman) should be carried out with a view to damage and hurt the pride and prestige of Pakistan’s military. The paradigm is there at the Eastern front for Afghans to emulate. The front (Pakistan shares a 3,323 km boundary with India including 749 km LOC) where the bellicose Indian army continues to threaten Pakistan with a likelihood of retaliatory military actions and surgical strikes. The latest comes from their military chief.

Read more: Af-Pak border heating up: Who is to be blamed?

Speaking after the recent killing of two Indian soldiers on the Indian side of the border (for which India accuses Pakistan Army and for which it has no proofs) its military chief, General Bipin Rawat, said, “When this kind of action takes place, we also carry out retaliatory action… We do not talk about future plans beforehand. We share details after execution of the plan.”

One cowardly retaliatory action that the Indians have already carried out is the abduction of Retired Lieutenant Colonel Habib of Pakistan army. Picked up from Nepal airport and driven to India, the abduction looks like a response act to the arrest of Indian spy Kulbhushan Jhadav. Another one that comes to mind is the sinking of a Pakistani boat (fishing vessel) off the Gujarat coast on the night of 31 Dec 2015. The DIG of the Indian Coast Guard B K Loshali who made this claim which was caught on the video and went viral was dismissed from service not for telling the truth but ‘contradicting the government’s version of the destruction of the boat’ – and the Indian government version was ‘Pakistani fishermen blew up their own boat after Indian navy chase’.

Like for good health, one must avoid saturated fats, similarly, for good neighborly relations, the two nuclear powers must also avoid the small and limited military actions on the border which can fast turn fever (war) into a deathening disease (nuclear war).

In the context of military operations before executing any retaliatory action, the aggressor must first measure the cost of ‘return action’ and only when it is found within the tolerable limits are such military (mis)adventures undertaken. Barring aside the (never happened) Indian surgical strike last year, India is yet to take a military action across the LOC that has not warranted a tit for tat response from Pakistan army. Under Indian military chief’s renewed threats, would Pakistan military not respond and retaliate? That’s a dangerous path that the Indian military chief is choosing to tread – a military choice that will only escalate hostilities between two nuclear-powered states. Like for good health, one must avoid saturated fats, similarly, for good neighborly relations, the two nuclear powers must also avoid the small and limited military actions on the border which can fast turn fever (war) into a deathening disease (nuclear war).

Gen Bipin cannot be expected to have an unprejudiced look at the whole incident and his ‘military bullying’ is in line with the anti-Pakistan ‘political bullying’ that PM Modi has been undertaking since the time he came to power in India. This hardly bemuses Pakistan military – not least because unlike Bangladesh, Myanmar, Bhutan, Nepal, Sri Lanka, and Afghanistan it is not ready to succumb to Indian political and military methods of imposing conditions on the regional countries for drawing favorable responses. No amount of Indian threats would sway Pakistan away from its time-tested national policy of continuing with its political, social, and moral support to the people of Indian-held Kashmir where the Indian forces resort to the worst form of state terrorism.

The message to Pakistani military whether fighting on Eastern or western front is absolutely clear – ‘When under assault you have every right to fight back’.

The basic outline of the Indian-Afghan thinking today reflects that it is anti-Pakistani to the core, where one is Pakistan’s natural and capable enemy and the other is militarily mediocre out there only for India’s support. Even a blind man can see the Afghan paint being painted on Pakistani canvas with the brush in Indian hand.

Both countries join hands to accuse Pakistan of ‘rearing jihadi outfits in its backyard’, ‘sponsoring anti-Indian and anti-Afghan groups like Taliban’s and Jaish-e-Muhammad and Lashkar-e-Taiba and sponsoring and conducting hundreds of terrorist actions through its proxies both in India and Afghanistan. Both these countries need to make sure that their hands are clean before they point fingers at Pakistan.

Lastly, Pakistan should be eagerly awaiting the Indian PMs visit to the USA later this summer. President Obama in September 2015 had asked Indians for defense participation in Afghanistan. Would the Trump administration also want India to concede to the original Obama’s request? The likely contours of Afghan end game and the role the USA wants India to play in it will most likely be clear at the end of this visit.

For now, the message to Pakistani military whether fighting on Eastern or western front is absolutely clear – ‘When under assault you have every right to fight back’.

Dr. Muhammad Ali Ehsan did his doctorate in International Relations from Karachi Univ; where he also teaches. His Ph.D. work is on ‘Civil-Military Relations in Pakistan’. He served for 25 years in Pakistan Army, and remained an Instructor in Pakistan Military Academy. The views expressed in this article are the author’s own and do not necessarily reflect Global Village Space’s editorial policy.

Afghan government to push for ceasefire in talks with Taliban