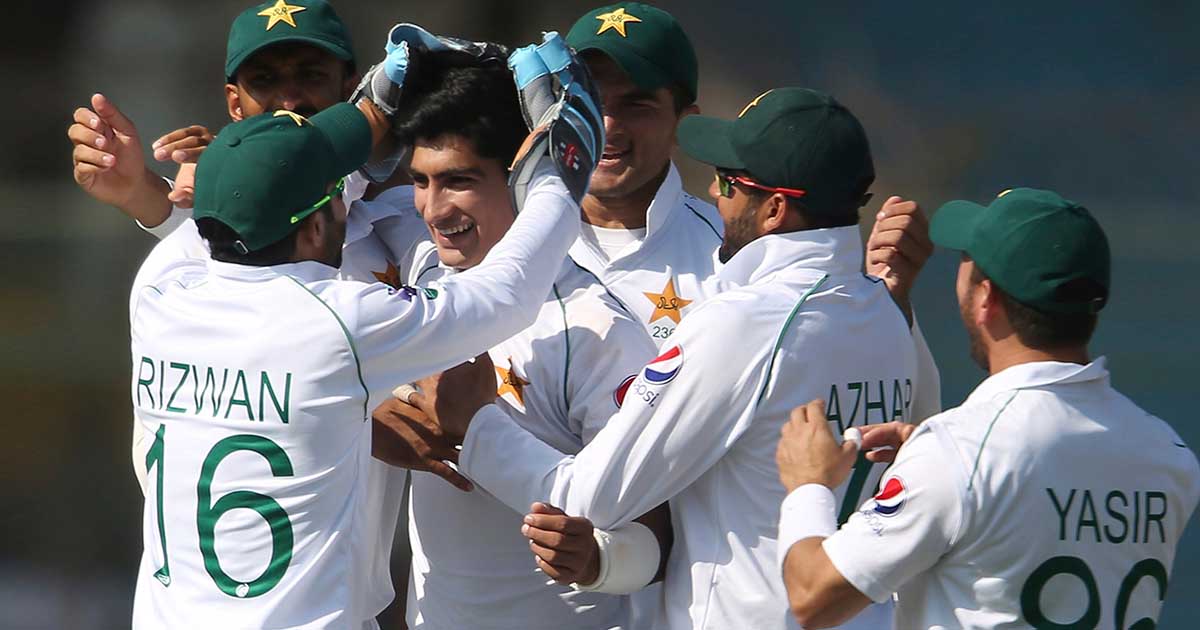 Pakistan clinched a decisive victory against Sri Lanka in a second and last test match of the homecoming series on Monday morning. Green shirts defeated the islanders by 236 runs marking the first test match victory at home ground in 13 years.

The first test match of the series was drawn between Sri Lankan and Pakistan in Rawalpindi. The second and last test match in Karachi commenced on Thursday 19th December in which Pakistani players put up a pack of match-winning performances.

Naseem Shah gets his name registered on the honour board of National Stadium after 5-fer against Sri Lanka at Karachi. pic.twitter.com/1jLT32qivd

The test match series’ triumph has smashed the streak of losses, Pakistan had been witnessing lately. Pakistan’s previous tour to Australia, just ahead of homecoming series against Sri Lanka, was a flop show in which the team reeled on with low-spirited performances in all the cricket formats.

Thank you #PakistanCricketTeam what a glorious start of the day many congs to #NassimShah #ShaheenAfridi and my fav #YasirShah you guys are pride of Pakistan make it big boys….

Nevertheless, the criticism mounted after defeats in Australia withered off marginally following the test match series win against Sri Lanka. Pakistan has ascended to the third spot in the list of ICC World Test with Champions with 240 points following the gain of 80 points. While India and Australia are seated at the first and second positions in the list respectively.

A BIG victory for Pakistan. Young Naseem Shah picks up five wickets, and Sri Lanka are bundled out for 212.

Pakistan win by 263 runs! What a performance from the hosts 👏#PAKvSL pic.twitter.com/mcUOMdxX6T

It took Pakistan just 15 minutes on the final morning to wrap up a historic series win at home. #PAKvSL second Test report 👇https://t.co/yBaQznVrrt

A first series win at home for since 2006

Messages of felicitation pour in on social media following the triumph. The spectacular performances by nascent Naseem Shah and Abid Ali were the highlights of the test match series. Abid Ali has become the talking point in the Pakistani cricket, following his century in debut test against Sri Lanka, in Rawalpindi.

🗓️ December 2019: Picks up five wickets in Karachi, giving 🇵🇰 victory in their first Test series at home in 10 years.

What a turnaround from the young Naseem Shah 🙌 pic.twitter.com/rTa2bh8lHB

Abid Ali is the first Pakistani player to win both man-of-the-match awards in each of his first two tests. Hence, he is also bestowed with a Man of the Series accolade on Monday. Collectively, Abid Ali has scored 321 in his first two test matches.

Certainly, a momentous return for the cricketer after years-long perseverance. He had already won the hearts of Pakistani cricket fans with his ODI century against Australia while chasing 277-7, the match which Pakistan lost by just 6 runs.

Abid Ali has waited 12 years playing domestic cricket, with a record of humongous 7716 runs, and 106 first-class games before being roped in Pakistan’s national cricket team.

I am so proud to see Naseem Shah play for Pakistan & today he took a five wkts. Here are clips of Naseem Shah from my Cricket reality show way back in 2016. We spotted him in open trials in Lahore.1st time we saw him we knew he would go a long way. #PAKvsSL pic.twitter.com/4RW38tJWXq

Pacer, Naseem Shah was another highlight in the homecoming test match series. At the age of 16, Shah has become the youngest fastest bowler to get a five-wicket haul in test cricket. He got his name registered on the National Stadium’s honor board.

Emotions overflowed for Naseem Shah as he sheds his tears.. He always wanted to dedicate his 5-fer to his mother but since she has recently passed away .. he will now be dedicating his success to his father. #PakvSL https://t.co/qkLJJXXp87 pic.twitter.com/Ogp6Gvpb5X

Naseem Shah tells his powerful story.. this is the kind of stuff what heroes are made of.. #PakvSL #Cricket https://t.co/i6Yth5pWqX pic.twitter.com/6XsF1488qW

However, overwhelmed Naseem Shah wept following his success when journalists asked him of his deceased mother in a post-match press conference. Shah wanted to dedicate his victory to his mother but since she is no more he has dedicated his victory to his father.

Shah suffered a painstaking tragedy just before his debut with Pakistan cricket in Australia. The news of his mother’s passing away led the youngster bowler devastated, he, however, decided to stay back with the team and not attend the funeral of his mother at home.

Why India has no interest in another regime change in Sri Lanka?