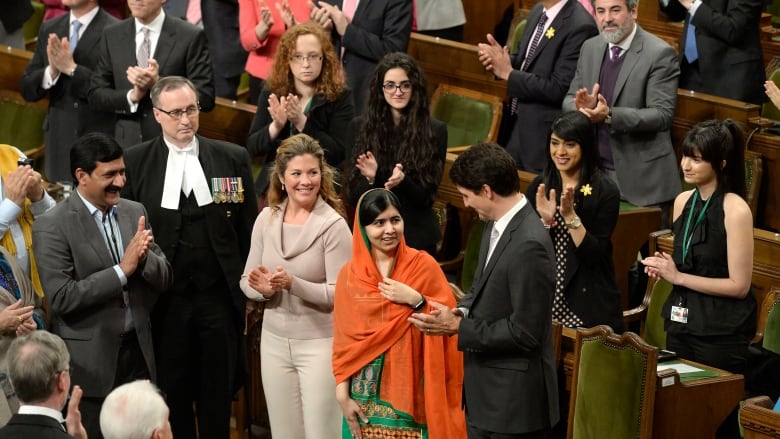 The honorary Canadian citizenship was bestowed upon her on October 21, 2014, to recognize her efforts. But the ceremony was canceled due to its Parliament Hill attack and an ongoing emergency in Ottawa.

Malala Yousafzai is going to be the sixth person in the world to receive an honorary citizenship of Canada.

Justin Trudeau, Canadian Prime minister said, “I look forward to attending the upcoming ceremony and witnessing the historic moment when she becomes the youngest person to address the Parliament of Canada.” He further said, “Ms. Yousafzai’s courageous response to those who threatened her life, and her advocacy for girls’ education, has inspired many millions of people around the world. Her story is one of determination and dignity, and Canada is proud to call her an honorary citizen of this great country.”

Malala, the young Pakistani activist considered the champion of women and girls’ rights, was targeted by Taliban for promoting the right to education. She was 15 years old that time. After surviving the brutal attack she became a spokesperson for education rights for women and children across the globe. She became the co-recipient of the Nobel Peace Prize in 2014.

Malala Yousefzai said in a statement,

“The people of Canada are leading the world in their response to the refugee crisis. I am honored by parliament’s invitation and look forward to visiting this great nation of heroes.”

According to a report in BBC, Malala has been offered to study philosophy, politics, and economics from a top British university.

Malala will be included in the elite and prestigious club of world’s leaders like Nelson Mandela and Myanmar’s  Aung San Suu Kyi.

Read more: Let Women be themselves

Malala provides a soft image for Pakistan, showing that despite difficulties the nation is standing up against terrorism. Moreover, Malala will address Canadian Parliament with her head covered which will give the message that one can achieve anything while following one’s own cultural norms.

It will also encourage Pakistani women that they should not hold back and accept the mindset which forces them to stay at home and not to follow their dreams.

How can PIA get rid of international restriction?