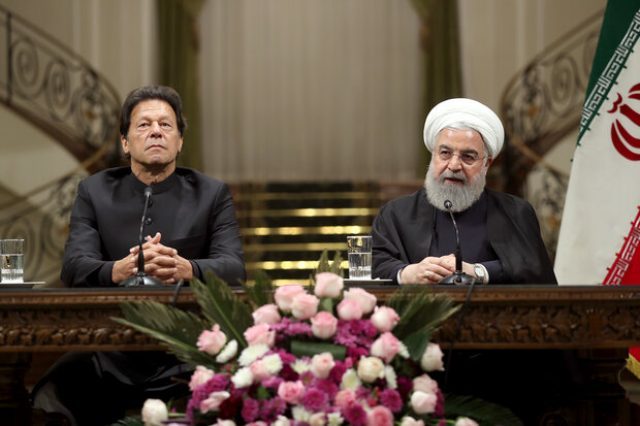 Prime Minister of Pakistan Imran Khan and Iranian President Hassan Rouhani addressed a joint press conference in Tehran on Monday, where the need for improving cooperation in countering terrorism and improving trade relations were stressed.

He said that “We would not have needed a translator in the past. We all used to speak Persian. The court language for 600 years in the Indian subcontinent was Persian.”

The prime minister said “I came here [Iran] in 1972. I saw a big difference between the rich and the poor, a big cultural difference.” Today, he said, “Iran has become a more egalitarian society that is what the revolution has done.”

“That is what we want to do in Naya Pakistan – we want to reduce the difference between the rich and the poor,” he said.

Confronting the Challenge of Terrorism

Prime Minister Imran Khan said, “And the most important reason I am here is because I felt that the issue of terrorism was going to create differences between our countries, so it was important for use to resolve this issue.”

He also praised the Pakistan security agencies for tackling the issue of terrorism in Pakistan. “We are much luckier than Afghanistan in overcoming terrorism,” Imran Khan said.

“We have come to the conclusion we will not allow any militant group to operate from Pakistan,” the prime minister said. It is a decision made after political consensus from within without any outside pressure, he stated.

Prime Minister Imran Khan said, “Just a few days back we have 14 of our security personnel killed in Balochistan.” “I know Iran has suffered from terrorism,” he added. Our security chief will be sitting with his counterpart and discussing this issue and this will build confidence between us, the prime minister said.

Dividends of Peace in Afghanistan

Prime Minister Imran said, four decades of war in Afghanistan had affected Pakistan and Iran. Pakistan hosted four million Afghan refugees at one point. I know, Iran has three million refugees. He said that “It is in the interest of both our countries that there is peace in Afghanistan.”

The whole subcontinent will benefit once the issue is settled. This will help Iran in trade too, the prime minister said. He said justice will bring peace, not force.

“People of Afghanistan have suffered for four decades,” he said. PM said that “Once there is peace there will be more trade between Pakistan and Iran and this will help us raise the standard of living of our people.”

Imran Khan said that “I feel strongly without justice there is no peace and a huge amount of injustice has been done to the Palestinian people.” The Israeli decision to annex Golan Heights and declaring Jerusalem as its capital violate international law, he said.

PM said this will lead to uncertainly in the region. He said that the Indian security forces had been trying to oppress the people of Kashmir. “Over 70,000 people have died in Kashmir,” the PM said.

“I feel the only way is through dialogue and political settlement of the Kashmir issue not through military means,” Imran stressed. The whole subcontinent will benefit once the issue is settled. This will help Iran in trade too, the prime minister said. He said justice will bring peace, not force.

PM said “we discussed ways of improving trade and cooperation between the two countries.” He said that Iran had one of the best primary healthcare system in the world. We have brought our newly appointed health minister to learn from the Iranian experience, PM said.

Imran said, “We can mutually benefit from cooperation in science and technology. We have very limited amount of trade at the moment.” “Thank you, Mr President, for the hospitality and the way the talks have gone,” he said.

Previous articleWhat are the Most Popular Games Created in Japan?
Next articleTop 5 Apps to Help You Deal with Stress during COVID-19 Outbreak

20 September 2021
Previous articleWhat are the Most Popular Games Created in Japan?
Next articleTop 5 Apps to Help You Deal with Stress during COVID-19 Outbreak

The history of secular education in the subcontinent

Can Iran help reach a lasting peace in Afghanistan?