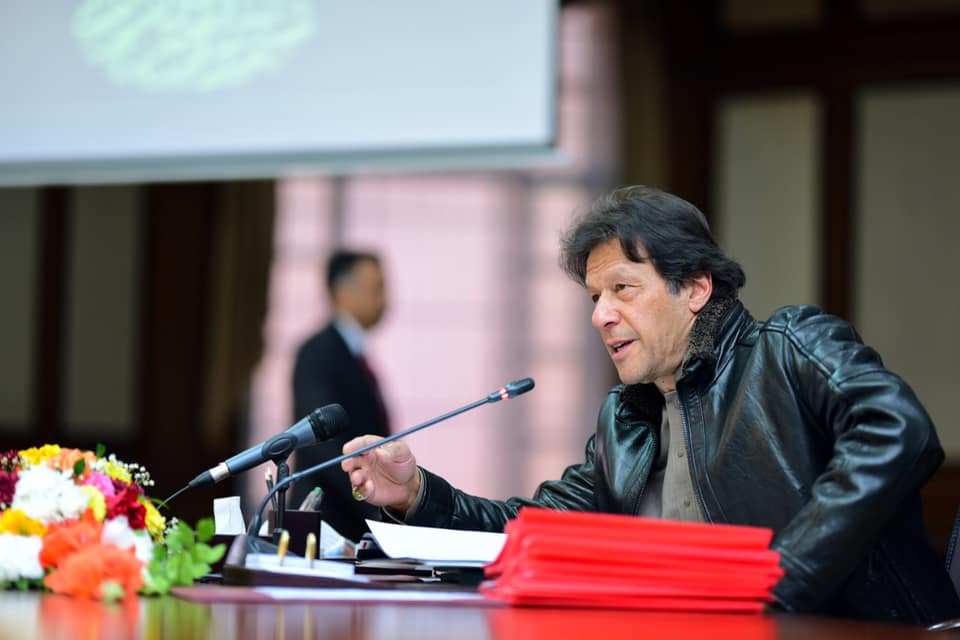 If you do not ask, you do not get a seat at the table. As with any abusive relationship, Pakistan needs to be firm in where its stance will be and be the one setting the direction for the future.  With Pakistan’s leadership being virtually conferred with a Nobel Peace Prize status, we can only see this as a wake-up call to the world about the reality – versus the mythology – of South Asia.  It is important to take stock of what emancipatory lessons we can build upon from the various developments: tracing the past and looking into the future.  Where are we headed? How can Pakistan strengthen its moral leadership? What must it ask for?

The Myth vs. Reality

India’s right-wing BJP government deemed it legitimate to send its fighter jets well into Pakistani territory, all the way to the northwestern province of KPK, as an ostensible act of retaliation against a bomb attack on Indian occupation soldiers last month. Without any evidence whatsoever, New Delhi regurgitated the tired mantra of ‘cross-border terrorism’ sponsored by Islamabad.

Pakistan asked for evidence, and even in the absence of it, was willing to cooperate with India to jointly investigate the bombing. Instead, what then transpired was a spectacular sequence of self-destructive and foolish actions by the Indian political and military elite. After illegally and dangerously sending its fighter jets to bomb ‘militant strongholds’ in Pakistan, the more accurate term for the mission is now being called the Indian surgical ‘tree strike’ – since no evidence of any militants being killed has been provided (even though India claims around 200-300 were killed!).

South Asia has effectively made it play the role of a ‘sub-imperialist’ regional hegemon, or just candidly, the bully in town, this type of matter is always a ‘zero-sum’ game for New Delhi.

On the other hand, Pakistan has clearly shown the evidence of a beautiful forest receiving the brunt of the Indian attack with several trees destroyed. It was clear that Pakistani fighter jets chased the Indian planes back to their side of the territory fairly quickly. And if the main message that India’s hawks wanted to send was that India will not restrain itself in waging all-out war against Pakistan despite the latter’s nuclear deterrence, the Pakistanis gave little time for the Indians to celebrate their moment of joy: Islamabad immediately sent its fighter jets to repeat the same across the border in Indian territory, but was far more eco-friendly – they didn’t lay to waste any trees!

The Goal of Setting Peace is not so filmy and Bollywood needs to stay out of it. The rest of the story is to be seen in the renewed mythology that is now said to be coming out soon in a Bollywood blockbuster hit. The film is supposed to salvage even a minuscule of Indian military ‘pride,’ even if they have to concoct a fictional account to restore ‘lost honour’ of the nation that’s seven times the size of its neighbour that it loves to bully. Having regional hegemon’s actors and actresses be involved in such blatant cinematic political posturing does not have good optics at all, and will certainly cost Bollywood with boycotts and scorn.

However, for those that didn’t not follow the ensuing developments the high-risk saga unleashed by New Dehli warmongers, what then transpired were a series of Indian ‘missteps’ (to put it mildly) and dignified Pakistani political behavior that effectively produced the most dramatic and sudden loss of Indian ‘soft power’ since at least the end of the Cold War. Winning in a dog fight against Indian fighter jets, the Pakistani military was able to protect and care for a downed, captured Indian pilot in their territory – treated so well to his own astonishment.

And throughout this affair, the singular, dignified role of the prime minister of Pakistan, Imran Khan, proved to be the cornerstone of Pakistan’s honourable fortitude and stellar performance. Prime Minister Imran Khan’s sober and impressive appeal to sanity on both sides, to halt the militaristic madness and to resume the diplomacy he’s advocated for since he stepped into office – all stood in such stark contrast to both the politicians and the armed forces in India, who seemed pathologically bloodthirsty.

Without any evidence whatsoever, New Delhi regurgitated the tired mantra of ‘cross-border terrorism’ sponsored by Islamabad.

Where is Gandhi now that Pakistan has its Jinnah on the Way?

Now, isn’t that a role reversal of how we’ve been told to see the two countries? Weren’t we told that India is the largest and greatest democracy on earth, where generals know their place, with good, peaceful, ‘Gandhian’ religion and ‘shining’ with prosperity, whereas Pakistan is the evil ‘illegitimate child’ from partition, or the mischievous step-brother, which has ‘bad’ (violent) religion, and nefarious generals and their dreaded intelligence services mouthing and undertaking venality left, right, and center?

That picture certainly didn’t stand up to scrutiny over the past two weeks, that’s for sure. Within two days of the Indian pilot’s capture, Prime Minister Imran Khan, as an unprecedented gesture of goodwill, handed the pilot back over to India. His behavior compared to his counterpart in India, Narendra Modi, is not even a comparison to speak of: the latter has exposed himself and his coterie of politicians and military men to be state criminals eyeing for war and militarism.

Read more: Facts and alternative facts between India and Pakistan

All of this has not gone unnoticed. It is a remarkable change for media organs, intellectuals, policymakers, and politicians in the West to speak very candidly about India’s culpability and unjustified belligerence in the scenario of the past few weeks. Most importantly, we are witnessing a sea change in the commentary that speaks bluntly of Indian criminality and atrocities in Kashmir, where its occupation soldiers rule and brutalize with impunity.

Winning in a dog fight against Indian fighter jets, the Pakistani military was able to protect and care for a downed, captured Indian pilot in their territory – treated so well to his own astonishment.

And finally, there is an undeniable recognition from these circles that Pakistan, and specifically Imran Khan, has played an extraordinary role in defusing a potentially catastrophic situation. In addition, what was equally surprising and remarkable was that the Organization of Islamic Conference (OIC) had for the first time ever invited India to its meeting, only to finish the convention with a strong denunciation of New Delhi for its overall senseless bellicosity and its specific crimes in Kashmir.

This was astounding considering that many of the Gulf countries and Iran have very close economic relations with India. But those were put aside, and the message was clear: we are on the side of Pakistan and Kashmiris on this one, and there should be no doubt about that. This is why, to once again repeat the past few weeks have represented the most dramatic loss of Indian soft power since the end of the Cold War.

And since India’s arrogance as the ‘big power’ in South Asia has effectively made it play the role of a ‘sub-imperialist’ regional hegemon, or just candidly, the bully in town, this type of matter is always a ‘zero-sum’ game for New Delhi. That is, India is not interested in genuine ‘win-win’ cooperation with its neighbours; rather, it wants total victory for its elites, and everyone else be damned.

Hence, according to this Manichean logic by India’s rulers, this loss for New Dehli has benefitted Pakistan only in the sense that the insane and wild stereotypes of the latter being this ‘pariah,’ ‘rogue,’ and ‘failed’ state can no longer be sustained – as much as of course some Pakistan-o-phobes still try.

Narendra Modi, is not even a comparison to speak of: the latter has exposed himself and his coterie of politicians and military men to be state criminals eyeing for war and militarism.

It is in this light that we believe that moral leadership in Pakistan, in civil society and in government, use this rare opportunity in which long overdue respect has been accorded to the positive role Pakistan can play as a nation advancing peace, prosperity, and justice throughout the region and beyond, to raise some very specific issues that can be immediately addressed.

The Demands Pakistan Needs to Make

Pakistan’s position is sufficiently strong and morally unassailable at this moment to assert for the rights it deserves, and to position it to effectively argue for the cogency of its views internationally. Urgent agenda items that Pakistan has to advocate for in order to set the standards higher for a well-deserved moral high ground include: a) insistence on the UN Resolution affirming the right of self-determination of Kashmiris in the brutal Indian occupation of Kashmir, b) the freeing of Dr. Aafia Siddiqui from the barbaric, inhumane American capture and imprisonment, c) compellingly conveying to Pakistan’s all-weather ally, China, that the worsening situation of the Uighur Muslim population must be urgently addressed; and d) informing the generals in Myanmar that the atrocities and ethnic cleansing against the Rohingya Muslims should halt immediately.

These would be a great start to Pakistan finally playing an exemplary ‘ummahtic’ role, but giving moral leadership and support to all initiatives that de-centre Western hegemony and re-centre the lives, experiences, cultures, histories, and faith traditions of the rest of eighty percent of the world’s planet. Much of Pakistan’s history has been beset by internal and external problems of corruption and authoritarianism combined with slavish subordination to Washington, London, or the Gulf petro-monarchies.

But it’s important to remember: we are the first nation-state defined explicitly by its Muslim-ness in the modern world and are capable of setting the example as leaders of where the world needs to drastically level up in its treatment of the planet’s social majorities. After assuming office, PM Imran Khan made the poignant observation that a nation should be judged not by the state of its rich, but by the condition of its impoverished and marginalized. On those grounds, the world fares very poorly. Pakistan set that bar high. We can do this.

Alia Sarfraz is an attorney from Australia who has worked for the Australian government and blogged for the Center for African Affairs and Global Peace (CAAGLOP) as a UN Volunteer. She serves as Legal Advisor at Kashmir Council of Australia and is part of the Free Aafia Siddiqui Movement. She currently lives in Chicago and is a Blogger and Community Affairs Activist with the Dorothy Brown Coalition and Women’s Committee at Rainbow PUSH.

Junaid S. Ahmad is Secretary-General of the International Movement for a Just World (JUST-Kuala Lumpur); a PhD candidate in Islam and Decolonial thought at the School of Sociology and Social Policy, University of Leeds; a Research Fellow at the Center for Islam and Global Affairs (CIGA-Istanbul); and the Director of the Center for Global Studies at the School of Advanced Studies, University of Management and Technology (UMT), Lahore, Pakistan.

“My Son Imran Khan, I demand the release of your sister Aafia,” Ismat Siddiqui

Who are the Nobel Peace Prize winners?