The recent episode of Pakistan National Games ended with an impressive closing ceremony in Peshawar; with as many as 10,000 Pakistani athletes participating in a series of athletic and sporting events. 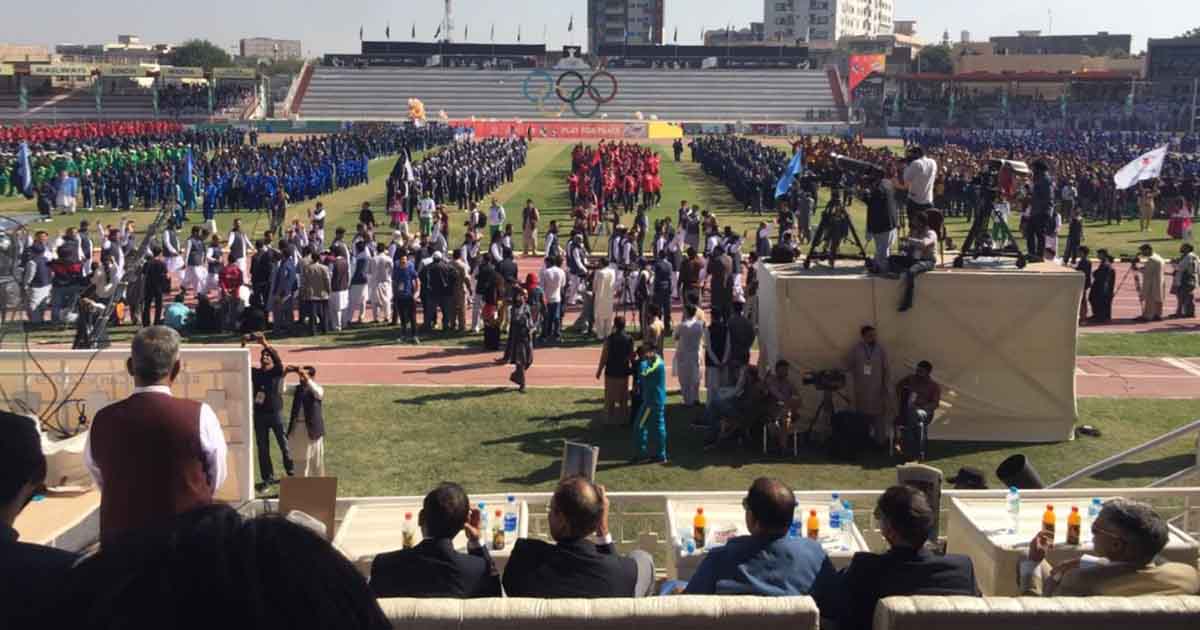 The yearly festive event, used to be the cornerstone of national sport in the KPK region. However, due to security and financial concerns combined, the Government had failed to plan and organize the spectacle in last decade or so.

Back in 2012, the event was assigned to Balochistan. Reports suggest however, that officials from the Balochistan Government failed to come to terms with expectations with regards to arrangements and execution, despite the Government funding a mammoth Rs.800 million.

Moment of great pride when everyone came together to celebrate the successful completion of the #NationalGames2019. Peshawar lit up with electrifying performances and participation in throngs by people who got what they had craved for in a long time- peace and festivity pic.twitter.com/jLZpXLfhEf

The event formally started with an opening ceremony that saw legendary singer Salman Ahmad perform to entertain the crowd with his heart-touching national songs. The participating athletes came from the Pakistan Army, Pakistan Navy, Pakistan Air Force, and civil authorities such as Pakistan Railways, Pakistan Wapda, Higher Education Commission (HEC) and Pakistan Police. The event hosted a diverse range of participants coming from Gilgit Baltistan, Azad Jammu and Kashmir, and other provinces.

More than 8000 players are participating in 33rd National Games. The biggest ever National Games in Pakistan.#NationalGames2019 pic.twitter.com/m68W1qF3VT

The closing ceremony of the 33rd National Games is being held in Qayyum Stadium #Peshawar. The people of Peshawar are invited to attend the historical event, followed by fireworks and music night #MyPlayersMyCountry pic.twitter.com/VQbU9rrMwb

Read more: Peshawar National Games: City We Do Not See & City We Need To See

Pakistan’s women athletes also exhibited a memorable performance at the Games, breaking six out of the nine records. Najma Parveen, an Olympian from WAPDA secured 6 gold medals, and three national records in 200m and 400m hurdles.

The verses from Holy Quran were recited by Hina Khan at the interval of event’s grand closing, and later, children from the Agriculture Model School performed on the national anthem.

33rd National Games has successfully concluded in Peshawar. Once again Pak Army team has lift the Quaid Azam trophy. The games formally ended with a fascinating closing ceremony. Governor KP @ShahFarman_PTI was the chief guest. It was the mega event of sports.#MyPlayersMyCountry pic.twitter.com/5rLj6cApRA

The event turned out to be a massive success considering it had been continually postponed in recent times; reports revealing that multiple postponements had led to a grave loss of money setting up training camps and training athletes. However, with admirable efforts of both the Pakistan Olympics Association and the provincial authorities, the event progressed smoothly.

The successful execution of the event has most definitely instilled lost confidence in the nation as a whole, while also bettering KPK’s global image on peace and security.

The Pakistan Olympic Authority has now laid down a marker clearly stating it will penalize units which fail to organize the games within the given schedule. It is worth applauding contributions of Syed Aqil Shah, head of the KP Olympic Association, for his tremendous efforts at resolving problems during the implementation stage of the event, while undertaking the challenging task of organizing the Games in such a short span of time. His praiseworthy efforts, alongside those of KP’s Chief Minister, Mehmood Khan and Minister Atif Khan, allowed the province to celebrate such a raving spectacle.