Maulana Fazlur Rehman abruptly ending the 'Azadi March' poses many questions. Was Maulana in Islamabad with an agenda to free Nawaz and Zardari? Imran Khan's ouster lost its importance to Maulana, moment Nawaz Sharif was out. 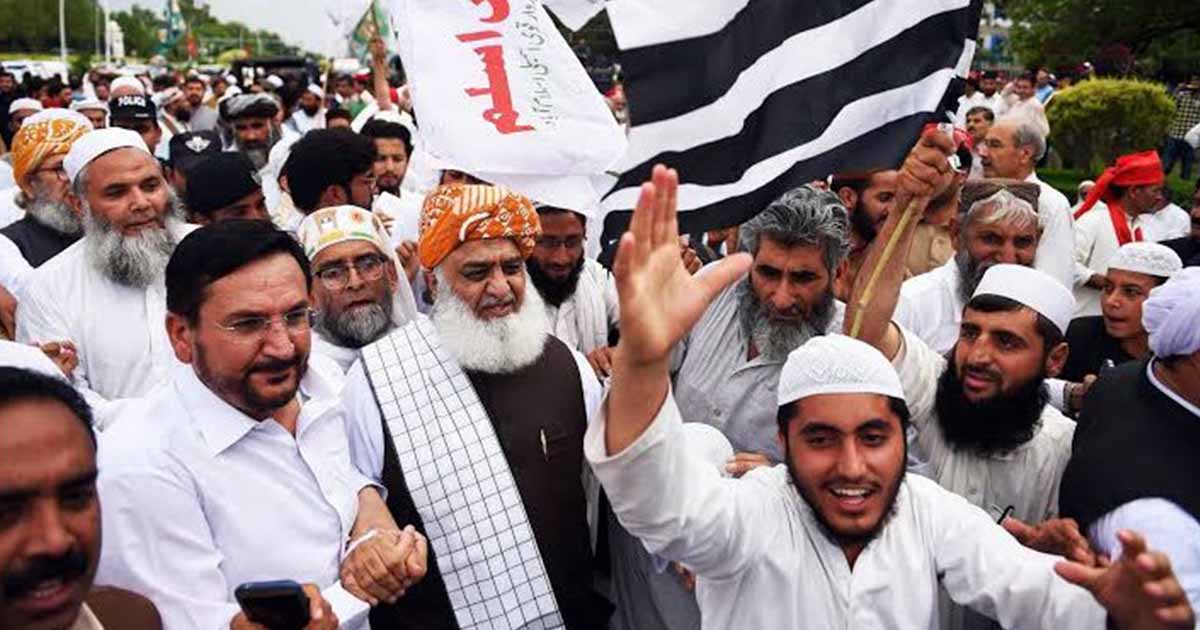 Having made the ouster of the PTI government their common aim the opposition parties of Pakistan have reached a dead end. None of their announced goals, that is the resignation of PM Imran Khan came to nothing and only part of their unannounced goals that included the freeing PML(N) leader Nawaz Sharif from jail and getting him out of the country while moving PPP’s Asif Zardari from jail in Islamabad to a “jail” in Sindh.

GOP’s patience as well as filibustering with negotiations till mother nature intervened prevailed. Fazlur Rahman finished his ‘Azadi March’ in Islamabad in quite a hurry in view of the cold weather and rain that otherwise always is characteristic of this time of the year for the capital. So nothing extraordinary there. And yes, ‘General Winter’ has defeated more substantial armies, among them Napoleon and Hitler’s, than that of the Maulana! The marchers were seen packing in a hurry immediately after their leader had finished his speech.

With “Dharna fatigue” setting in many of his supporters had already left during the rains last week, he had hardly any other option. Their most funny complaint was that about the missing hygiene, did they expect the PTI to clear their garbage? The government should have given the permission for such an upheaval only if the protesters clean up after themselves or pay for it. Instead, Imran Khan gave them not only water and food but even free medical treatment! Fazl and his followers were quite pampered.

Fazlur Rahman’s crowd exited without any positive result in hand, without even a so-called face-saving gift of the government, some have even called his departure ‘abrupt’ because the marchers disappeared from the venue after only 13 days instead of the promised ‘months and months’ that Fazl was threatening. With Plan “A” going up in smoke, he has now announced that now his Plan ‘B’, namely extension of the protest across the whole country.

One really wonders how far his self-delusion can go; the media has stoked his imagination that his small party, always just the personal resource for Fazl’s political aggrandizement, has now become a big party! The first wake-up call should have been the PPP’s comment that there can’t be any permission for road blockages in their home province! Obviously, the Maulana failed to get a clearance for his Plan ‘B’ from the “Rahbar Committee”, maybe he went ahead notwithstanding because he already knew that he wouldn’t get their support.

Both the big opposition parties support has been weak from the beginning; their main concern was that their parties were not ready for any major mass protest and then the fact that winter was approaching was not a secret. So they acted cautiously which now in a way saves them from the main defeat that JUI (F) and Fazl himself have to face.

The second plan that partly went “kaput” was the freeing of Nawaz Sharif who was convicted for corruption and serving time in jail. Conveniently (and quite coincidentally), he got ill right in time for this, one wonders why whatever illness he has cannot be treated in Pakistan. Money is no issue and medication and even doctors can be flown in for him.

So the drama going on suggests that the real purpose is his leaving the country rather than his medical treatment in the first place. But as in Fazlur Rahman’s case the government and judiciary have allowed Nawaz Sharif to leave which is quite generous. It is especially generous when we remember that Imran Khan is facing strong resentment in his party against any leniency for Nawaz Sharif and Imran is risking more quarrelling within PTI than is already there.

Despite all of this Nawaz has been allowed to leave the country for initial four weeks that can be extended if need be. The only condition is that he should not vanish for good like other stalwarts of his party like Ishaq Dar have done. That is why a bond has been demanded high enough to make (relatively) sure he would come back. If he has intention of coming back whatever bond he signs should not cause problems, this coupled with amount of money he and his family members have stashed away inside and money-laundered outside the country.

Well, with Imran Khan hitting Plan “A” for a six out of the political park and Plan “B” already looking to be a non-starter

So there it is, take it or leave it! The ball is now in Nawaz’s court, he is really that ill and he cares for his life he should go, but if he is just pretending or not so much scared for his life he can stay as well. Whatever decision, the government has done its due and responsibility for health and life of Nawaz is now with him. If he decides to stay, he should go back to jail or to hospital, Jati Umra is hardly the place for him to be.

Asif Zardari fell ill no sooner he reached jail. We may remember he had been in a sort of a “jail” on corruption charges from 1997 to 2004. Although incarcerated, he managed to nominally serve in Parliament after being elected to the National Assembly in 1990 and Senate in 1997. In addition, while he was “terribly ill” he enjoyed life in a specially reserved floor for him in Ziauddin Hospital. After his release from “jail” he exiled himself to Dubai and New York, returning only when Benazir Bhutto was assassinated on 27 December 2007 and he saw a chance for his own independent political career. Back in the seat of power he stopped being ill and was soon openly boasting that he had no medical complaints.

Now again he is on judicial remand in the money laundering and Park Lane corruption cases since June 10 this year, this time he has been kept locked up outside Sindh in Adiala jail and without the amenities that he would have received there. When he immediately started complaining about health issues, Zardari was examined by a medical team on August 21 and then admitted to a hospital team. The medical team advised the jail authorities to ensure that he is given medication and receives physiotherapy.

In October he managed to get into hospital again after it was announced his “platelet count” (like Nawaz Sharif’s) had dropped. But he was sent back to jail eventually after his reports turned out to be satisfactory. Talking to a newspaper the former president is reported to have said that God willing, Maulana Fazlur Rehman will achieve his goal of ousting the government. Sure, that would mean he would be out of jail in no time and all his frauds forgotten.

It is such a shame to see the old political guard getting really old and whiny, not ready to face their own deeds and take responsibility. Probably they even don’t have understood that what they consider their due, like tax evasion and transfer of illegal money out of the country is actually corruption. And given their age they wouldn’t learn it any more.

So there is a need for a new generation of politicians who have not been corrupted by the system and who can honestly serve Pakistan without considering their personal gain a gain for the country. It is expected that Nawaz Sharif (or family) will have to come through with the bonds. Zardari will probably have to cool his heels in jail for some more time! Or till he sheds some of the tremendous loot he has accumulated by foul means over the years.

With the Vietnam War going nowhere, a despairing President Lyndon B. Johnson was advised in 1966 by Senator George Aiken of Vermont, “just declare victory and get out.” Well, with Imran Khan hitting Plan “A” for a six out of the political park and Plan “B” already looking to be a non-starter, deciding discretion was the better part of political valour Fazlur Rahman just declared victory and got out of Islamabad.

Ikram Sehgal is Pakistani defence analyst and security expert. The article was first published in Daily Times and has been republished with the author’s permission. The views expressed in this article are the author’s own and do not necessarily reflect Global Village Space’s editorial policy.

Global Turmoil: Ethics offer a way out of the political crisis

It’s about time we chant the slogan “Kashmiri lives matter!”