KSE-100 has gained 25.08% from the low seen on 16th August 2019. Over this period, the situation has completely changed from one where the outlook looked bleak given the uncertainty to now where the sentiment has improved significantly.

The KSE 100 decreased 636 points or 1.67% since the beginning of 2019, according to trading on a contract for difference (CFD) that tracks this benchmark index from Pakistan. However, forecasts seem optimistic as KSE-100 has gained 25.08% from the low seen on 16th August 2019. Over this period, the situation has completely changed from one where the outlook looked bleak given the uncertainty to now where the sentiment has improved significantly.

In the few weeks since the lows of Aug-2019, MSCI Pakistan has ferociously outperformed global equity indices with a staggering 26.7% US$-based price return. In terms of local currency, MSCI Pakistan has been among the top with a 24.0% return. Yes, we have lived to see higher US$-based returns, which only reflects an appreciating PKR.

In a market where foreign investors are usually the saviors, this improvement was observed when foreign investors were net sellers of US$16.36mn. Instead, the equity market found support locally where the three heroes were individuals, other organizations and companies with cumulative buying of US$72.09mn. Talk about change!

The intra-day low of 28,670 seen on 19th August 2019 was a deciding one for the market: any major selling would have resulted in a horrendous drop while investor interest would have jump-started the index. Mercifully, the latter was the case and, as we write this report, the market is trading at a comfortable ~36,670 (+700 points today).

What is interesting is that two major institutional investors – insurance companies and mutual funds – have been net sellers of US$35.29mn and US$23.52mn, respectively during the rally. However, both have exhibited a contrasting shift in their portfolios which we find rather interesting. 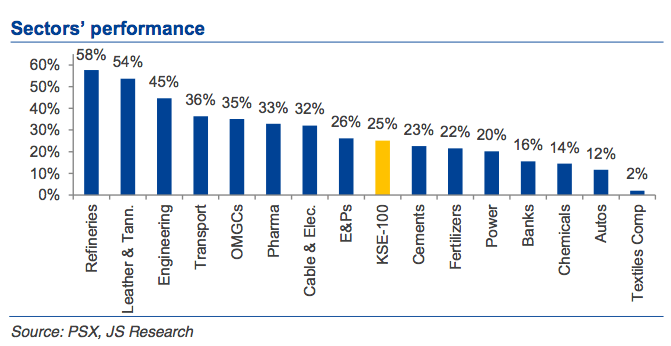 On one hand, insurance companies have cut exposures in cement to move towards safer bets of banks and exploration and productions (E&Ps). On the other hand, mutual funds have built exposures in cements by selling Fertilizers and E&Ps. Furthermore, month-to-date data further highlights the divergent view of the two local institutional investors: insurance companies have remained net sellers of US$6.7mn while mutual funds have turned net buyers of US$2.2mn.

Improved macroeconomic factors and a spike in global crude oil prices sparked a buying spree in the E&P sector. This led to increased investor interest in oil & gas exploration stocks. Meanwhile, the auction of Pakistan Investment Bonds (PIBs) helped investors take a positive view on the interest rate which reflected positively in the stock market.

Research has shown Pakistan’s market volatility is caused by the following factors: news stories in the media, forecasts of the analysts, change in earnings of listed companies, herd behaviour (individual investors following the majority), government policies, political situation, and manipulation by big investors.

A study by Hindawi aimed to identify and investigate the volatility at KSE from a behavioral finance perspective reached the following conclusions. According to investors the political situation is the most important in causing turbulences in the stock market.

The second most important factor identified is the herd behavior among investors that result in over and under-pricing of stocks and the overall market shows a volatile behavior. Furthermore, manipulations by the big investors also play a major role in causing stock market volatility.

Repetitive negativity seems to have left the markets numb; the geopolitical risks, the macroeconomic slowdown and the lot all sound like yesterday’s news. What’s new? Certainly, it is no more that scared, hesitant market that we had gotten to know; investors are now willing to take a longer-term view beyond FY20 with the hope that things will get better. And they seemingly have; macroeconomic indicators must have passed the bare minimum threshold as is evident from the strong bull rally.

2QFY20 started off strong with news flows reporting tax collection of Rs960bn during 1QFY20, ~90% of the set target. We still await the official fiscal accounts from the Ministry of Finance. Nevertheless, one should accede that this is not less than a miracle under the economic conditions. Furthermore, the vacuum that had formed between the government and the market was somewhat addressed as government representatives and the army chief himself held meetings with the business community, creating a much needed feel-good factor.

To get a political recap of selected economic achievements one needs look no further than the press conference by the Minister for Economic Affairs, Mr. Hammad Azhar, last week. Nevertheless, the successful completion of the quarterly IMF review, and positive statements from the IMF Middle East and Central Asia’s director, are testament to improving economic conditions where the market’s fears of higher GST and a mini-budget have been put to rest for now. Furthermore, the Fund has revised down the FY20 inflation forecast from 13.0% to 11.8%.

It seems to be betting that obstacles such the on-going Azadi March, the pending FATF review and the criticism of slowdown in CPEC-related activity will all eventually be overcome

In the short term, the market does not seem severely concerned about current developments. It seems to be betting that obstacles such the on-going Azadi March, the pending FATF review and the criticism of slowdown in CPEC-related activity will all eventually be overcome. To top it all off the grand opening of the Kartarpur corridor is a diplomatic masterstroke. Nevertheless, two critical factors that demand attention are the stability of the Rupee-Dollar parity and the revenue collection.

The USDPKR increased 0.4700 or 0.30% to 155.4000 on Thursday November 14 from 154.9300 in the previous trading session. Historically, the Pakistan Rupee reached an all time high of 163.75 in June of 2019.  The Pakistan Rupee is expected to trade at 156.02 by the end of this quarter, according to Trading Economics global macro models and analysts expectations

To conclude with an outlook, there are two sides to the story. One side suggests that, with current market levels, all recent triggers have come and passed. The first IMF review has finally concluded and the market has also broadly accepted the FATF outlook, whether good or bad. In the absence of drivers in the near term, it is naturally time for a breather. The other side advocates that the market sentiment has taken a U-turn following the resilient rally. While a correction at these levels cannot be ruled out, it may be safe to say that it would be a mild one at best. Following this correction, the general sentiment suggests that the next target may lie within the 40-42k range. We should highlight that for FY20, policy rate cuts remain the biggest story. Even though all indicators point towards a cut in the policy rate sooner or later, we yearn to see the State Bank ink the decision.

Previous articleThings Can’t Go Like This Any Longer: PM Khan Unhappy with Pakistan’s Progress Rate
Next articleImposition of IMO-2020 standards: Pakistan should brace for impact

Babar snatches another record from Kohli

US hypersonic missile to counter Russia fails during test