PM Narendra Modi who has come under severe criticism for his inability to efficiently manage Covid-19, has now reached out to the public through a letter addressed to the nation. 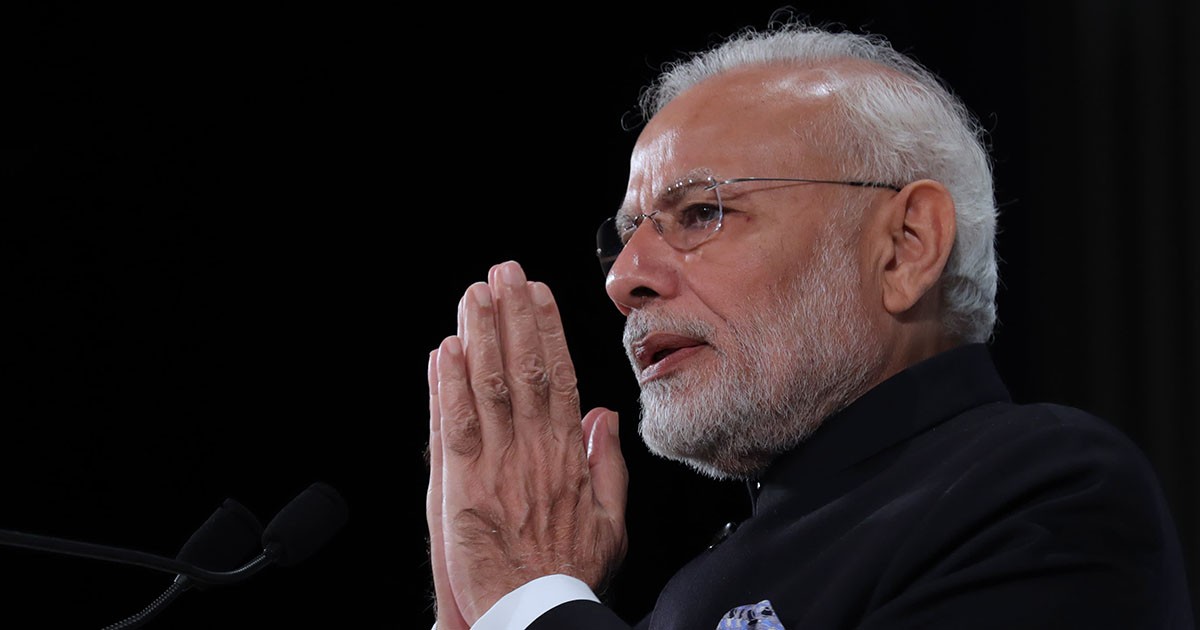 Prime Minister Narendra Modi who has come under severe criticism for his inability to efficiently manage the outbreak of Covid-19 in India, is now trying to reach out to the public to gain support for his actions amid the crisis.

The recent series of strikes and protests that erupted in the disputed Kashmir valley just before the strict lockdown imposed across India, and the developing border dispute with China in Ladakh are also believed to be the reasons behind this public outreach.

In a letter addressed to the nation PM Modi writes:

This day last year began a golden chapter in the history of Indian democracy. It was after several decades that the people of the country voted back a full-term government with a full majority.

Once again, I bow to the 130 crore people of India and the democratic ethos of our nation. Your affection, goodwill and active cooperation have given new energy, and inspiration.

During normal times, I would have been in your midst. However, the present circumstances do not permit that. That is why I seek your blessings through this letter.

Back in 2014, the people of the country voted for a substantive transformation. In the last five years, the nation saw how the administrative apparatus broke itself free of the status quo and from the swamp of corruption as well as misgovernance. True to the spirit of “Antyodaya”, the lives of millions have been transformed. From 2014 to 2019, India’s stature rose significantly. The dignity of the poor was enhanced. The nation achieved financial inclusion, free gas and electricity connections, total sanitation coverage, and made progress towards ensuring “Housing for All”.

India demonstrated its mettle through the surgical strike and airstrike. At the same time, decades-old demands such as OROP, One Nation One Tax and better MSP for farmers were fulfilled.

In 2019, the people of India voted not merely for continuity but also with a dream — of taking India to new heights. A dream of making India a global leader.

Today, 130 crore people feel involved and integrated in the development trajectory of the nation. The light of Jan Shakti and Rashtra Shakti has ignited the nation. Powered by the mantra of Sabka Saath, Sabka Vikas, Sabka Vishwas, India is marching forward in all spheres.

My fellow Indians, in the last one year, some of the decisions were widely discussed and remain etched in public discourse.

The decision on Article 370 furthered the spirit of national unity and integration. The Ram Mandir judgment, delivered unanimously by the Supreme Court of India, brought an amicable end to a debate persisting for centuries. The barbaric practice of Triple Talaq has been confined to the dustbin of history. The amendment to the Citizenship Act was an expression of India’s compassion and spirit of inclusiveness.

But there have been many other decisions that have added momentum to the nation’s development trajectory.

“…I believe in you, your strength and your abilities even more than I believe in myself. The source of strength for my resolve is you, your support, blessings and affection.” ⁦@PMOIndia⁩
⁦@narendramodi⁩ writes a letter to the nation. https://t.co/OfQ5N5iXsc

The creation of the post of the Chief of Defence Staff was a long pending reform that has improved coordination among the armed forces. At the same time, India has stepped up preparations for Mission Gaganyaan.

Empowering the poor, farmers, women and youth has remained our priority.

PM Kisan Samman Nidhi now includes all farmers. In just one year, more than Rs 72,000 crore has been deposited in the accounts of over 9 crore 50 lakh farmers. The Jal Jeevan Mission will ensure supply of potable drinking water through piped connections to over 15 crore rural households.

Prime Minister Narendra Modi during a review meeting with the officials after his aerial survey of the Amphan Cyclone affected areas in the state, at Basirhat in West Bengal. (PTI)

A huge campaign of free vaccination is being conducted for better health of our 50 crore livestock.

For the first time in our country’s history, farmers, farm labourers, small shopkeepers and workers in the unorganised sector are assured the provision of regular monthly pension of Rs 3,000 after the age of 60.

Besides the facility of availing bank loans, a separate department has also been created for fishermen. Several other decisions have been taken to strengthen the fisheries sector. This will boost the blue economy.

Similarly, it has been decided to constitute a Vyapari Kalyan Board for the timely resolution of the problems of traders. A higher quantum of financial assistance is being provided to more than seven crore women attached to self-help groups. Recently, loans without guarantee for self-help groups have been doubled to 20 lakh from 10 lakh.

Keeping in mind the education of tribal children, we have begun the construction of more than 400 new Ekalavya Model Residential Schools.

Several people-friendly laws have been ushered in during the last year. Our Parliament has broken the decades-old record in terms of productivity. As a result, whether it be the Consumer Protection Act, the amendment to Chit Fund Law or laws to provide more protection to women, children and Divyang, their passage in the Parliament was expedited.

As a result of the policies and decisions of the government, the rural-urban gap is shrinking. For the first time, the number of rural Indians using internet is 10 per cent more than the number of urban Indians.

The list of such historic actions and decisions taken in national interest would be too long to detail in this letter. But I must say that every day of this year, my government has worked round the clock with full vigour, taking and implementing these decisions.

My fellow Indians, as we were moving ahead at fast pace in the fulfilment of hopes and aspirations of our countrymen, the coronavirus global pandemic engulfed our country as well. While on the one hand are powers with great economic resources and state-of-the-art healthcare systems, on the other hand is our country besieged with problems amidst a vast population and limited resources.

Many feared that India will become a problem for the world when corona hits it. But today, through sheer confidence and resilience, you have transformed the way the world looks at us. You have proven that the collective strength and potential of Indians is unparalleled, compared even to the powerful and prosperous countries. Be it clapping and lighting a lamp to the honouring of Corona Warriors by India’s armed forces, janata curfew or by faithful adherence to rules during the nationwide lockdown, on every occasion you have shown that Ek Bharat is the guarantee for Shrestha Bharat.

In a crisis of this magnitude, it can certainly not be claimed that no one suffered any inconvenience or discomfort. Our labourers, migrant workers, artisans and craftsmen in small-scale industries, hawkers and such fellow countrymen have undergone tremendous suffering.

However, we have to take care to ensure that the inconveniences we are facing do not turn into disasters. Hence, it is very important for every Indian to follow all rules and guidelines. We have displayed patience so far and we should continue to do so. This is one of the important reasons for India being safer and in a better state than many other countries. This is a long battle but we have started traversing the path to victory, and victory is our collective resolve.

In the last few days, a super cyclone has wreaked havoc in parts of West Bengal and Odisha. Here, too, the resilience of the people of these states is noteworthy. Their courage inspires the people of India.

Dear friends, at such a time, there is also a widespread debate on how the economies of various countries, including India’s, will recover. However, given the way India has surprised the world with its unity and resolve in the fight against coronavirus, there is a firm belief that we will also set an example in economic revival. In the economic domain, through their strength, 130 crore Indians can not only surprise the world but also inspire it.

It is the need of the hour that we must become self-reliant. We have to move forward based on our own abilities, in our own way, and there is only one way to do it —Aatmanirbhar Bharat or Self-reliant India.

The recent Rs 20 lakh crore package given for Aatmanirbhar Bharat Abhiyan is a major step in this direction. This initiative will usher in a new era of opportunities for every Indian, be it our farmers, workers, small entrepreneurs or youth associated with start ups. The fragrance of Indian soil along with the sweat, hard work and talent of our workers will create products that will reduce India’s dependence on imports and will move towards self-reliance.

Dear friends, in this journey of the last six years, you have continuously showered me with love and blessings.

It is the strength of your blessings that has made the nation take historic decisions and progress rapidly in the last one year. However, I am also aware that there is a lot that needs to be done. There are many challenges and problems that our country faces. I am working day and night. There could be deficiencies in me but there is nothing that our country lacks. So, I believe in you, your strength and your abilities even more than I believe in myself.

The source of strength for my resolve is you, your support, blessings and affection.

Due to the global pandemic this is certainly a time of crisis, but for us Indians this is also a time for a firm resolve.

We must always remember that the present and future of 130 crore will never be dictated by an adversity.

We will decide our present and our future. We will move ahead on the path of progress and victory will be ours.

It is said that Kritam me dakshine haste/jayo me svya aahita. This means, if we have action and duty on one hand, then success is assured in the other hand.

With prayers for our country’s success, I bow to you once again.

My heartiest wishes to you and your families.

The writer is prime minister of India

This article first appeared in the print edition on May 30 under the title “You, The People”.

Pakistan’s unnecessary silence: Is the sovereignty under serious threat?