US Secretary of State Mike Pompeo said Washington's support for Ukraine was unwavering during a delicate visit Friday to the country at the heart of the US impeachment process. Secretary Pompeo's untimely visit to Kyiv amid Trump impeachment trial has raised numerous questions - ranging from America's policy towards Ukraine to the meddling of President Trump's personal interests in US foreign policy. 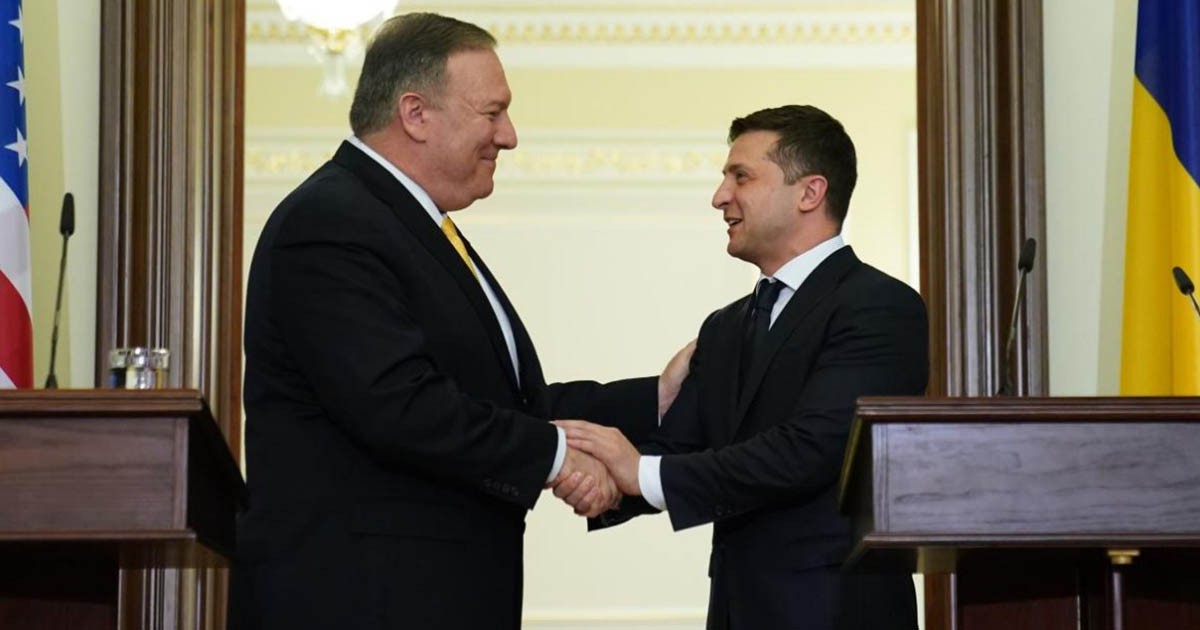 US Secretary of State Mike Pompeo said Washington’s support for Ukraine was unwavering during a delicate visit Friday to the country at the heart of the US impeachment process.

Secretary Pompeo’s untimely visit to Kyiv amid Trump impeachment trial has raised numerous questions – ranging from America’s policy towards Ukraine to the meddling of President Trump’s personal interests in US foreign policy.

It is pertinent to remember that Ukraine and its President, Vlodymyr Zelensky, are at the heart of the impeachment trial against Trump.

Ukraine is walking a careful line in its relations with the United States — keen to maintain American backing in the war but wary of being further entangled in US domestic politics.

Pompeo, last week: "Do you think Americans care about Ukraine?" (with the f-word thrown in)

Pompeo, today, in Kyiv: "The United States sees that the Ukrainian struggle for freedom, democracy and prosperity is a valiant one."@ewong https://t.co/aa5YbKytlI— Peter Baker (@peterbakernyt) January 31, 2020

Pompeo is the most senior US official to visit Ukraine since the start of the impeachment process against US President Donald Trump, who is accused of withholding military aid to push Kiev into investigating his Democratic rival Joe Biden.

Pompeo said there could be no doubts about Washington’s support for Ukraine, calling it “a bulwark between freedom and authoritarianism in eastern Europe”.

“The United States sees that the Ukrainian struggle for freedom, democracy and prosperity is a valiant one. Our commitment to support it will not waver,” he said at a news conference with Zelensky.

Zelensky, who allegedly faced the pressure from Trump in a July 25 phone call, called on Washington to “be more actively involved in the peace process in eastern Ukraine” and to appoint a special representative on the conflict.

“I do not believe that our warm and important relations have been influenced by the question of the impeachment,” he said.

Zelensky said he was “ready to go tomorrow” to meet with Trump in Washington. Pompeo said no date had been set yet for a White House meeting.

A senior State Department official told reporters that talks between Pompeo and Zelensky were “very focused on investment and infrastructure”.

“There was no talk of impeachment or any investigations,” the official said.

Speaking on condition of anonymity, a Ukrainian official told AFP that the issue of Biden was not brought up during the meeting.

Washington has been an important backer of Ukraine in its conflict with the separatists in the country’s east, providing both military aid and diplomatic support.

That support is at the centre of the impeachment process, with Trump accused of withholding $400 million in assistance to demand dirt on Biden, whose son was on the board of a Ukrainian company.

A Senate trial of Trump is under way in Washington, but the Republican majority in the US upper house all but guarantees an acquittal. A vote to acquit could come as soon as Friday.

Pompeo is himself under pressure over Ukraine. He was among senior officials who listened in on the phone call with Zelensky and has been accused of not doing enough to defend Marie Yovanovitch, the former US envoy to Kiev who Trump removed last year.

He visited Kiev’s golden-domed Saint Michael’s Cathedral — torn down by the Soviet Union and rebuilt after Ukraine’s independence — and a memorial wall with photographs of soldiers killed in the conflict in the country’s east that broke out in 2014.

The US Secretary of State also met with Ukrainian Defence Minister Andriy Zagorodnyuk, who thanked the United States for its assistance in reforming the ex-Soviet country’s armed forces.

BREAKING: Pompeo said after meeting w/ Zelensky in Kyiv that US supports Ukraine against Russian aggression. But he said there are no plans for Zelensky to visit Trump at the White House — which Zelensky says he wants. It’d be an important signal to Putin. https://t.co/g9P4OUGcV8

Washington’s support for Kiev has included not only military assistance but diplomatic backing, including the imposition of US sanctions against Russia following its 2014 annexation of Crimea.

Zelensky, a comedian with no previous political experience who won a landslide election victory last year, has made ending the conflict a key plank of his presidency.

The fighting with separatists in two mainly Russian-speaking breakaway regions has left more than 13,000 dead and crippled Ukraine’s economy.

Russia is accused of backing the separatists and seeking to undermine Ukraine’s efforts to develop closer ties with the West.

After Kiev, Pompeo was due to visit three more countries of the former Soviet Union, seeking to extend US sway in Russia’s traditional sphere of influence.

He was to meet with senior officials including President Alexander Lukashenko in the Belarusian capital Minsk on Saturday, then travel on to Kazakhstan and Uzbekistan in Central Asia.