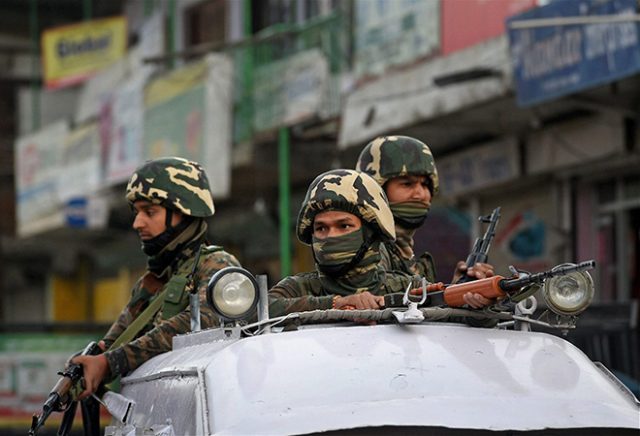 14 February’s now-famous and destructive JeM-claimed Fidayeen attack on an Indian convoy killed 49 Indian troops in Pulwama, Kashmir and caused shockwaves across India. 4 Indian army personnel including a major along with one policeman were also killed in a clash with Kashmiri fighters in Pulwama two days after the event with 3 fighters embracing martyrdom. Even a day prior to the Fidayeen attack, 2 Indian troops and a fighter had been killed in what has been a trend of Kashmiri youths increasingly taking up arms against the state since 2016 when Burhan Wani was martyred.

The anger surrounding Indian discussions to scrap Article 35-A, seen by Kashmiris as an attempt to pave the way to demographic change, has also been palpable. In India, Kashmiri traders and shopkeepers have been attacked by mobs and Kashmiri students been similarly threatened to abandon their studies and leave their campuses. Even the façade of considering the Kashmiri people an ‘integral part of India’ is not maintained, with frequent condemnations of the Kashmiris to be seen across the Indian media and social media.

The Pulwama blast, which saw the usage of a tactic by the Kashmiri fighters not used in a long time, is yet another important point in the history of Kashmir and more so for the impact, it has had on India.

India is, more than ever before, at war with the people of occupied Kashmir. Overall, the revived Kashmiri freedom struggle– which Burhan’s martyrdom amplified and Indian atrocities ignited– is being complemented by the Indian regime and its people set their own communal fault lines on fire even further.

Celebrities and politicians alike tweet ridiculous advocacy for war with Pakistan, the news channels remain as comically hawkish (here’s one of India’s prime outlets publishing an article titled ‘Pakistan must be destroyed!’) as ever. A professor from the prestigious Jawaharlal Nehru University has called for 40 random Kashmiris to be executed. Kashmiris in India are being arrested for ‘anti-national’ posts on the internet.

These Indian fault lines, to make it worse, run deep in India’s history and societal fabric and there is no sign of serious and potent work being done to stitch them back up. The Nellie Massacre of 1983, the anti-Sikh riots of 1984, the Bombay Riots of 1992 and the Gujarat Riots of 2002 were all incidents where hundreds or thousands of a minority (especially Muslims) were murdered, with complicity by state elements or mainstream political parties.

Despite no such incidents ever having happened to religious minorities in Pakistan, India’s intelligentsia prefers to woefully speculate about how India is ‘turning into a Hindu Pakistan’ and use similar other lingo and means to try and redeem the ‘world’s largest secular democracy’ canard amidst the turbulent communalism of today’s India.

The post-Wani martyrdom crescendo, augmented by the fury around the issue of 35-A, had already resulted in a strengthening Kashmiri freedom struggle. The Pulwama blast, which saw the usage of a tactic by the Kashmiri fighters not used in a long time, is yet another important point in the history of Kashmir and more so for the impact, it has had on India. As Riyaaz Naikoo, commander of the Hizbul Mujahideen group has put it, Fidayeen attacks may become more common as a testament to Kashmiris will die rather than surrender.

India’s descent into tactless aggression on behalf of its public, media and leadership alike at a time when it needs to carefully manage its well-planned but risk-ridden path to Asian hegemony presents an opportunity for Pakistan.

Post-Pulwama blast, each Kashmiri martyrdom and subsequent funeral with attendance among the thousands waving Pakistani flags and chanting Azadi will only consolidate Kashmiri spirit. On the other hand, each Indian soldier killed by the Kashmiri resistance following the Pulwama Fidayeen attack will produce incrementally rising waves of irrational anger among India. This anger will be underscored by a brand of hyper-nationalistic jingoism India steadily developed for itself over the last 2 decades.

India’s nationalism is more self-damaging and deeply entrenched than people give it credit for. Its progression in the 2000s coincided with an Indian economic boom and an IT sector expansion that’s seen the Indian media turn into a burgeoning weapon of public opinion the Indian Hindutva establishment has wielded successfully to mold Indian society and opinion to its liking.

Despite having more extremely poor people than any other country, India’s consumerism oriented-upper and middle class mixed together with the large cyber propaganda teams maintained by Hindutva parties means that enlightenment and counter-attack against the Hindutva nationalist surge aren’t coming anytime soon. India has internet users in the hundreds of millions, and the Hindutva groupthink has been cemented by India’s vast cyber presence.

India’s overly nationalistic rhetoric does not seem to be losing its appeal to the masses. The Indian media frequently crossing the lines of socially acceptable content and behaviour in its broadcasts is not by mistake, either; there are too many among India’s populace to whom such content appeals.

That India’s erratic behavior is encouraged by its most powerful stakeholders; means the spiral will continue. The Indian nation across the board seems like it is going mad and the Pakistani leadership, media, and blogosphere remain oddly calm and collected in comparison.

Either that or the Pakistani nation and leadership remain as asleep when it comes to the major issues as they have been for many years now. The PTI government shows no signs of focusing on anything other than the economy, finance and development, and Pakistani leaders do not so much talk about the global and regional ongoings with regard to wars, proxy wars, alliances and blocs, the clashes of ideologies and so on. Such have shaped the destinies of peoples and state for millennia and to ignore them is fatally irresponsible.

India’s plans for hegemony entail much danger for Pakistan if it does not develop a response, for which there exist ample opportunities; the need is to identify.

Pakistan boasts a generally directionless foreign policy, epitomized by empty, vapid, naive trademarks such as ‘Afghan-led, Afghan-owned peace process’ and the policy of extending olive-branches to one-dimensionally hostile states such as India or the Indo-US backed Kabul regime.

India, meanwhile, follows a well-planned and long-in-the-works roadmap for Asian hegemony as exemplified by its North-South Trade Corridor, its huge investments in tangible infrastructure projects in a not-ideal-for-investment state like Afghanistan and its aggressive rhetoric toward Pakistan. The latter is explainable, of course, by India’s strategic interest in becoming a dominant influence in Afghan politics and economy and to continue using Afghan territory against Pakistan.

India’s descent into tactless aggression on behalf of its public, media and leadership alike at a time when it needs to carefully manage its well-planned but risk-ridden path to Asian hegemony presents an opportunity for Pakistan.

India’s plans for hegemony entail much danger for Pakistan if it does not develop a response, for which there exist ample opportunities; the need is to identify.

Agha Hussain is a research analyst and blogger at the Institute of Regional Studies (IRS), Islamabad. The views expressed in this article are author’s own and do not necessarily reflect the editorial policy of Global Village Space.

India agrees to hold talks with Kashmiri leaders. Why?

Aamir Liaqat to play Burhan Wani in his debut film