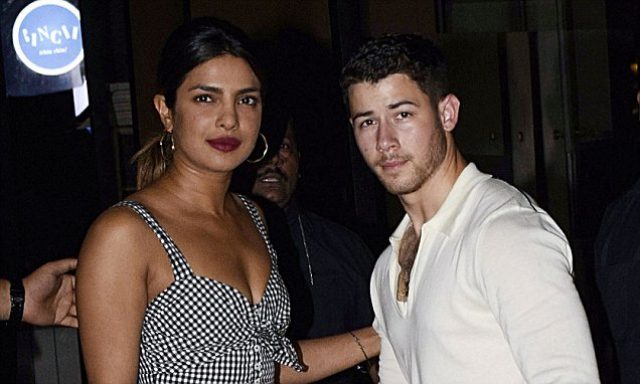 Priyanka Chopra was recently spotted celebrating her birthday with rumored beau Nick Jonas in London. The pictures circulating on social media shows the celebrities were spotted outside a lavish restaurant in London.

Nick hosted an intimate dinner for the Bollywood actress Priyanka Chopra at Chiltern Firehouse in London- a hot spot for the celebs. The actress was pictured wearing a black top and polka-dot palazzos. Jonas also shared a picture on his Instagram wishing Chopra ‘happy birthday’.

Priyanka Chopra partied on Monday night with Nick Jonas’s siblings including Kevin Jonas, Joe Jonas and his fiancé Sophie Turner. The couple was seen walking out of the restaurant hand-in-hand and left separately.

Priyanka Chopra met Jonas’s family at his cousin’s wedding. Nick Jonas reportedly traveled to India to meet Chopra’s family. They went on to spend their vacations together in Goa, India. Priyanka Chopra was also seen celebrating the 4th July with Nick Jonas and his close family friends.

Some sources claimed the couple intends to get married as well, however, Priyanka Chopra’s mother Madhu Chopra in her media talk turned down all the news of their marriage. She asked if the media was serious and if yes then they will get serious too.

The couple, however, has been confronting trolls on social media for their alleged relationship because of the huge age difference between them. Priyanka Chopra has just turned 36 while Nick Jonas is 25.

Nick Jonas finally put to rest all the trolls in his recent social media post. Only time will tell if the couple will tie the knot in the future?

Erdogan in Britain for talks with ‘valuable’ ally