Thousands of Jordanians on Friday rallied in the capital Amman against the U.S.’ so-called “deal of the century” Mideast plan. The protesters rallied for Palestine and chanted slogans calling for the protection of Jerusalem’s al-Aqsa Mosque and burned the Israeli flag. 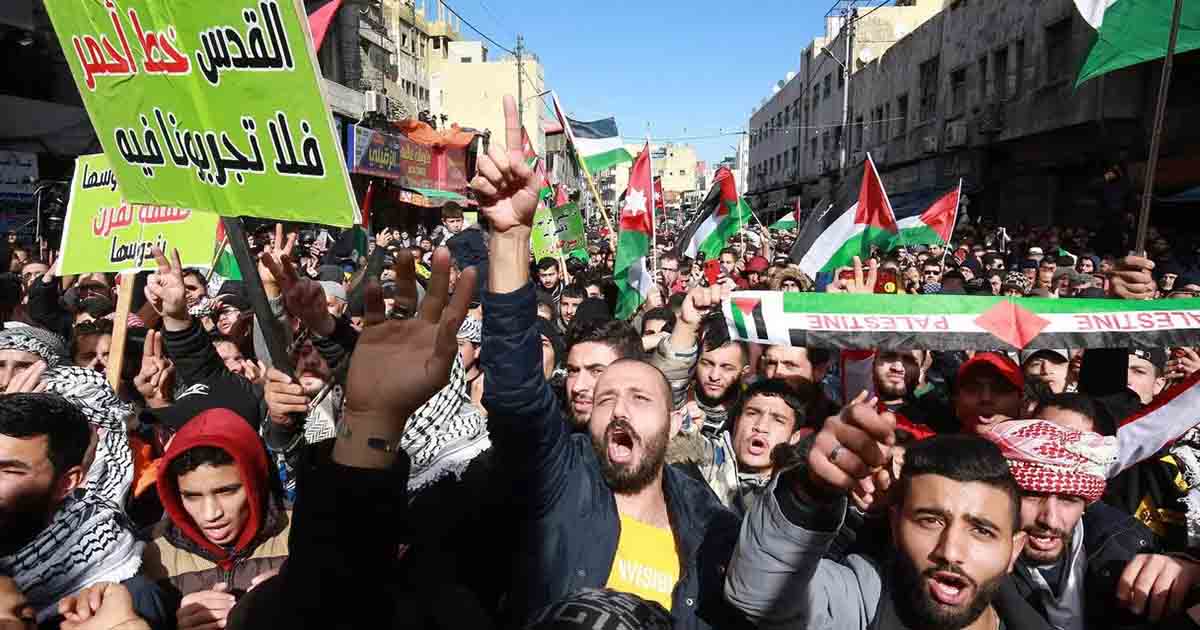 Thousands of Jordanians protested Friday in the capital Amman against US President Donald Trump’s Middle East peace plan and set fire to the Israeli flag. Trump’s plan has been severely criticized for altogether removing Palestinians from the equation of solving the conflict.

International Affairs analysts have opined that the White House initiative is a ‘piece of political malware’, masquerading as a credible diplomatic initiative; the apparent goal of Trump’s so-called ‘deal of the century’ does not seem to be peace but rather an attempt at permanent normalization of Israel’s military rule over millions of Palestinians.

Chanting “Death to Israel”, about 3,000 people took part in the demonstration, which started in front of the city’s Al-Husseini Mosque, amid a heavy security presence, an AFP photographer said.

Palestinian protesters clash with Israeli forces in the village of Nabi Saleh, the occupied West Bank, in protest of the US peace plan, the "deal of the century", today. pic.twitter.com/QbGfLV0yL1

Protesters chanted, “Listen, damn Trump, Palestine is not for sale” and “The Jordanian and Palestinian people are one, not two”.

Key US ally Jordan is one of two Arab countries along with Egypt to have a peace treaty with Israel, and more than half of the country’s population is of Palestinian origin.

Almost 300 people demonstrated in front of the US Embassy in Amman, calling on Arab and Muslim countries to support the Palestinians and the “resistance” against the Jewish state.

Hundreds gathered in similar protests in the cities of Irbid in the country’s north, in Karak, south of Amman, and in Salt, northwest of the capital.

He said Jordan will continue to back the Palestinian people in their effort to set up an independent state with east Jerusalem as its capital, a statement added.

Arab Israelis protest US peace plan proposal to include their towns in Palestine https://t.co/1NW6K7HbSa

The US plan released on Tuesday was seen as heavily biased towards Israel and was angrily rejected by Palestinians, with one of the key bones of contention being its classification of Jerusalem as Israel’s “undivided capital”.

Palestinians have long seen the city’s eastern sector, which was occupied by Israel during the 1967 Six-Day War, as the capital of their future state.

Jordan’s foreign ministry said Tuesday that an independent Palestinian state based on pre-1967 borders was “the only path to a comprehensive and lasting peace”.

The kingdom is the guardian of Islamic holy sites in Jerusalem.

Previous articlePIA Performing Better than Ever Before: Losses Dip by 18 Billion
Next articleUK-EU trade talk arise from the ashes of Brexit

17 September 2021
Previous articlePIA Performing Better than Ever Before: Losses Dip by 18 Billion
Next articleUK-EU trade talk arise from the ashes of Brexit

How Donald Trump stole Facebook data to win his election