Trump’s Middle East Plan: The road to peace or chaos?

President Trump has boasted that his Middle East plan will find support but most experts believe its unabashed backing of Israel and tough conditions for the creation of a Palestinian state mean it is doomed to fail. The Israel-Palestine conflict has been going on for seven decades. Trump's one-sided plan will probably crush any hopes that the Palestinians have in a diplomatic solution, with ominous implications for all countries in the volatile Middle East—and, quite possibly, further exacerbate the already abysmal situation. 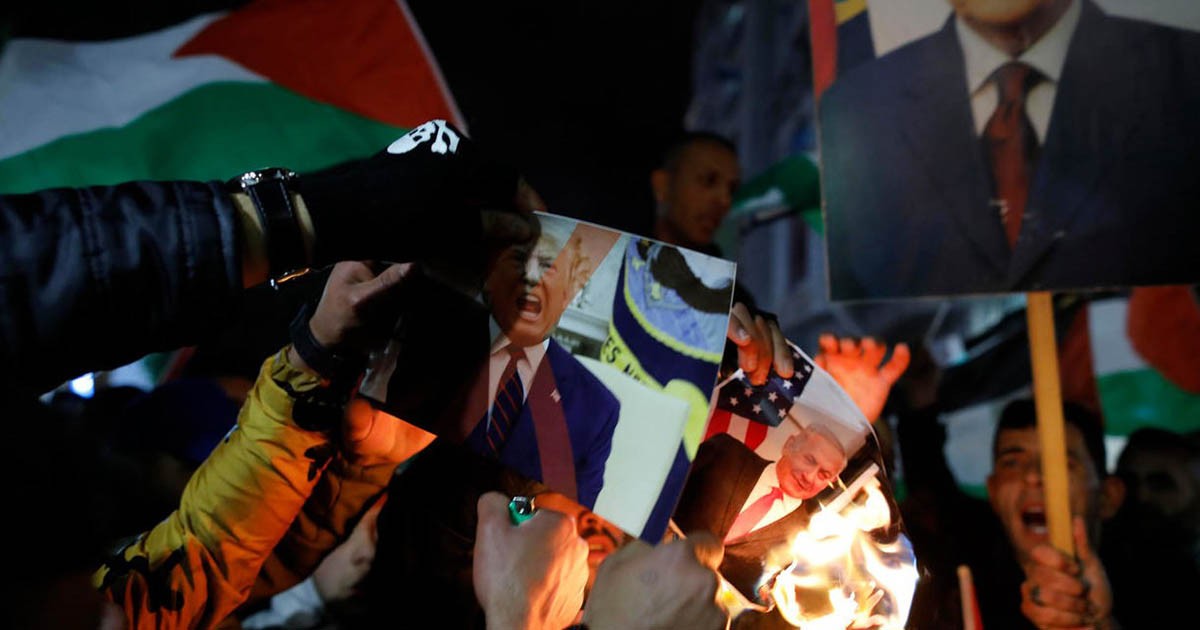 Three years after he said that peace in the Middle East was “not as difficult as people have thought,” President Donald Trump unveiled a lopsided plan that gives Israel much of what it has long sought and imposes daunting requirements on the Palestinians before negotiations can even begin.

President Donald Trump has boasted that his Middle East plan will find support but most experts believe its unabashed backing of Israel and tough conditions for the creation of a Palestinian state mean it is doomed to fail.

“It is a non-starter,” said Steven Cook, a senior fellow at the Council on Foreign Relations.

“The Palestinians have rejected it out of hand as have Israeli settlers who are opposed to any form of Palestinian sovereignty,” he said.

His erratic and unilateral decision in 2018 to open the US Embassy to Israel in Jerusalem was lambasted world wide and gave a clear indication to all concerned parties that any future peace solution proposed by Trump would be unfair to the Palestinians.

Palestinian president Mahmud Abbas has no intention to negotiate over the plan and Israeli Prime Minister Benjamin Netanyahu, who joined Trump for the announcement at the White House on Tuesday, appears to be counting on Abbas to reject it, Cook said.

#NSTworld: “The Palestinians have rejected it out of hand as have Israeli settlers who are opposed to any form of Palestinian sovereignty.”https://t.co/gGXW6Im6cK

The White House coordinated with Israel on the plan which gives the green light to Netanyahu to annex much of the West Bank — a path he has already indicated his cabinet will soon take.

Read More: TRUMP UNVEILS THE “GIVEAWAY OF THE CENTURY” ON MIDDLE EAST PEACE

“It is meant to help Prime Minister Netanyahu survive his current political and legal struggles as well as to shore up support for President Trump among pro-Israel voters in his re-election campaign,” said Michele Dunne, a former State Department specialist on the Middle East now at the Carnegie Endowment for International Peace.

“There is no sign whatsoever that the plan will lead to negotiations,” she said.

The Trump administration spent three years working on the 80-page plan. The Palestinian leadership has boycotted Trump’s efforts, considering him biased after major steps such as recognizing disputed Jerusalem as Israel’s capital.

Read more: Israel-Palestine: Deal of the century or the devil’s deal?

But the capital would be in eastern areas such as the adjacent Palestinian village of Abu Dis, with Israel exerting sovereignty throughout the holy city.

The plan, spearheaded by Trump’s son-in-law and adviser Jared Kushner, freezes Israeli settlements for four years in areas eyed for a Palestinian state and would connect the West Bank and Gaza through a corridor with high-speed transportation, one of a slew of economic development promises.

“At a tactical level there are some good ideas, but without the promise of statehood for the Palestinians, they are meaningless,” Cook said.

Robert Satloff of the Washington Institute for Near East Policy welcomed what he called a dose of “realism” in the long intractable conflict.

“But they took those and other principles and stretched them beyond all recognition. Israeli security control of Jordan Valley became full sovereignty; not uprooting hundreds of thousands of settlers became not uprooting even one settler.”

Dunne said the fundamental headline of the plan is that it sets Israel’s eastern border all the way alongside Jordan.

“All the rest is details. Whatever the plan gives to Palestinians is provisional, conditional and long-term — in other words, probably will not happen,” she said.

The White House “vision” said that Israel would not implement it until it approves of the rulers of Gaza, the densely populated coastal strip led by the Islamist militant movement Hamas.

Read more: How the world is reacting to Trump’s Mideast plan

“Unless and until Hamas is removed or disarms/renounces violence/recognizes Israel as a nation-state of the Jewish people, the Palestinians get zero from the plan. Hamas has veto power,” tweeted Henry Rome, an analyst at the Eurasia Group risk consultancy.

For some observers, the fundamental goal of the Trump plan is to change in the long-term the parameters of a settlement to be more favorable to Israel.

Israeli annexation in the West Bank would present a fait accompli to the Palestinians in the guise of a peace plan.

“However weak the Palestinian people or leadership is, they always have the ability to say no, as they will do now,” Dunne said.

“The real question is where this will push the Palestinian movement. Whether intended or not, this plan seems likely to hasten the day when it changes from a struggle for an independent state to a South Africa-like struggle for rights,” she said.

Despite the Palestinian rejection, the Trump plan enjoyed an upbeat reception from several US allies in the Arab world, which have found common cause with Trump and Netanyahu in their opposition to Iran.

The ambassadors of Bahrain, Oman and the United Arab Emirates — none of which recognize Israel — attended the announcement by Trump and Netanyahu.

Egypt, the first Arab state to make peace with Israel, encouraged the Palestinians to “undertake a careful and thorough examination” of the proposal.

“Palestinians will be tempted to reject plan outright but should resist temptation and agree to direct negotiations where they can advocate as they want,” tweeted Richard Haass, president of the Council on Foreign Relations.

“Total rejection could undermine what modest hopes for two-state outcome exist and pave way to annexations.”

Trump’s one-sided plan will probably crush any hopes that the Palestinians have in a diplomatic solution, with ominous implications for all countries in the volatile Middle East—and, quite possibly, further exacerbate the already abysmal situation.

Confederate names being removed from US military bases: Republicans and Democrats clash

ICJ’s ruling on US sanctions against Iran coming this week

From Mao to Trump: China’s economic roller-coaster since 1949