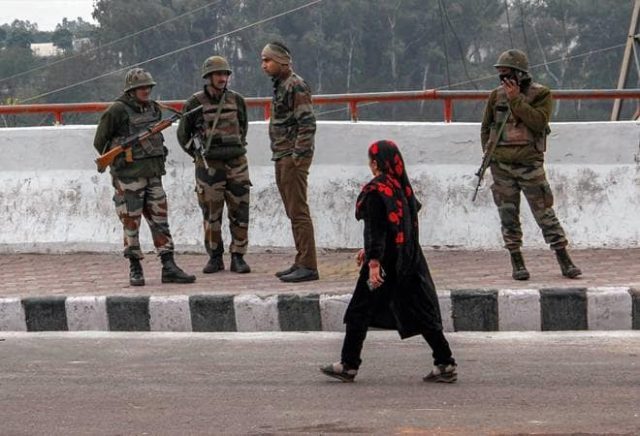 Within hours of the deadly Pulwama Attack that killed 44 Indian paramilitary soldiers, Indian Prime Minister Modi and his cabinet began leveling severe accusations at Pakistan and threatening to provide a “befitting response” to this terror episode. On Friday, Pakistan countered New Delhi’s propaganda with a diplomatic offensive by reaching out to the ambassadors of the P-5 Nations.

Tehmina Janjua, the foreign secretary, briefed the ambassadors of the five permanent members of the UNSC-US, France, China, Russia, and Britain at the Foreign Ministry, and condemned the Indian allegations on Pakistan. As per a statement issued by the Foreign Office, Janjua shed light on the Indian tactics of leveling immediate allegations on Pakistan without providing any evidence. She further argued that Pakistan has always kept its dealings with New Delhi “constructive”, the Indian accusations are aimed at triggering tensions and will prove to be “counterproductive”.

Since Thursday when the attack took place, Indian newspapers, media outlets, and western media outlets have published multiple stories that link Pakistan to Jaish-e-Mohammadi and claim that Adil Ahmad Dar, the alleged perpetrator of the attack was “indoctrinated in Pakistan”.

Analysts have deduced that the timing of the attack conveniently coincides with the upcoming Indian election, and Modi-led government and ruling Bharatiya Janata Party (BJP) are likely to stir up communal violence against Indian Muslims and Kashmir to strengthen the fervor of Hindu nationalism and use “war hysteria” and anti-Pakistan antics to win over public opinion.

On Friday, Indian Premier Narendra Modi issued a statement that the perpetrators of the Pulwama attack will be given a “strong response”, followed by New Delhi’s withdrawal of Pakistan’s trade status as the Most Favored Nation (MFN).

Indian media outlets report that Islamabad’s MFN status was withdrawn at a Cabinet Committee on Security (CCS) meeting, headed by PM Modi. The committee also decided to take “all possible steps” required to completely “isolate” Pakistan. While Speaking to Usman Javed on 7News, Zaid Hamid, senior national security analyst, commented on the Pulwama attack and labeled it as a “false flag operated conducted by RAW”.

“It was understandable; we were expecting India to stage such a false flag operation. On multiple occasions, the BJP leadership has stated that election cannot be won solely on the basis of economic progress, but in fact, it is won over by emotions, hence, it is important to rally the Indian public behind Modi by inciting communal violence and defaming Pakistan”.

Senior security analyst Zaid Hamid termed the Pulwama attack as a “classic false flag operation”, and went on to say that there is no evidence to link Pakistan to this attack. “The only evidence put forward to justify Indian allegations is the video (featuring Adil Ahmad Dar), which has not even been recorded in Kashmir. This video has been recorded in Afghanistan, and it features voiceover, which indicates dubbing as the voice is not synched with the lips.”

A similar pattern is being observed in the Pulwama attack, and now New Delhi is using it as a pretext to stage anti-Pakistan propaganda throughout the international community”, remarked Zaid Hamid.

Zaid Hamid raised some interesting questions. “At present, there are 700,000 Indian army soldiers in Kashmir and their military presence across the region is very strong. How did the Indian government discover that the vehicle was carrying 350 kg of explosives? Creating such a vehicle would require high-level expertise, and how can Kashmiri Mujahideen have access to 350 kg of explosive material?”

He linked the Pulwama attack with the terror episode of the Sumjhota Express when accusations for the attack were leveled at Lashkar-e-Taiba (LeT) and investigations later revealed that the RDX explosives were provided by Col Prohit of the Indian military intelligence. “A similar pattern is being observed in the Pulwama attack, and now New Delhi is using it as a pretext to stage anti-Pakistan propaganda throughout the international community”, remarked Zaid Hamid.

Zaid Hamid further notes that New Delhi exhibited a “pre-meditated response,” minutes after the attack, and began leveling accusations against Pakistan without any evidence. “There is a deliberate strategy to win over public opinion before the Indian election, and the BJP leaders believe that a small-scale skirmish with Pakistan will facilitate their win. Mohammad Bin Salman’s visit to Pakistan will be followed by an extensive visit to India, and after his departure, Modi is expected to set the stage for a skirmish with Pakistan.”

“The sentiment of war with Pakistan is a powerful catalyst for the Indian election, and BJP policymakers, including Subramanian Swamy, have threatened to break Pakistan into four pieces. Winning the election over animosity with Pakistan is indoctrinated in the BJP agenda, and these false flags are a tactic of rallying the forces of nationalism.”

The Quint reported that prior to the Pulwama attack, the CRPF personnel had requested for Air Transit for the very same convoy that was attacked due to safety concerns, however, these requested were “ignored by the Ministry of Home Affairs”. Moreover, retired IGP, CRPF VPS Panwar, a former convoy commander in Kashmir, revealed to The Quint that this attack was a “complete security failure” that indicates that “senior officials ignored intelligence inputs”.

BJP is expected to use this incident to rally up the Hindu nationalists by staging anti-Muslim propaganda across the country, and the Indian public has already begun to harden its stance against the Kashmiris.

Global Village Space reached out to Zaid Hamid for comment on Pakistan’s alleged support to JeM and its founder, Masood Azhar. “Masood Azhar disappeared from public many years ago, when his group was banned in Pakistan. It is difficult to say whether he is still alive or not. Since several years, Pakistan has banned all cross LoC operations conducted by JeM and JuD, and there is no evidence of Pakistan’s support to these groups. In any case, cross LoC operations are not possible given the multi-layered fencing, posts, and landmines”, explained Zaid Hamid.

A Pretext for Large-scale Communal Violence?

Reports have emerged of agitation and protests against Kashmiri Muslims across Jammu city and other states of India. Kashmiri students studying across India are being threatened and forced to evacuate and return to their homes. Kashmir Life News Network reported a statement issued by AIP President, Er Rasheed, who condemned the anger and protests staged against Kashmiri Muslims and appealed to the law enforcement agencies to provide protection to all without “being biased”.

Er, Rasheed is reported to have said, “No one is celebrating the deaths of the CRPF Jawans who lost their lives in the Pulwama attack, and no one can relate to the pain of their families better than the Kashmiris, as we have been coping with such tragic losses for the past three decades.”

He issued stern warnings to all those who are attempting to give this incident a “communal color” and using it as a pretext to trigger “communal tension in Jammu city”. He also appealed to the BJP leadership to exhibit “maturity” and move away from its agendas of “regional and religious politics”.

While speaking to the Global Village Space with the condition of anonymity, a senior journalist from Indian occupied Kashmir has also noted that New Delhi will attempt to present this attack with its “own anti-Pakistan and anti-Kashmir narrative. “This attack has deadly consequences for the youth of Kashmir, and youngsters are being rounded up as this tragedy has given the Indian security forces the right to do as they please. BJP is expected to use this incident to rally up the Hindu nationalists by staging anti-Muslim propaganda across the country, and the Indian public has already begun to harden its stance against the Kashmiris.”

“Strict curfews are being imposed throughout the valley, and all those who are using social media as a tool to further the Kashmiri cause are being rounded up and subjected to brutality and questioning. The situation is deteriorating by the minute, and we are worried that in the coming days, more bloodshed is expected to be staged against the Kashmiri population.”

Bahria Town case: What is the crime of common citizens?

Longest Space Mission By Woman: US Astronaut Returns to Earth

The Saudis will get away with murder – Jacob G Hornberger