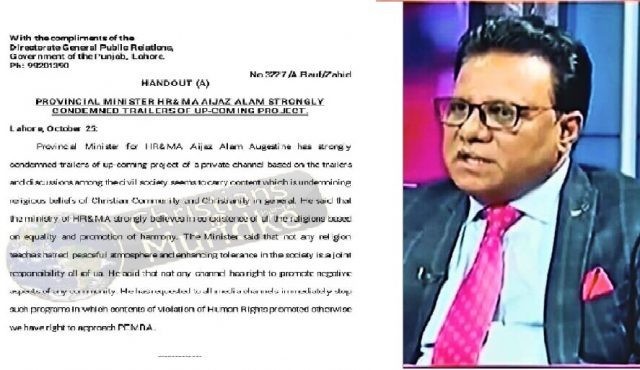 The minister expressing his ire stated that the ministry believed in the peaceful co-existence of different religious communities. He added that every religion supported harmony, love, and equality. Hence it was a collective responsibility to promote a tolerant society.

Mr. Augustine said that no channel had the right to demean any religion or promote its negative aspect. He urged the T.V channels to avoid broadcasting programs that were an open violation of human rights. He warned of prospective action the channels who failed to comply by the law.

“Otherwise we have the right to approach PEMRA,” he added. Maria Bint-e- Abdullah is a drama serial that is soon to be aired on a private TV channel. Kinza Hashmi is playing a Muslim girl, Maria, while Saman Ansari is her Christian mother, Jenny D’Souza.

On the other hand, Hamza Firdous is playing Ammar, a religious Muslim man in the drama serial. The trailer of the drama shows Maria telling that her mother was a Christian but she is Muslim as she is a daughter of Abdullah, a Muslim man.

Hamza told a local media outlet about his character in the play. “I’m playing Ammar, a businessman whose parents died early hence his Dadi (grandmother) took care of him. He is a religious person that reflects in his demeanor and his every day dealings. I will be seen saying naats, hamds, and kira’ats.”

Regarding his role in the play Firdous said, “As an actor, it was challenging because I haven’t played such a character before,” he added. “I did play a religious negative character in a theatre play in Dublin but on screen, it’s a new experience..”

He further added that during her visit to Karachi Maria would cross paths with Ammar and the two would fall in love. The story is not, however, as simple but– as informed by Hamza Firdous–a complex love story.

“It has all the blends such as emotions, twist and turns, and conflicts,” Hamza Firdous said in conclusion.

When Cenk Yelled at Kevin Smith – The Young Turks