Reham Khan, whose animosity against PM Khan is glaringly evident, sees JUI-F workers more civilized and respectful than PTI workers. She further went on to say words of praises for them that has everybody in fits. 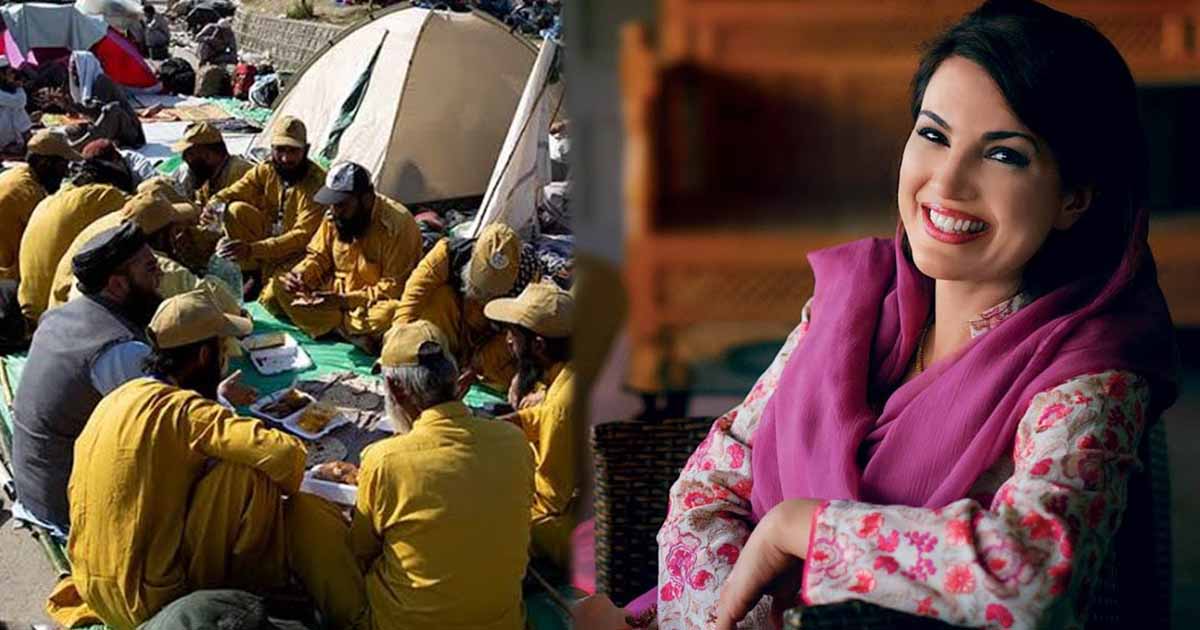 Reham Khan, the former wife of PM Khan, in her latest video is seen cheering the followers of Maulana Fazl-ur-Rehman who have to come to Islamabad for a sit-in protest against PM Khan and his government.

Reham, who runs a YouTube channel and posts her videos on political analysis, was heard praising the demonstrators as ‘sweet‘ ‘innocent‘, ‘humble‘ and ‘adorable‘ in her latest video.

Under the garb of sharing a balanced analysis on JUI-F’s Azaadi March, Reham Khan took a dig at the young PTI supporters. She, compared to the young loyalists of both the political parties, asserted that she found JUI-F workers humble and sweet whereas the PTI supporters are void of basic ethics on the respect of women.

She backed her assertion with declaring herself as an eye witness to the humble, peaceful and civilized conduct of JUI-F workers. She added that PTI workers are uncivilized who does not know how to respect or protect the honour of someone’s daughter, mother, and sister.

She shared a small video clip of praising JUI-F workers on her social media account. She asserted that notwithstanding dissension she will continue to say what she believes. She does not care if her message offends anyone.

Her assertions are in stark contrast to various media reports, which reported various incidents of female reporters being verbally harassed during the coverage of Azaadi March. The incident of anchor Shiffa Yousafzai being the latest example of how the JUI-F workers intimidated her to leave the premises immediately. Moreover, several other young female reporters reported similar incidents at JUI-F Azaadi March.

Meanwhile, this is another attempt by Reham Khan to malign PTI in her enmity with Imran Khan. While PM Khan had already described his decision to marry Reham Khan ‘a mistake‘, Reham Khan is ready to go to any threshold to defame PM Khan in vengeance.

From leveling allegations of receiving illegal funds from abroad, Reham Khan has even called PM Khan a ‘womanizer‘. Her book ‘The Reham Khan’ is rife with objectionable accusation on him.

Recently, she accused him of selling Kashmir to India. She alleged him of reaching a compromise with PM Narendra Modi on Kashmir in the name of a ‘Kashmir deal’. She slammed PM Khan for a sluggish and indecisive response on Kashmir as a move to please the Indian government. Reham Khan asserted that PM Khan did nothing to thwart PM Modi’s predicted move of revoking Article 370 and 35-A.

Earlier in her article for an international outlet, she drew a comparison of personalities between Britain’s new Prime Minister, Boris Johnson, and PM Imran Khan.

Reham Khan has held a scornful attitude towards Imran Khan ever since the dissolution of their 10-month union in 2017. She has even written a book with explosive allegations against Imran Khan on his personal life, moral conduct, and foreign funding.

Previous articleEhsaas Program: PM Khan Announces Scholarships For Undergraduate Students
Next articleAre You A Beginner When It Comes To Using A Credit Card? Here Is Some Useful Information For You

18 June 2021
Previous articleEhsaas Program: PM Khan Announces Scholarships For Undergraduate Students
Next articleAre You A Beginner When It Comes To Using A Credit Card? Here Is Some Useful Information For You

Will Pakistan be able to become a strong democracy as government completes its tenure?

Pence, Abbasi meeting: What was the real agenda?

Animals are dying in Pakistan’s zoos & no one cares