The renewed pressure on Iraq's government came a day after three rockets hit the US embassy in Baghdad, wounding one person and marking a dangerous escalation after months of close calls against American facilities. Youth-led rallies are raging in Iraq over corruption, joblessness and poor services but have been met with violence; more than 500 demonstrators have been killed since the protest movement began in October, with rights groups accusing security forces of using excessive force. 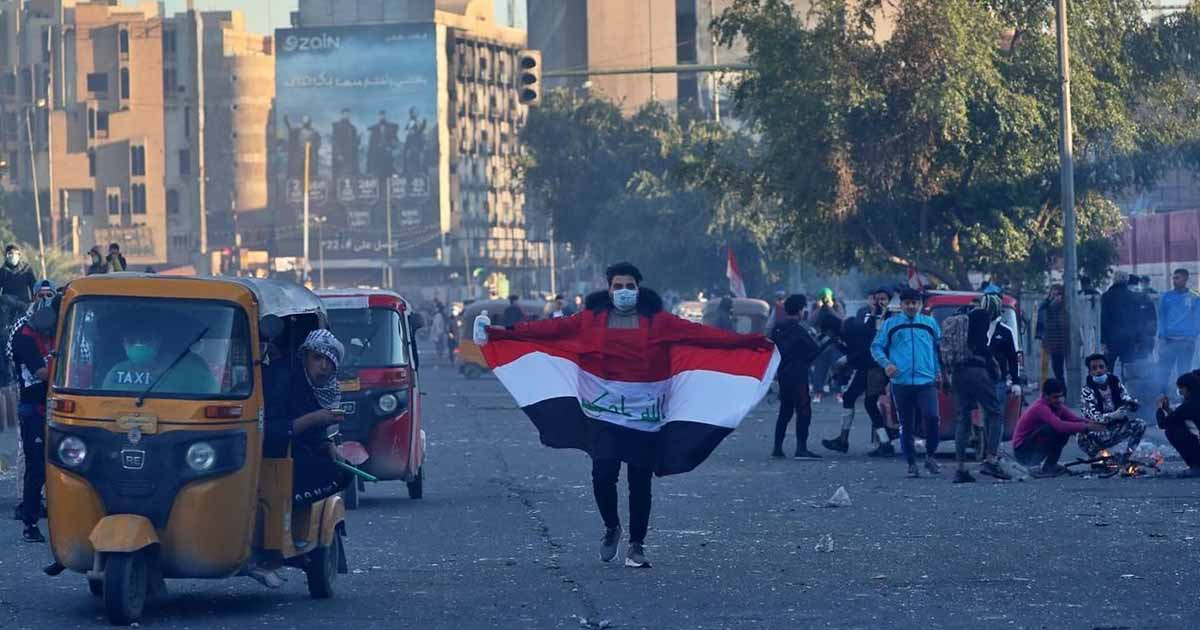 Anti-government demonstrators rebuilt torched protest camps across Iraq on Monday as more than a dozen countries condemned the “lethal” reaction by security forces seeking to snuff out the civil campaign.

The renewed pressure on Iraq’s government came a day after three rockets hit the US embassy in Baghdad, wounding one person and marking a dangerous escalation after months of close calls against American facilities.

Five rockets crashed into a riverbank near the embassy in the Iraqi capital without causing any injuries, the US Joint Operations Command said in a statement, but a security source said three of the rockets “directly hit the US embassy”. One slammed into a cafeteria at dinner time, it added.

US Secretary of State Mike Pompeo said Monday on Twitter that “the government of #Iraq must take immediate steps to protect our diplomatic facilities as required by international law.”

Anti-government demonstrators rebuilt torched protest camps across #Iraq, seeking to keep up their movement's momentum after a rocket attack on the US embassy in Baghdad threatened an escalation. https://t.co/564JfBg3D7— Saudi Gazette (@Saudi_Gazette) January 27, 2020

The attack on the embassy sparked renewed fears that Iraq could be dragged into another armed conflict as its capital and Shiite-majority south are rocked by the country’s largest and deadliest grassroots movement in decades.

Youth-led rallies erupted over corruption, joblessness and poor services in Iraq but were met with violence; more than 500 demonstrators have been killed since the protest movement began in October, with rights groups accusing security forces of using excessive force.

Security forces and unidentified gunmen this week tried to clamp down on rallies again, and more than 20 protesters have lost their lives.

On Monday, 16 ambassadors based in Iraq issued a joint statement condemning the “excessive and lethal use of force” and demanding the government allow citizens to protest freely in Baghdad and the south.

“Despite assurances by the government, security forces and armed groups continue to use live fire in these locations, resulting in multiple deaths and injuries of civilians, while some protesters face intimidation and abduction,” said the statement. It was signed by the US, UK, France, Germany and a dozen other countries.

Anti-government activists feared a crackdown this week after losing the support of powerful Shiite cleric Moqtada Sadr, who backed the rallies when they first erupted then abruptly changed course Friday after holding his own rally.

University students have carried the torch, gathering in the thousands to insist on their political independence.

“When we first came out to protest and hold sit-ins, we didn’t commit to the narrative of the Sadrist movement or any other political party,” said Zainab Mohammad, a university student in the shrine city of Karbala.

#Protesters all over world are not allowed to protest beyond permitted time limit;will be cleared either by police or troops. In Iraq19 protesters were wounded when troops cleared them.Why India allows unlawful #ShaheenBagh protesters for long?@AmitShahhttps://t.co/6BFeAhpqr6— Dr. C. Murukadas (@drmurukadas) January 26, 2020

“We came out on our own, and we will continue until our demands our met,” she said.

Protesters are demanding snap elections, an independent successor to prime minister Adel Abdel Mahdi — who has resigned but remains in a caretaker role — and the prosecution of those implicated in corruption or recent bloodshed.

Early on Monday, unidentified gunmen stormed a protest camp in the flashpoint southern city of Nasiriyah and torched tents, an AFP correspondent there said.

The attackers fired on activists who had been sleeping there, killing one and wounding four others, a medic said.

But hours later, determined protesters had erected new tents and even built a one-room cement installation, signalling their determination to stay put.

In the oil-rich but impoverished port city of Basra, student protesters re-erected tents dismantled by authorities over the weekend, AFP’s reporter said.

The main protest camp in the Shiite holy city of Najaf was also burned down overnight by unidentified gunmen, but protesters jumped into action Monday morning, blocking roads with burning tyres.

In the early afternoon, a funeral march made its way through the city to mourn the young man killed earlier in the day in Nasiriyah, identified as 14-year-old Ali Zuweir.

Relatives carried the boy’s coffin through Najaf, a favoured burial place for Iraqi Shiites, holding up his portrait and weeping loudly.

Sadr’s march on Friday saw thousands turn out to demand American troops leave the country, after the US used Iraqi airspace to carry out a drone strike on top Iranian and Iraqi officials on January 3.

Outraged, Iraq’s parliament voted on January 5 in favour of ousting all foreign forces, including the 5,200 US troops deployed in Iraq.

Pro-Iran factions in Iraq, particularly those tied to the Hashed al-Shaabi military force, had long lobbied for the ouster of American forces.

Qais al-Khazali, head of Asaib Ahl al-Haq, lays out his demands for the next Iraqi PM:

– Must pledge "to abide by the parliament and people’s decision to remove the foreign forces." https://t.co/hO6lclkF3X

Other conditions for the new premier included holding snap parliamentary elections by the end of the year and implementing a landmark development deal with China.

Washington has blamed hardline Hashed factions, including Khazali’s Asaib Ahl al-Haq for rocket attacks on the US embassy and American troops in recent months.

On Sunday evening, three rockets slammed into the US embassy, wounding one person, according to a senior Iraqi official and US diplomatic sources.

No details were available on whether the casualty was a US national or an Iraqi member of staff.

Pompeo “expressed his outrage at the continued assaults by Iran’s armed groups against US facilities in Iraq”, the State Department said in a statement.

The statement said that “these attacks demonstrate a wanton disregard for Iraqi sovereignty and a failure to rein in these dangerous armed groups”.

Amnesty International hails spirit of charity in Pakistan during lockdown

Will Sardar Usman Buzdar be the next CM Punjab?