Silvia Romano, an Italian aid worker in East Africa, becomes Silvia Aisha. She read the Holy Quran and decided to accept it. However, she becomes the target of anti-Islam, far-right campaign in Italy. A politician demanded that “Aisha should be hanged.” 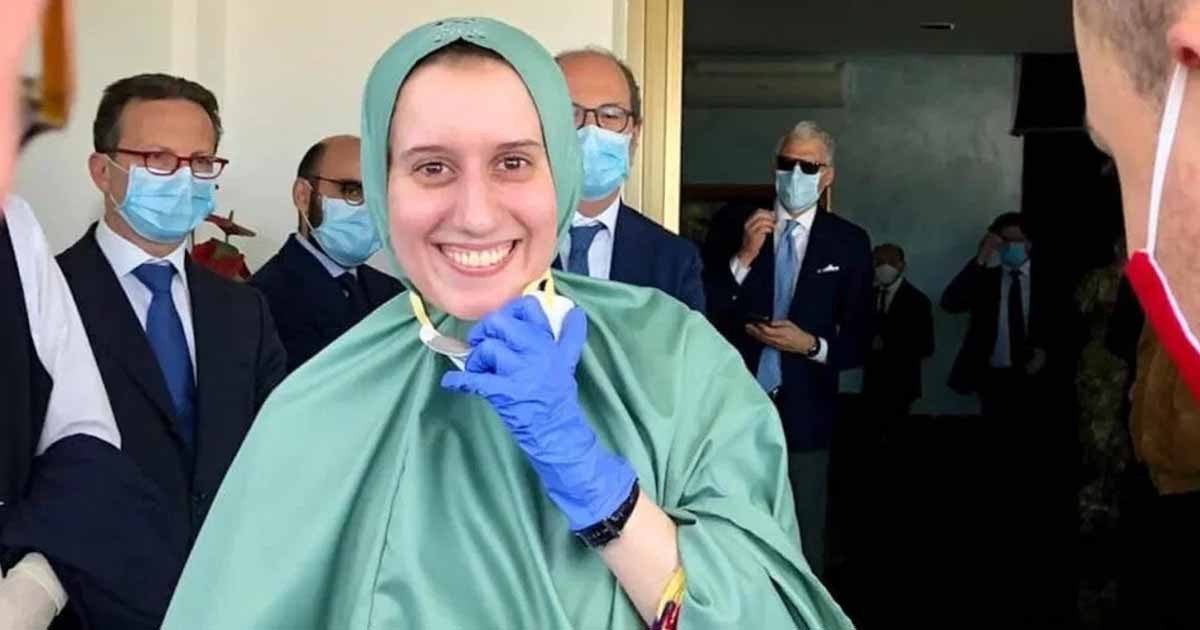 Silvia Romano, an Italian aid worker kidnapped 18 months ago in East Africa, recently landed in Rome after being freed. Romano, who was working for an Italian charity called Africa Milele, in southeastern Kenya, was reportedly kidnapped in November 2018. No group claimed responsibility for the kidnapping. Silvia Romano has converted to Islam and her new name is Silvia Aisha.

Backlash in Italy after it was discovered government paid upwards of €4m to free a kidnapped charity worker from Somali jihadist group al-Shabab. Silvia Romano says her captors treated her well & she converted to Islam. She goes by Aisha now & wears veil. https://t.co/sMYAuqsxPI

“It’s true, I converted to Islam. It was my free choice. There was no coercion on the part of the kidnappers, who always treated me with humanity. It’s not true, however, that I was forced to marry. I wasn’t subjected to physical torture or violence,” she said during a debriefing immediately after hugging her relatives, according to Italian news agency ANSA.

“I was strong and resisted,” Aisha told Italian Prime Minister Giuseppe Conte. She said she converted to Islam after having read the Qur’an. “I begged my jailers to give me a book, and they came with the holy book. I read it through fully,” she told the prosecutor in charge of the investigations of her kidnapping.

Read More: ‘Islamophobia is a challenge created, developed and aggravated by Muslims’

“After lots of deep meditation on the teaching of the holy book, I decided I was ready for my conversion. It was completely my decision. Nobody forced me. My name now is Silvia Aisha.”

The safe arrival in Italy of the young woman, who was wearing a traditional green Islamic African tunic, was celebrated in her home city Milan with peals of church bells and neighbors applauding and singing from their balconies.

Aisha became the latest target of a hate campaign after conversion

Aisha has become the focus of a far-right hate campaign after returning home. “Islamic and happy. Silvia the ungrateful” read the front-page headline of right-wing daily Il Giornale on Monday.

A politician from the province of Treviso posted on Facebook that Aisha should be hanged. The post was swiftly removed.

Alessandro Sallusti, head of the Il Giornale newspaper, which is owned by the brother of former Italian prime minister Silvio Berlusconi, tweeted: “Silvia is back, and well. But it was like seeing a concentration camp prisoner proudly dressed as a Nazi. I don’t understand, I will never understand.”

The police have been patrolling the Milan street where Ms Romano lives, and a Milan prosecutor has opened an investigation into the onslaught of threatening messages directed toward her on social media. Supporters said it was as if she had been freed by her kidnappers only to be held hostage — in her home — by Italian haters.

The story of Aisha’s kidnapping

Silvia Aisha was kidnapped in November 2018. According to Turkish security sources she was rescued after a joint effort by Turkey’s MIT intelligence agency and Italian and Somalian government authorities. “The MIT began work in the region on determining Romano’s condition in December 2019 upon a request from Italian authorities,” the sources said.

Read More: The rise of Islamophobia: pregnant woman beaten up

They added that Aisha was delivered to Italian authorities in Somalia on Saturday after the joint efforts.

“I am literally bursting with joy at this moment. But it is hard to even only to think, please let me breathe. I need to withstand the shock, happiness is so big that it is exploding,” Aisha’s father, Enzo, was quoted as saying by several Italian newspapers on Sunday.

Prime Minister Giuseppe Conte said that the task force working to free Romano had been in the final stages ‘for the last months’, after having proof that she was still alive. He added that details were not disclosed so as to not compromise the operation.

The rise of Islamophobia in Italy

Oriana Fallaci, a late Italian journalist who wrote several articles and books against Muslims and Islam, is considered to be a great inspiration by many far-right campaigners in present-day Italy. After September 11, Fallaci adopted an anti-Islam stance and today her legacy is enjoying a moment of renewed popularity.

She wrote three books – The Rage and the Pride, The Force of Reason, and Oriana Fallaci Interviews Herself – in which she described the Muslim world as an ‘enemy we treat as a friend’ and warned Europe about what she believed to be the danger of becoming ‘Eurabia’.

Fallaci borrowed the term from a conspiracy theory popularized by the Egyptian-born British writer Bat Ye’or (a pseudonym for Gisele Littman) about an alleged plan to ‘Islamise’ Europe through mass immigration.

On September 28, 2001, a week after the September 11 attacks, Corriere della Sera, the Milan-based newspaper, published a five-page article titled La Rabbia e l’Orgoglio, or Rage and Pride, in which Fallaci accused the West of being too soft on Islam and Muslim immigrants.

In Italy, she argued, “There is no place for muezzins, minarets, fake teetotalers, their f****** middle-ages, and their f****** chadors.”

A few months before her death, Fallaci famously said she was ready to blow up the minaret of a mosque in Chianti because she did not want to “see a 24-meter minaret in the landscape of Giotto when I can’t even wear a cross … in their country!”

Islam in the West: Freedom to express or oppress?