Inside a cell barely illuminated through small skylights, a man perches on a stool and holds out a plastic sheet to divide the space into separate family sections. Such haunting stories of Syrians refugees mar human history. 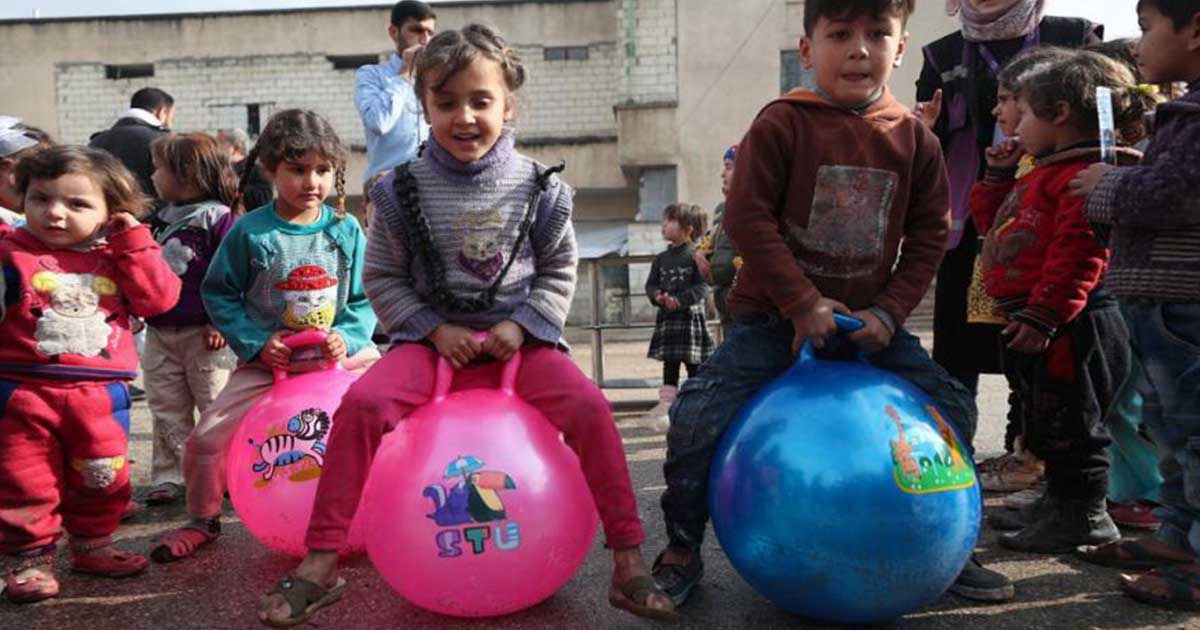 Children play in a prison courtyard, while adults divide a cell inside between several families. Fleeing violence in northwest Syria, they found nowhere else to go.

They are among hundreds of thousands of people uprooted by war who are starting the new year far from home in the embattled opposition stronghold of Idlib.

According to the United Nations, 284,000 people fled their homes near the town of Maaret al-Noman in December alone, due to a peak in violence as regime forces try to retake the jihadist-run region.

Among them, 69-year-old Umm Hatem and her unmarried son sought safety in the city of Idlib, but when they arrived the only shelter available was in the abandoned jail.

The kids still have their whole lives ahead of them. We don’t want them to go through what we are with this war

“We settled here even if it’s uninhabitable,” said the elderly lady, outside the former detention centre now home to some 300 adults and children.

“There’s no water, no electricity, no light, and the cells are narrow and suffocating,” she said, her face etched with wrinkles and hair wrapped in a brown scarf.

Not enough to eat

Dressed in a warm woollen cardigan, Umm Hatem helps unload a truck laden with scant belongings from her home: jars of pickle and grain, plastic buckets and a plastic rug.

“If we had the means, we would have rented out a home,” she said.

“But we don’t even have enough to eat.”

In the courtyard, three children race each other on space-hoppers large and brightly coloured bouncy balls wobbling before they lurch forward across the wet asphalt.

Cheered on by visiting charity workers, they clutch either side of a black rope and lean back in a tug-of-war.

But inside a cell barely illuminated through small skylights, a man perches on a stool and holds out a plastic sheet to divide the space into separate family sections.

Backed by Russian war planes, regime forces have upped their deadly bombardment of the Idlib region in recent weeks, sparking the latest round of displacement in Syria’s nine-year war.

“Public buildings such as mosques, garages, wedding halls and schools are being used to host newly displaced families,” the UN humanitarian agency OCHA reports. But “the capacity to absorb people in need may surpass available places given the scale of displacement”, it warns.

Across the region, families who lost their homes earlier in the war already live in numerous camps for the displaced, or even in olive groves along the Turkish border.

In a school turned shelter, families have strung up laundry in the courtyard.

A dozen families live in the former school, after moving the desks into a storage room and laying out plastic rugs on the floor. Thin foam mattresses line the wall.

“Schools have been transformed into shelters for those displaced from Maaret al-Noman” and other southern parts of the Idlib region, charity worker Abdessalam al-Ameen said. “Teaching has stopped,” he said.

Back in the prison courtyard, Abdelqader Shawarghi trims the hair of a small boy draped in a barber’s cape and seated on a wooden plank propped on a plastic chair.

After arriving a few weeks ago, the 29-year-old barber is doing his best to use his skills to support his wife and two children. He hopes the new year will bring Idlib’s children a brighter future.

“The kids still have their whole lives ahead of them. We don’t want them to go through what we are with this war,” he said.

“God willing, this new year will mark the end of the war in Syria.”

Zainab culprit to be produced before Anti-Terrorism Court today