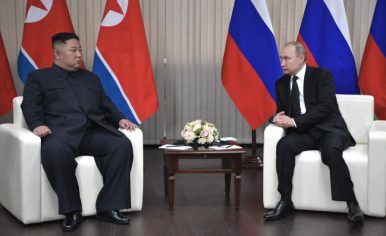 But the Korean War (1950-1953) was far more catastrophic than all the wars India and Pakistan ever fought over Kashmir. The military casualties (dead, wounded or missing) exceeded 1 million while the civilian casualties are estimated to be several millions.

The key passages of the Panmunjom Declaration jointly issued by the leaders of South and North Korea – Moon Jae-in and Kim Jong Unread as follows:

A signed joint statement was issued after several hours of talks between Moon and Kim (including one-on-one discussion as they strolled through the gardens and sat privately against the leafy backdrop with a serene atmosphere, deep in conversation, animatedly, but out of earshot). The joint statement is largely aspirational and doesn’t spell out concrete steps. But it flags the general idea that “the South and North have confirmed their common goal of realizing a nuclear-free Korean peninsula.” The highlights are:

Kim noted, “We hope we will not repeat our mistake of the past. I hope this will be an opportunity for the two Korean peoples to move freely from North to South. We need to take responsibility for our own history.” Of course, there are still huge strategic and political divisions between North Korea on one side and South Korea and the United States on the other side. But this is a good start, since there has been a concrete commitment by Kim on denuclearization.

All the key players in the region have welcomed the agreement, including China and Japan. Russia’s Foreign Ministry says it is ready to facilitate cooperation between North and South Korea, in railways, gas and electrical energy. China has taken care not to distract from the meeting at Panmunjom. The Chinese coverage of PM Modi’s meeting with President Xi Jinping at Wuhan has been noticeably restrained. China’s foreign ministry spokesman Lu Kang has ben quoted as saying,

Trump’s first reaction to the Panmunjom meeting has come when he tweeted, “After a furious year of missile launches and Nuclear testing, a historic meeting between North and South Korea is now taking place. Good things are happening, but only time will tell!”

South Korea is showering all praise on President Trump and giving him credit for what happened today at Panmunjom. It is a wise strategy since South Korea is essentially creating a positive momentum for Trump’s forthcoming summit with Kim and flattering the US president’s vanities at the same time. Put differently, South Korean president Moon is ensuring that Trump gets the Nobel Prize for Peace this year – and getting Trump to believe he earned it. But the real winner is Moon himself in taking a great leap forward in his life’s mission of inter-Korean reconciliation.

How is Qatar countering the spread of Fake News?