The report came after several Twitter accounts with the name of Maj Gen Babar Iftikhar surfaced as he replaced Maj Gen Asif Ghafoor as the new director-general of Inter-Services Public Relations.

It is, however, not clear yet if DG ISPR Maj Gen Iftikhar Babar will be using any other social media account besides the official social media pages of ISPR.

Former DG ISPR was an active social media user, who had been at the forefront in busting the propaganda by enemies. Several times he resorted to preemptive measures alerting the nation and global audience of the vindictive intentions of India to target Pakistan.

From addressing key press conferences through his tweets, DG Ghafoor takes a sturdy approach to smash the vile propaganda from India and libelous targets on armed forces within the country.

From highlighting the persecution of Kashmiris and Indian Muslims, he is utilizing the social media trend to bring forth all that is bad with the BJP government. 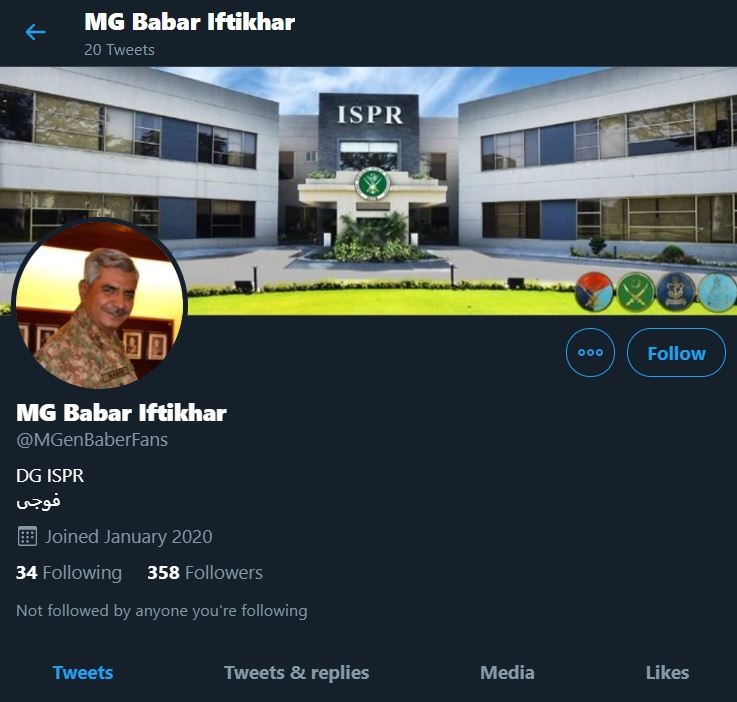 DG ISPR’s profound comprehension enables him to tailor his speeches and assertions concerning the situation.

From mocking Bollywood for producing a movie on Abhinandan Varthaman, Indian Air Force Wing Commander, he has even slammed the intimidating statements by Indian armed forces on his Twitter account.

He even spearheaded several social media campaigns against the ultra-nationalistic government of BJP on social media.

ISPR has been relentlessly working towards building a narrative against India, highlighting its complicity in bolstering terrorism in the region.

ISPR’s role has been modified particularly after the mini aerial combat between IAF and PAF in February this year that Pakistan sealed with triumph and India’s abrogation of Article 370 and 35-A on Kashmir in August.

Appreciation from India twice poured in for ISPR’s exceptional and proactive role in information warfare during the tenure of former DG ISPR Asif Ghafoor.

AFP - 21 January 2022
The flame of the immortal soldier was installed at the India Gate in New Delhi following the conflict, which eventually led to the creation of independent Bangladesh. It had burned ever since fuelled first by cylinders of liquified petroleum gas and later with piped gas.

Taliban hit back at Biden’s claims on divisions among Afghans

How much fencing remaining on Pak-Afghan border?

Taliban hit back at Biden’s claims on divisions among Afghans

How much fencing remaining on Pak-Afghan border?