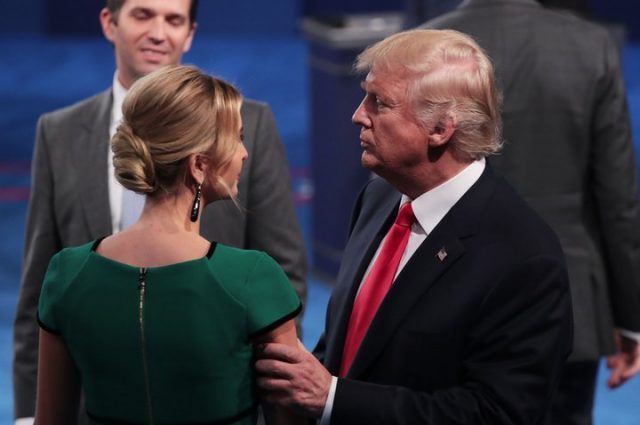 Trump has ‘mused’ of Jared and Ivanka leaving the white house, according to a report by the Washington post.

The report came against the backdrop of downgrading of Jared Kushner’s security clearance by white house chief of staff, General Kelly. The couple has had rare access to the president and had been given the role of senior advisors to the president. Jared, Trump’s son-in-law, even had access to the PDB or the President’s Daily Briefing, a highly classified document. It was widely believed that Ivanka and Jared have had undue influence over Trump and often changed the president’s mind at the last minute before major announcements.

Kushner’s security clearance was downgraded at the end of February, amidst Robert Mueller’s investigation into links between Trump associates and the Kremlin. Moreover, there have been concerns that  Kushner  may have a potential conflict of interests with revelations that Kushner’s family business received loans after meetings with Joshua Harris, a founder of Apollo Global Management, in the white house. Harris was said to be advising the Trump administration on infrastructure policy.

It is tempting to draw parallels with the domestic situation in Pakistan. We have also had a daughter to the Prime Minister who has little prior political or diplomatic experience but still had the Prime Minister’s ear on key issues.

Kushner has been reported as compromised by foreign influences as he is trying hard to find investors to save his family’s real estate empire that has been plunged in 1 billion $ of debt. Vulnerable advisors have to undergo security clearance. At least a dozen members of the Trump administration have come and gone during Trump’s first year in office.

Most recently, white house communications director Hope Hicks resigned after a six-month tenure at the white house, the longest by any member of the Trump administration who is not a relative of the president. It is no secret that the Trump white house has been a revolving door for white house staffers, but this is the first time that questions have been raised about the role of Trump’s relatives in the White house.

Trump has taken Jared and Ivanka to important meetings with premiers of other countries, including the President of France and the Prime Minister of Japan. Ivanka also visited India and met with Narendra Modi on behalf of the US.  Recently, Trump tweeted that a better and smarter person than Ivanka could not be found for representing the United States in South Korea. Kushner has been seen and photographed in virtually every meeting Trump has had.

He was also given a wide range of duties by the president, from upgrading the federal government’s outdated technology to bringing peace between Israel and Palestine, a goal that has eluded presidents and diplomats for generations. Many Trump supporters and members of congress have spoken in support of the Jared and Ivanka and their ability to get the job done.

According to David Jolly, former representative of Florida’s 13th congressional district, Jared and Ivanka were the only adults in the room in meetings. Regarding Ivanka Trump, Senator Bob Corker has said she is the best choice for the job and stated that  he has never met person who was “more beautiful and intelligent in every way”.

However, when retired four-star General Kelly took on the job as white house chief of staff in July, he aimed at imposing some appearance of order in the chaotic Trump white house. “Jared works for me,” he has told associates. He has also said that Kushner needs to operate within a chain of command. It is worth pointing out that Kushner has no experience in diplomacy, policy making and politics in general.

He is an investor, a real-estate developer and a newspaper publisher. The new white house chief of staff has been less permissive than his successor. Previously, Jared sat with the president for hours daily, making sure that other members of the Trump administration could not persuade the president to make decisions that ran counter to what he wanted. Under General Kelly, white house staffers are expected to stay within their lanes.

The President believes that his son-in-law is being treated unfairly in the media. Trump said a week ago, “Jared’s done an outstanding job. I think he’s been treated very unfairly. He’s a high-quality person.” However, according to the Washington post report, he has considered the possibility that Jared and Ivanka might be better off leaving the white house and staying in New York.

It is tempting to draw parallels with the domestic situation in Pakistan. We have also had a daughter to the Prime Minister who has little prior political or diplomatic experience but still had the Prime Minister’s ear on key issues. Trump is the first modern American president to include family members into his cabinet.

With some republicans demanding that the president fire Ivanka and Jared, revelations by the  Washington Post report have cast doubt over the future of the ascendant power couple in the white house.