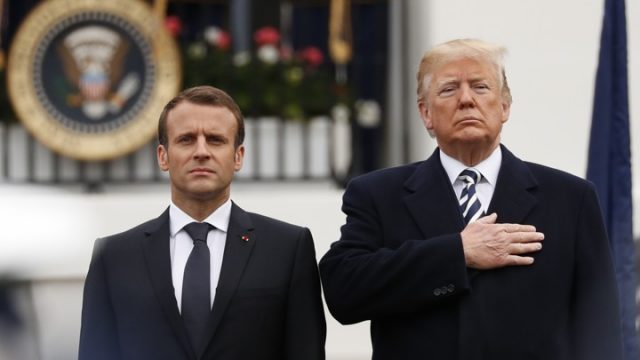 The 3-day state visit of the French President Emmanuel Macron to the United States has turned out to be a disaster for his host Donald Trump. This is the first time Trump has given a foreign dignitary the honor of a state dinner, a very ceremonial event. He probably intended the symbolism to highlight the friendship with France, “not only a friend but America’s oldest ally”, as he put it.

Most certainly, he was reciprocating Macron’s invitation to Trump to pay a state visit on Bastille Day. Trump loves pomp and circumstance. He was so impressed that on his return from France, he ordered the Pentagon to prepare for staging military parades in America.

Trump is not exactly a cult figure in France – or in Europe for that matter. He evokes a range of emotions in the European mind ranging from despair to disgust to derision. Quite obviously, Trump saw in Macron his best European interlocutor – someone who has taken pains to have a good relationship with him, which is much more than what one can say about the leaders of Germany, Italy or the United Kingdom.

Macron probably got close enough to Trump to say some mean things that he wouldn’t have been able to do otherwise. Certainly, he wants to work with the US but that does not mean that he will also do whatever the Trump administration wants to do.

But it was a risky enterprise, nonetheless. Macron, a decidedly brilliant intellect, ended up exposing Trump’s pedestrian mind, which appeared even more pedestrian than usual. The 48-minute joint press conference at the White House highlighted it. (Full transcript is here.)

The high noon came when Macron addressed a joint session of the US Congress. In a 50-minute speech delivered in English, Macron tore into ‘Trumpism’. Macron expressed confidence that the US will one day (after Trump’s departure) return to the Paris accord on climate change; made a stirring call for the liberal world order of global institutions, multilateralism and free trade; and condemned the “rampaging work of nationalism.” In a thinly-veiled reference to America First, Macron said, “Personally, if you ask me, I do not share the fascination for new strong powers, the abandonment of freedom and the illusion of nationalism.”

With regard to the Iran nuclear deal, which was on top of the agenda of talks between Trump and Macron, the latter said Iran would “never possess any nuclear weapons” but he added: “This policy should never lead us to war in the Middle East.” Significantly, Macron called for respect for the sovereignty of Iran and its ancient civilization, and in a clear reference to the US’ 2003 Iraq invasion, urged the west not to “repeat past mistakes.” Macron said, “We should not abandon it (Iran nuclear deal) without something more substantial in its place.”

As he was leaving for Paris on the return journey, Macron was rather blunt. He conceded that he may have failed in the mission to dissuade Trump from dumping the 2015 Iran pact. He told reporters, “My view – I don’t know what your president will decide – is that he will get rid of this deal on his own, for domestic reasons.”

Trump saw in Macron his best European interlocutor – someone who has taken pains to have a good relationship with him, which is much more than what one can say about the leaders of Germany, Italy or the United Kingdom.

Macron said harshly that the US flip-flopping on international agreements on global issues “can work in the short term but it’s very insane in the medium to long-term”.

Macron is a very clever politician. (It was no small matter for the 39-year old politician to marginalize France’s established political parties to win the presidency by creating a new party of his own.) The state visit to the US helped him to emerge ‘presidential’ at a time when he is being battered at home in a standoff with train workers and other trade unions and is yet to prove himself amidst a drop in popular rating.

In the final analysis, Macron might have extracted much more out of the state visit than his host could. The much talked about “bromance” between Trump and Macron all but turned out to be a case of “tough love.” Macron probably got close enough to Trump to say some mean things that he wouldn’t have been able to do otherwise. Certainly, he wants to work with the US but that does not mean that he will also do whatever the Trump administration wants to do.

By 2080, Washington D.C. climate may feel like Deep South