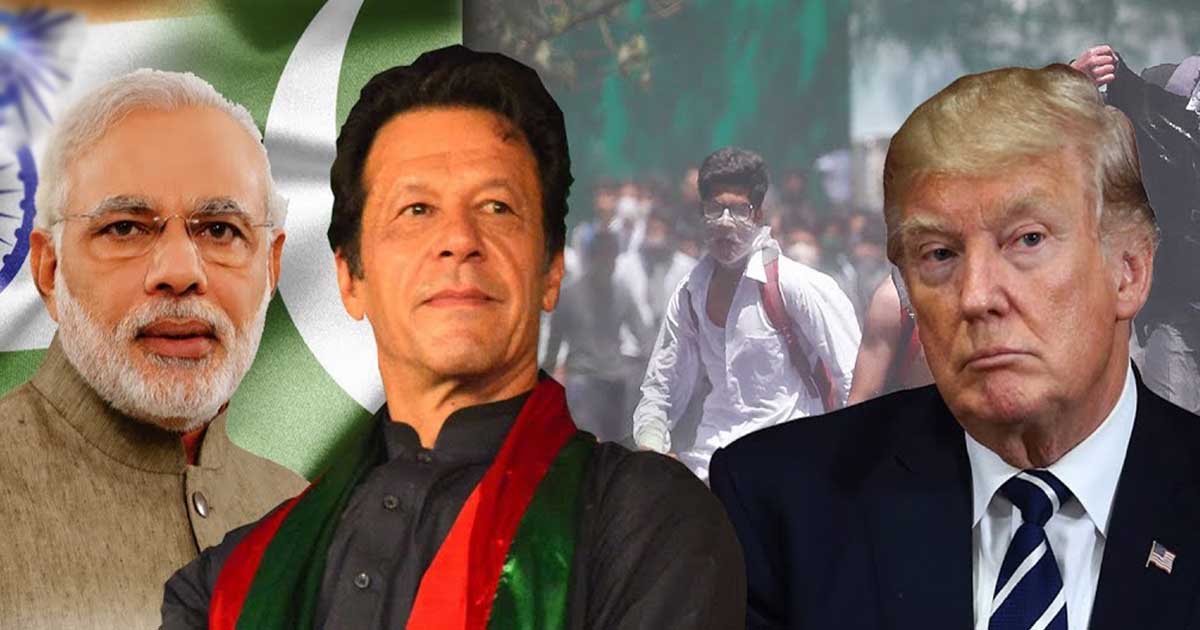 US President Donald Trump, on Monday, reiterated his offer for mediation between Pakistan and India to resolve the Kashmir dispute, despite Indian Prime Minister Narendra Modi’s persistence on bilateral dialogue and refusal to seek help from other countries.

The two leaders sat down for a meeting and later addressed a joint press conference on the sidelines of the G7 Summit, held in Biarritz, France.

Just wrapped up a great meeting with my friend Prime Minister @NarendraModi of India at the #G7Summit in Biarritz, France! pic.twitter.com/q0NOnEcjFO— Donald J. Trump (@realDonaldTrump) August 26, 2019

Modi Insists its a Bilateral Issue

US President Donald Trump was the first to address the question of Kashmir, apprising the press of his discussions with Indian Prime Minister Narendra Modi over dinner on Sunday night.

Responding to a question on his position on the offer to mediate between Pakistan and India on the issue of Kashmir, US President Trump replied, “Well, we spoke last night about Kashmir. And the Prime Minister really feels he has it under control.”

US President Donald Trump, however, clarified that his offer remains on the table, in the case the two countries fail to resolve the issue bilaterally.

Trump continued, “I know they speak with Pakistan, and I’m sure that they will be able to do something that will be very good.  We spoke about it last night at great length.”

Responding to the same question, Indian Prime Minister Modi noted that India and Pakistan have many bilateral issues, and the two countries need to join forces to eradicate the common enemies of poverty, illiteracy and diseases.

The Indian Prime Minister added, “And so, together, let us join our forces to fight poverty and all the ills that are facing our two countries.  Let us work together for the welfare of the people of our two countries. And this is the message that I keep giving my counterpart in Pakistan. Along with President Trump, we also keep talking about the different bilateral issues between us.”

Commenting on a question of whether he would like having the US President Donald Trump acting as a mediator between the two nuclear-armed neighbors, Modi replied, “India and Pakistan have — all the issues are of bilateral nature. And we do not want to give pains to any country in the world — to, in fact, try to do anything in this, because these issues are bilateral.”

#WATCH: Prime Minister Narendra Modi during bilateral meeting with US President Donald Trump at #G7Summit says,"All issues between India & Pakistan are bilateral in nature, that is why we don't bother any other country regarding them." pic.twitter.com/H4q0K7ojZT— ANI (@ANI) August 26, 2019

Modi continued, “And I trust that before 1947, when we were one country, that even afterwards we can find solutions through discussions.”

US President Donald Trump, however, clarified that his offer remains on the table, in the case the two countries fail to resolve the issue bilaterally.

Prime Minister Imran Khan pledged to act as the ambassador of the Kashmiri struggle for self-determination and address this issue at every forum available to him.

Trump said, “I’m here.  Look, I have a very good relationship with both gentlemen, and I’m here.  If for any reason — but I think they can do it themselves very well.  They’ve been doing it for a long time.”

No Positive Response from Modi

Addressing the nation on the issue of Indian-occupied Kashmir on Monday, Prime Minister Imran Khan noted that upon assuming the Prime Ministerial office, his first priority was to establish friendly relations with all countries. He noted, “India and Pakistan share multiple problems, including climate change, unemployment, inflation and more.”

The Premier noted that Pakistan wanted to engage with India on these issues and other bilateral issues through dialogue, however, there was “no positive response” from the Modi administration. Prime Minister Khan noted that before the Indian elections, the Modi-led government used the Pulwama attack as a pinnacle to raise an anti-Pakistan fervor in order to appeal to nationalism and win the election.

The premier added that India is persistently seeking out opportunities to accuse Pakistan of aiding and abetting terrorism. He noted that Indian Prime Minister Narendra Modi has made a “historic blunder” by abolishing the special status of Kashmir, and he noted that that its’ time for Pakistan’s policy on Kashmir to enter a “decisive” phase.

He said, “Narendra Modi has made a historic blunder fueled by arrogance. This is a historic moment for the people of Kashmir to realize their decades-long struggle for achieving freedom from the Indian-occupation.”

Prime Minister Imran Khan pledged to act as the ambassador of the Kashmiri struggle for self-determination and address this issue at every forum available to him.