US President Donald Trump on Tuesday signed an executive order on police reforms that he said would deliver "elegant justice" as the nation is roiled by protests over the killing of black citizens by police. This is a stark contrast from his previous support of militarizing the police. 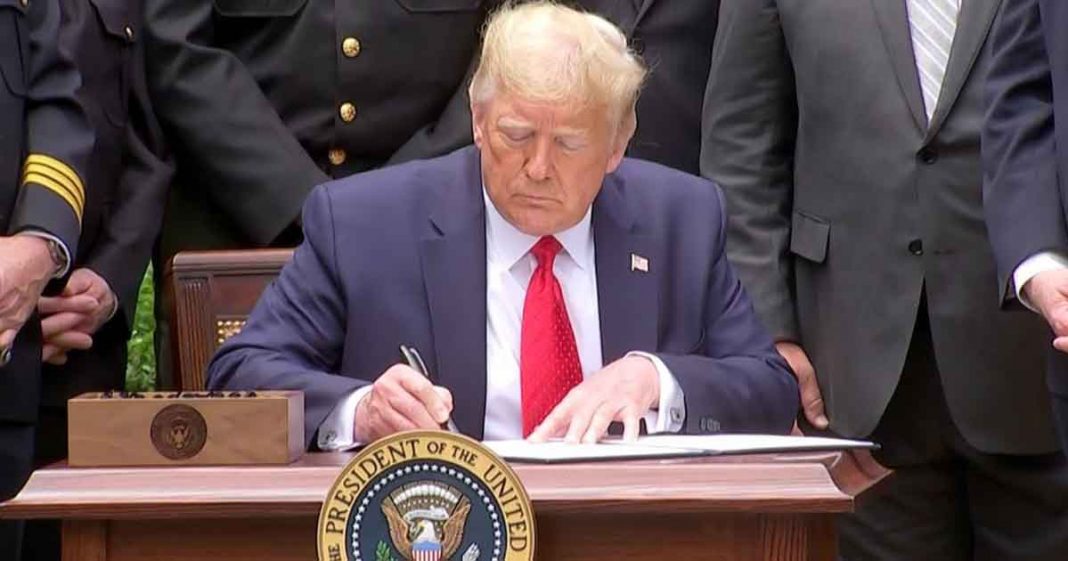 US President Donald Trump on Tuesday signed an executive order on police reforms that he said would deliver “elegant justice” as the nation is roiled by protests over the killing of black citizens by police.

The presidential directive provides funding incentives for police departments nationwide to include a ban on choke holds, extra training on guidelines for the use of force, and a database of officers who have engaged in misconduct.

“We have to break old patterns of failure,” Trump said shortly before signing the order in the Rose Garden in front of uniformed police officers.

“As part of this new credentialing process, choke holds will be banned except if an officer’s life is at risk,” he said.

The move is a step towards requests made by Democratic leaders in the aftermath of the May 25 death of George Floyd, an unarmed black man who was killed when a Minneapolis police officer knelt on his neck for nearly nine minutes.

Senate Minority Leader Chuck Schumer said that while Trump “has finally acknowledged the need for policing reform,” more action must be taken.

Schumer: "While the president has finally acknowledged the need for policing reform, one modest executive order will not make up for his years of inflammatory rhetoric and policies designed to roll back the progress made in previous years."— Kyle Griffin (@kylegriffin1) June 16, 2020

“Congress needs to quickly pass strong and bold legislation with provisions that makes it easier to hold police officers accountable for abuses, and President Trump must commit to signing it into law,” Schumer said in a statement.

Trump said that while only a “very tiny” number of officers engage in misconduct, it remains critical to build trust between citizens and police in distressed areas.

The order states that “particularly in African-American communities, we must redouble our efforts as a nation to swiftly address instances of misconduct” by police.

Shortly before his address Trump spoke with relatives of people killed during encounters with police.

“To all of the hurting families, I want you to know that all Americans mourn by your side,” Trump said. “Your loved ones will not have died in vain.”

“We must seek cooperation, not confrontation” between police and communities, and “strive to deliver safe, beautiful, elegant justice and liberty for all.”

Trump also accused Democrats, including his presidential predecessor Barack Obama, of failing to address the issue of police brutality.

Recently, a string of African Americans have been killed by police in the US, including George Floyd and Rayshard Brooks.

Recorded on video and surveillance cameras, Brooks’s fatal encounter with police was the latest in a string of incidents that has sparked a wave of nationwide protests over police brutality.

Militarization of US police: a controversial issue

When US police flooded the streets around the country to confront protesters two weeks ago, for many it appeared like the army had deployed, with camouflage uniforms and combat gear, heavily armoured anti-mine vehicles, and high-powered assault weapons.

That’s not by accident. For years the US Defense Department has been handing its surplus equipment over for free to police departments — and the departments, large and small, have revelled in it.

Critics say it has been part of the overall militarization of the police, and helped fuel mass nationwide demonstrations against police abuse and deadly tactics that began after the May 25 killing of a handcuffed African American, George Floyd, by a Minneapolis police officer.

The militarization of police departments has been a feature of U.S. domestic law enforcement since the 9/11 attacks. What is clear from the latest round of protest and response, is that despite efforts to promote de-escalation as a policy, police culture appears to be stuck in an “us vs. them” mentality.

In 2015 President Barack Obama severely limited the program, but his successor Donald Trump restored it in 2017.

This week around 200 lawmakers in Congress, mostly Democrats, sponsored a bill, the “Stop Militarizing Law Enforcement Act”, to again reel in the program.

The bill, in the House of Representatives, would strictly limit the transfer of guns, ammunition, grenades, explosives, certain kinds of vehicles, and drones and other aircraft designed for the battlefield.

Imran-led government to be Ousted by November: Asif Ali Zardari