The writer argues the George Floyd case has internationalized the debate on police reforms and the need to enhance accountability, something that is very pertinent to the Justice system in Pakistan. The case has sparked protests around the globe to stamp discrimination out of our daily lives and has brought forth an informed debate on human rights internationally

In public policy discourse, police reforms are generally associated with developing countries. It is assumed that the developed countries have little or no appetite for such reforms; the assumption is more pronounced in case of democratic countries that lead the West. Many an incident in the past has questioned this assumption, but George Floyd case has internationalized the debate.

In public policy discourse, police reforms are generally associated with developing countries. It is assumed that the developed countries have little or no appetite for such reforms; the assumption is more pronounced in case of democratic countries that lead the West.

Many an incident in the past has questioned this assumption, but George Floyd case has internationalized the debate. Before the case of George Floyd, police reforms in the US belonged to the domestic arena; any comments by other countries and international organizations on its policing system were repelled as interference in its sovereignty.

In contradistinction, the US would issue detailed reports on the state of human rights in other countries and would try to influence international organizations and aid granting countries to tie their programmes with reform agenda pushed by the West. Global media like CNN covered the protests in Hong Kong, and the US officials frequently questioned the tactics employed by Chinese police to deal with the protesters.

It went as far as passing a new law called the Human Rights and Democracy Act in November 2019 empowering the US to impose sanctions on the Chinese mainland and Hong Kong officials for abusing human rights. George Floyd’s case changed this.

On June 1, the Secretary-General of the UN, Antonio Guterres issued a statement urging the US to ‘restrain’ its response to the protestors. He also got it posted on official UN website, under the banner of Human Rights.

The ‘intermestics’ of the matter are likely to further blur the lines between domestic and international issues in times to come. Even the UK witnessed protests in Central London on June 3 in connection with George Floyd’s killing. Therefore, the general propensity of localizing police reforms has started changing.

The internationalization of police reforms has spurred the reinvigoration of international human rights law, at least for the time being. In gauging the effects of COVID-19 and the rise of nationalist governments like Modi in India that trampled upon human rights in Kashmir and the whole of India, the general perception was emerging that the international legal order will be contracting in its influence and applicability.

On public reaction, the four cops were fired from the department. On the criminal side, initially till May 31, 2020, only main accused cop Derek Chauvin was arrested and charged with less than full murder charges

Cases like Edward Snowden and signing into the International Criminal Court generated research and emotions till 2016-17. The killing of Jamal Khashoggi case got spotlight, but could not become consequential in terms of international human rights law.

Status of police reforms in the USA

The scene of policing in the US is complicated. The function of policing is discharged at various levels. The federal, state, local, tribal and special police forces combine to make the total number of police organizations over 17,985 as per the census of 2000 conducted by the Bureau of Justice Statistics (BJS). But for the sake of this write-up, local police is in consideration as local police of Minneapolis handled the George Floyd case.

Four officers of the Minneapolis Police (MP) killed George Floyd in an arrest-related death. The use of force by police officers in case is hardly justifiable on the grounds of safety and crime control as the allegation against George was that he allegedly used a counterfeit bill of 20 dollars at a convenience shop.

Read more: Learning rule of law from the jungle

The footage of the killing is in circulation in social media; its analysis shows that all the four police officers were relaxed while dealing with the situation. The attitude of the main accused, a white cop, Derek Chauvin, reveals that the police culture of Minnesota Police department lacked accountability.

The police leadership of the department did not act promptly, leading to the protests, which engulfed the whole of the US. Earlier on August 9, 2014, a Ferguson police officer killed a black Micheal Brown by firing at him. The excessive use of force was protested then.

In response, the then President of the US, Barack Obama constituted a Task Force for 21st Century Policing. In its report, the Task Force identified six pillars of policing. The first and most crucial pillar was trust and legitimacy of the police force. It was noted that police officers should not behave as an ‘occupying power’ and it should not be militarized.

Furthermore, police officers should not be trained as warriors but as guardians to elicit trust and legitimacy of people. The implementation status of the report shows that it was not taken seriously as it made recommendations, which were not binding. 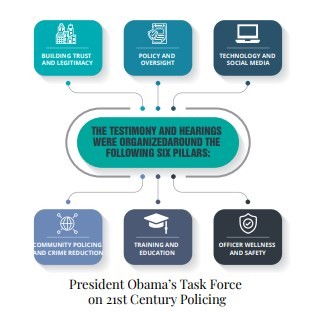 Only nine out of over seventeen thousand police organizations adopted some recommendations! There is generally not much expected from the Federal Government to affect police reforms in a city as the function of policing is local, and the local government decides on the improvements.

Unfortunately, the city level reforms are always tactical, wherein, techniques of chokehold and use of force are regulated without introducing wholesale change affecting all the aspects of policing or transforming the mindset of the police officers.

On public reaction, the four cops were fired from the department. On the criminal side, initially till May 31, 2020, only main accused cop Derek Chauvin was arrested and charged with less than full murder charges. The other three police officers were also later charged on the criminal side and were set on bail on June 5, 2020.

On the same day, owing to mounting pressure, the US Attorney General and a close aide of President Trump, Will Barr, also announced opening up ‘independent investigation’ against the officers at the federal level. The accountability of the cops has been initiated on public pressure, and no qualitative change for an internal check on such incidents has been proposed so far.

The police leadership and supervisory levels have not faced any consequences that could ensure course correction in future. Social distancing in times of COVID did not deter people from carrying out protests. This deference of the people to human rights at the cost of exposing themselves during COVID deserves to be explored further to identify how individual rights and collective rights interplay in times of adversity.

What is in it for Pakistan

Pakistan can draw many fruitful lessons from the whole episode of George Floyd. First, it must put its justice sector in order. Police reforms should be seen as part of justice sector reforms. No justice, no peace is not only a slogan, but also a reality.

Secondly, after consulting the constitutional experts and looking at the latest case law that declares police to be a concurrent item for legislation, a national police law may be introduced. The police organization should be made independent to decide about its internal governance issues; its external accountability mechanisms be made democratic and broad-based.

Also, there is a strong case to measure the problems of justice sector by collecting data on the lines of the Bureau of Justice Statistics to regulate the expenditure on the sector. The statistical basis of justice sector matters will help to evolve evidence-based decision making by the executive.

It will also help in planning innovatively where technology must be introduced to lessen the burden of human resource expansion on police organizations in Pakistan. The coordination and leadership role for the police, prosecution, forensic agencies, prisons and corrections services be brought into the hands of specialists to ensure that professional standards are not compromised.

The case of George Floyd has assumed symbolic value at international level. The receding multilateralism at economic fronts has got an opportunity to regain its space in the justice sector by bringing together countries to work for health and justice-related securities that could supplement the traditional security apparatuses of the countries.

Kamran Adil is BCL from Oxford University and writes on international law. He currently serves as the Additional Inspector General (Establishment) for the Islamabad Capital Territory Police.

A move towards digital banking