Trump tweets thanks to Pakistan 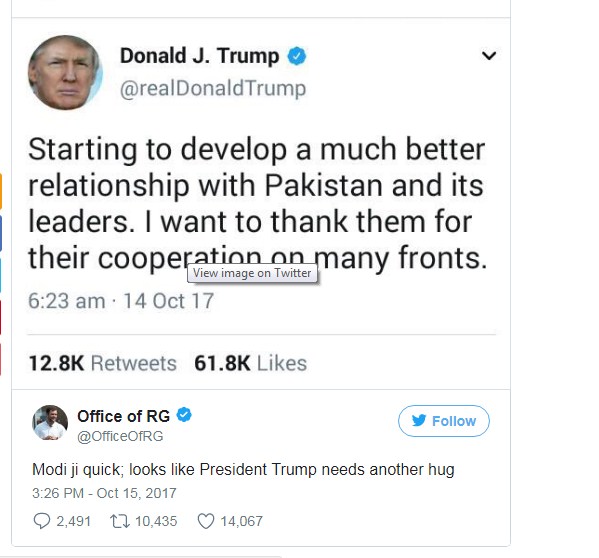 Donald Trump, on October 14, tweeted that the US is starting to develop better relations with Pakistan and thanked it for better cooperation on ‘many fronts’.  The day earlier he had also during a press conference thanked Pakistan after it freed the American hostages from the Taliban.

Similar words were spoken by the US state department’s spokesperson, Heather Nauert. “I want to be clear on saying how grateful we are to the government of Pakistan. Without their assistance, this would not have been made possible,”

Starting to develop a much better relationship with Pakistan and its leaders. I want to thank them for their cooperation on many fronts.

Ms. Nauert went on to say that “Our overall relationship with Pakistan …We’ve certainly had points where that relationship has had some challenges. That relationship isn’t going to just turn around overnight, but this is a terrific step in the right direction,”

Read more: Will the rescue of the hostages be.the positive turning point between Pak-US relations..

On Thursday, a US interagency delegation; representatives from the Pentagon, the state department and the Whitehouse arrived Pakistan and held meetings. The primary purpose of the meetings was to discuss how to achieve the objective of defeating terrorism to sustain peace and prosperity in the region.

The delegation from the US included many senior officials, including the acting Assistant Secretary for Defence David Helvey, acting US Special Representative for Pakistan and Afghanistan Alice Wells, US Ambassador David Hale and other officials.

Starting to develop a much better relationship with Pakistan and its leaders. I want to thank them for their cooperation on many fronts.

The US delegation held the meeting with Pakistani Foreign Secretary Tehmina Janjua and visited the Chief of the Army Staff (COAS) General Qamar Javed Bajwa separately, where consensus was reached between the parties to continue the bilateral talks.

Post the announcement of the Trump’s administration’s strategy in Afghanistan, in August, a significant strain on the bilateral relationship had emerged. Both sides traded a barrage of soft tirades and a US delegation led by Alice Wells that was due to arrive in September was told to hold off on their travel. This is the first delegation that has arrived after the strategy was announced; it is an effort to rekindle the frosty relationship.

In an attempt to present himself as more of a serious and astute politician, Trump put forward his future strategy in Afghanistan and South Asia. In his speech on Afghanistan, Donald Trump scolded Pakistan for allegedly failing to use its position efficiently despite the hefty financial backing of Pentagon.

India’s brutality in the Indian held Kashmir and the repeated unprovoked attacks on the Pakistan held Kashmir were topics of discussion. Pakistani authorities also gave a detailed account of the Indian efforts of sabotage and provide support to those attacking Pakistan

Trump accused Pakistan of nurturing safe havens for terrorists and allowing them space to operate successfully which as he put it eventually disrupts the peace process envisioned in Afghanistan by America. Trump directly accused Pakistan of playing a dual role in the fight against the insurgents. The US president delivered exactly what the US media and war mongers in the country wanted.

President Trump also sparked the controversy in Pakistan by envisaging a more significant role for India in Afghanistan. This did not go down well in Islamabad.

Pakistan had responded in a meaningful and confident manner against the Trump aggression.

Pakistan has continued to make wholehearted attempts to clear its position on the accusation labeled against its sincere efforts to uproot the evil of terrorism on its soil. After the initial coldness and uproar in Pakistan, Pakistani officials started engaging the US. Prime Minister Shahid Khaqan Abbasi met US Vice President Mike Pence on the sidelines of the United Nations General Assembly in New York in September. Later, Foreign Minister Khawaja Asif, during his visit to the US, also held talks and explained Pakistan’s position with more rigor and frank manner.

That relationship isn’t going to just turn around overnight, but this is a terrific step in the right direction

After some diplomacy, this was the first high-level engagement between the two countries, since the new Trump administration took power in January 2017.

By starting this new dialogue, Pakistan and the US have reaffirmed their commitment to continue their efforts to boost the war against terror. And, are reviewing reasons for mistrust and strain in the wake of the new US policy. Meetings by General Qamar Javed Bajwa in Afghanistan and the freeing of the American hostages have set a stage for more positive environment between the two countries.

The recent visit of the COAS General Qamar Javed Bajwa to Kabul was aimed at addressing the mutual mistrust, resolving the concerns of Afghans related to the status of refugees and border management. The US delegation briefed the COAS General Qamar Javed Bajwa and civilian officials on new US strategy for the region. The peace process of the region in the context of Pak-India relations and Afghanistan’s trust deficit were also discussed.

The recent visit of the COAS General Qamar Javed Bajwa to Kabul was aimed at addressing the mutual mistrust, resolving the concerns of Afghans related to the status of refugees and border management

Islamabad has raised the matter related to the attacks from across the porous border shared with Afghanistan. Similarly, in both the meetings held with COAS and foreign office officials, India’s brutality in the Indian held Kashmir and the repeated unprovoked attacks on the Pakistan held Kashmir were topics of discussion. Pakistani authorities also gave a detailed account of the Indian efforts of sabotage and provide support to those attacking Pakistan.

Read more: Trump may cause fresh spike in Pakistan-India tensions

Whether this is the beginning of new positive relations between the two countries really depends on the ability of the Pakistanis to explain their position to the USA and show how this is conducive to peace in the region. It needs to persuade the current administration of necessity of talks with the Taliban to help bring a more peaceful region and working together to remove the threat of ISIS in the region.