The unrest sparked by racism in the United States has caused many ethnic minorities there to rethink their behaviour and push for change in their communities. Arabs, Afghans and Hispanics are taking the lead in the protests and reeducating their people. 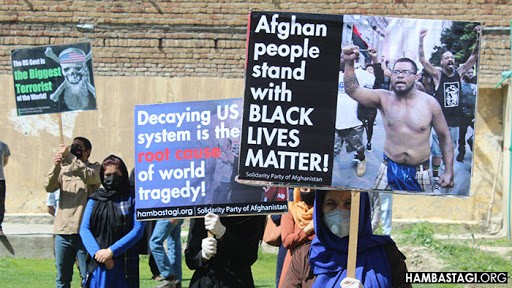 George Floyd’s shocking death in police custody has prompted many minority communities across the country to begin reflecting on their role in combating systemic racism. US minorities have been forced to rethink their position on the issue of racism in their adopted country, and have been a sizeable part of the protests that have enveloped the United States.

#BlackLivesMattters too all allies of the black lives matter movement, I love all the support yall doing but the biggest impact you can have is by using your power to hire ethnic minorities, don't let racism run in places of work and don't let your friends and family be racist— ahmed ahmed (@ahmedah79844335) June 6, 2020

The posters began appearing at protests rocking the United States, all with the same message of support — Arabs, Latinos and South Asians for “Black Lives Matter.”

Afghan Americans in the spotlight as US minorities forced to rethink

Arash joined the protest outside the White House in Washington. Next to him, a friend carried a sign: “Afghans for Black Lives.”

For the 32-year-old, the time had come for Afghan-Americans to reflect “on their own complicity in anti-black racism.”

“We borrow and steal from African-American culture: the way we dress, the way we talk…. But we still do not pay homage to them and, on the other hand, Afghan-Americans are complicit in terms of calling the cops on their neighbors and not realizing what the consequences are,” Arash said.

This question of complicity, either tacit or unintentional, is one on which many Arab-Americans also have begun to reflect.

Particularly when it was revealed that the 911 call that ultimately led to Floyd’s violent arrest and death when a white police officer knelt on his neck was made from a convenience store owned by an Arab-American man.

The owner, Mahmoud Abumayyaleh, explained that his employees had followed normal protocol in calling the police to say they suspected Floyd had used a counterfeit $20 bill.

And it was Abumayyaleh who told the one of them to record the scene when she contacted him, terrified by what she saw during the arrest, he later told reporters, visibly overwhelmed.

“Let’s not forget who knee was on George’s neck!” he wrote on Facebook.

The fateful telephone call has sparked much debate between those who say the store employees had no way of predicting the tragic outcome, and others who believe that members of minority communities — who are often victims of stereotyping and prejudice themselves — should only call the police sparingly, considering the potential risks.

“In many major cities across the US, Arab-owned corner stores are concentrated in predominantly Black working class neighborhoods. We need to examine how we are showing up to support the Black community, and what steps we are taking that do not involve reliance on law enforcement,” states a petition titled “Arabs for Black Lives.”

Notable signatories include US Congresswoman Rashida Tlaib, who is Palestinian-American, and Egyptian-American actor Ramy Youssef.

“We must have the vital conversations within our own families and with our loved ones about things we can do to ensure we actively do anti-racism work,” the petition says.

In order to do so, many people have begun creating guides to discuss anti-black racism in their community.

Watch Dr. Mooed Pirzada discuss the ongoing unrest in the United States and what it means for the future:

One of them, which has been shared hundreds of times on Facebook, calls on Arabs to learn about the history of slavery among their ancestors and to stop using derogatory terms to discuss black people, among other steps.

Another, aimed at the South Asian community and that thousands of people have reacted to on Instagram, provides readymade key phrases in order to counter the anti-black prejudices of their “moms, dads, aunties and uncles.”

Many argue that this reckoning must also include acknowledgement of colorism — discrimination against black or dark-complected members of their own communities.

US minorities forced to rethink: Hispanics take a lead

When she saw Hispanic protesters waving signs that read “Latinos for Black Lives Matter,” Yvonne Rodriguez — who describes herself as “unapologetically Afro-Latina” — was not particularly enthusiastic.

I don’t tweet often, but I will now to make it clear to those who follow me: black lives matter. Minorities lives matter. I fully support the side of the oppressed. If you disagree with any of those statements, God bless you. I’ll be praying that you reevaluate your opinion.— Sir Roach, The Sword of the Morning (@ElijahRoach13) June 3, 2020

“I think it’s about time,” said Rodriguez, the daughter of Cuban immigrants who lives in Miami. She said that as a black woman, she often feels a lack of acknowledgement from European-origin Hispanic people.

“If we’re talking about white America, black America, it’s the same across the board with Latin Americans,” said Rodriguez, who took matters into her own hands and created the “Afro-Latino professionals group” in order to boost their visibility.

BJP: Muslims who stayed in India did not do the country a favor

“Law and Order!”: Trump sending more troops into US cities